I am in kindergarten, I am 12, I am in college, I am the daughter of an Egyptian immigrant, and so much more

I am sitting on the floor of my kindergarten classroom. We are going around the circle, saying our favorite thing that we did that weekend. On my turn I tell the class that my mom and I had a slumber party. I am talking about a Friday night tradition that my mom and I have where we set up an air mattress in front of our living room television and fall asleep to the antics of various cartoon characters.

When I am done talking, my teacher asks if this ritual is founded in Egyptian tradition. I’m taken aback. My mom and I started having slumber parties for many reasons: At five years old, I refuse to go to bed before 10 p.m. I am also terrified of the dark, so someone needs to stay up with me. I’m an only child, and this is a fun way for my mom and me to bond. I could think of maybe a couple more reasons, but none of them include the random fact that my mom is from a different country. 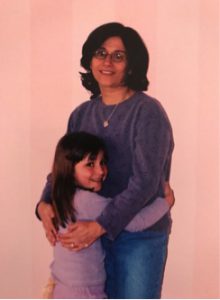 My mother Farida and me. March 2003. (Photo credit: Steven Cherry)

I give a confused explanation to my teacher and class. I’m a shy child and and speaking for more time than necessary to the whole class makes me uneasy. I also feel upset and frustrated because I feel like my teacher is correcting me. I feel like I said something wrong even though I didn’t. I know my own life and family better than she does.

Now, reflecting on this incident, I don’t think that her intention was to make me uncomfortable. She was most likely trying to come across as understanding and interested. She knew my mom had immigrated from Egypt. Still, she made me feel like I was strange. She took something that I thought was normal and turned it into something different by projecting her ideas of who my family was onto it. Her misguided attention made me feel embarrassed. 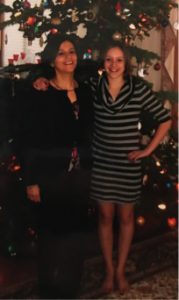 I am twelve. I’m working on a school project with my neighbor. He tells me that my mom can’t even speak English. He says that she is from Africa and that makes her stupid. I am taken aback. My mother first came to America on a student visa to earn a PhD in pharmacology from Ohio State. She spent 15 years in neuroscience and became a pharmacist when I was born. She is one of the smartest people I know. She also speaks English fluently. I know she has an accent, though I personally can’t hear it. I’ve never noticed that her language has impeded her ability to communicate with others.

This time, I’m not confused or uncomfortable. I am angry. Is this simply the aggressive ignorance of a pre-teen boy? Even so, it’s a lie. He’s twisted my mother’s background to make her into something that she’s not, and I don’t have a response that is both powerful and eloquent.

I am in college. People are thrown when they find out I’m half-Egyptian. Unlike people from home, my friends at Northwestern don’t know that this is part of my identity. If I want them to know, I have to tell them. I am met with a variety of responses, almost all a derivative of the observation that I don’t look Middle Eastern. 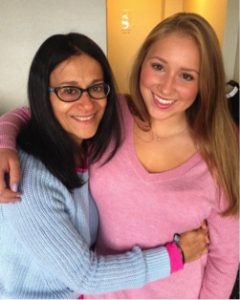 People ask to see pictures of my mom and respond in surprise. Her hair is coarse and dark. Mine is fine and light. Her skin has deep, olive undertones; mine is fairer and pink. I look different because I have only half of my mother’s DNA. While it might be surprising that we look different, it’s more jarring that her appearance is what comes to mind first when people find out she’s an immigrant. Her decision to leave the only life she’d known at the age of 29 and enter a country seeking the promise of a better education, more career opportunities as a woman in science, and religious freedom is far more fascinating than her complexion.

I am the daughter of an immigrant. Despite living in a culture that preaches diversity, the acceptance of diversity strains us all. There is prejudice and confusion surrounding what it means to be an immigrant. In my experience, assumptions and misunderstandings, sometimes cruel ones, emerge from notions that being an immigrant is the defining, and limiting, part of that person’s identity. For my mom, she’s an immigrant, a mother, a scientist, a woman and a person. And so much more.