The penetrating sound at the center of my Dominican community

The raking, grating sound of the güira punctuates the humid and heavy South Texas night air. It’s the wee hours of the morning and Tio Julio, the lean, bald-headed life of the party, has broken out his güira, an instrument that is fundamental to the merengue and bachata music that soundtracks these events. He attempts to play along to the music of Juan Luis Guerra, Wilfrido Vargas, and Elvis Crespo, as the adults laugh and dance and the children doze off on the couch.

I’m three years old. I’m seven. I’m twelve. It’s my quinceañera. It’s my first time home from college. It is every birthday, anniversary, and holiday party within our Dominican community for the twenty-or-so years that we’ve lived in the South Texas border town of McAllen.

Julio Saviñon, while not technically my tio, or uncle, but also too close to my family and me to call him anything less, is the father of my best friend Camila. Both of our parents are Dominican immigrants living in the Rio Grande Valley, and we’ve known each other for longer than we have memories. It wasn’t rare for me to come home from a long day of school to find both of our mothers engaged in light-hearted gossip over a cup of coffee about family back on the island. From celebrating many of our birthdays together, including our quinceañera, to countless sleepovers, our families raised us together within a 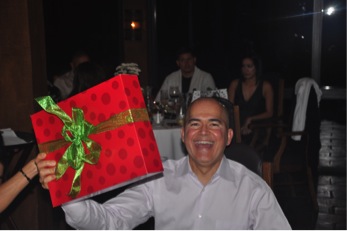 From his booming voice that rises from his chest when he’s moved to sing of his philosophical, metaphor-heavy worldview and carefully-crafted opinions, as well as the readiness with which he brings out the güira at any party, he’s like no other. Dinners of rice and beans accompanied Tio Julio’s unprompted rants about mankind, his experiences living in the United States, or the expected “when I was your age on the island” sermons that either engaged us in conversation or overwhelmed us with their depth.

To this day, the rants continue each time I visit the family’s home. Whether about his adoption of Buddhism, his forays into veganism, or his resentment of technology – all of which are set interestingly parallel to the highly Catholic, meat-heavy, Facebook-dependent traditions of the Dominican community – they are highly intellectual, and these quirks are part of what makes him so central to the community. He even organizes monthly tertulias, or discussion circles, to talk about topics ranging from Dominican politics to passion projects, such as photography. The knowledge he has can strike awe in even the most accomplished scholar. Despite his hatred of social media, any time I log on to find a comment of his on one of my op-eds for my college paper, The Daily, there’s a sense I’m doing something right.

Much like the güira, the immigrant transition is anything but smooth. The raised steel bumps that cover the güira’s hollow, cylindrical frame are uncomfortable to the touch, but when struck at the right speed and angle help create the beautiful music at the center of our Dominican culture and heritage. Tio Julio, with all his eccentricities and his love for discussion and dancing, strikes a harmonious rhythm within our community that brings us together.

On the days when being away from home is particularly difficult, I often find myself returning to the music that is so strongly tied to childhood, adolescence, and family. I’ll catch myself dancing merengue alone in my room with a smile plastered across my face, imagining the plates of warm fried pastelitos and the sweating glasses of rum and Coca-Cola that have stained the rental tablecloths, and I’ll see Tio Julio on the dance floor laughing rapturously, playing the güira to his heart’s content.