The phone rings and Aunt Paoola can smile again

Every day this week, after I finish my second-grade math homework, I’ve run up to Paoola’s room and play games with her. Paoola and my uncle are visiting us for the week at our family home in Turkey. 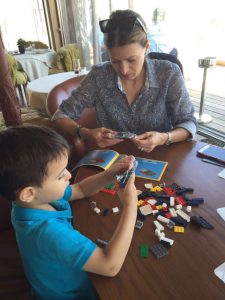 Just when we start playing Snakes & Ladders, her phone rings. Again. She runs toward the sound and answers the call with a huge smile on her face. I wonder who calls her this much? Immediately after answering, my aunt Paoola, starts speaking in a fast pace. I can’t understand a word she says, but I can feel the excitement in her voice. I watch her talk, amazed at her usage of hand gestures and a high-pitched tone. The rapid pace of her voice makes me wish I could speak Spanish.

Paoola hangs up the phone with an even bigger smile on her face. When our eyes meet, she says that the calls are from her mom, whom she misses a lot. I know so little about her heritage. I know nothing about her life before the U.S., so I gently ask about her life in Colombia and why she chose to leave. She pauses. She looks down and her smile flattens. I immediately feel guilty. Even though I’m curious to learn about her past, I tell her that we don’t have to talk about it if she doesn’t want to. After a minute, she starts telling her story.

She says that her dad is Lebanese and her mom, Maria, Colombian. She doesn’t remember her dad. Apparently, he left when Paoola was just a baby and never came back. Her mom took care of her and her baby brother Dan. She says that when she was a kid, they lived in Colombia, which was beautiful. Maria owned a considerable amount of land, and was earning money off it. They were well-off and happy, living in a comfortable house, until one day.

She woke up to loud noises of Maria having an argument with a couple of scary-looking men. Paoola was eight at the time. Her brother Dan, five. The day after the huge argument, Maria told them that they were leaving Colombia. The plan was that the three of them were to travel to the U.S., and after placing the kids with some friends, Maria, would go right back to Colombia, in the hopes of getting their home and land back. Maria wanted to keep fighting for their lives in Colombia. She was up against the drug cartels.

I have a million questions. I ask if it was even possible to win against the drug cartels. She shakes her head and says that their mom fought for a long time but was never successful. She and Dan didn’t have much of a home for the few years it took for Maria to finally decide to give up. After this huge loss, Maria moved to the U.S. but they had nothing. No money, no home, no family, and they were immigrants. It took them at least a decade to be able to see America as their new home.

I am shocked, but I can see why Paoola is always so happy to answer her phone. Today, after many years, even though they are all safe and happy living in the U.S., every phone ring is a reminder that it all can be taken away.