I pour the melted cheese on top of my potatoes and prosciutto, watching how my neighbor Gaëtane does it so I get the technique exactly right. We place pieces of cheese on the piping hot raclette grill in the center of the table, wait for them to become melty and bubbly, then slide them onto our plates over the vegetables and meat.

On this cold night during winter break with 2017 looming, the gooey cheese does a great 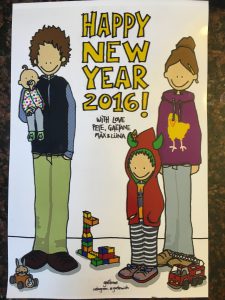 job of warming us up. Although raclette is a dish (and type of cheese) originally from Switzerland, Gaëtane tells me that she often ate it growing up in Belgium, her home country. My family and I gather around the table with her American husband, Pete, and her two small children, 5-year-old Mäx and 2-year-old Lüna, to enjoy the meal, talk, drink Belgian beer (even my 19-year-old twin sister and me), and relax for several hours, in the typical European fashion that Gaëtane introduced us to. One of the best things about our families’ relationship is the recurring exchange of recipes and dishes. Our neighbor often invites us next door to share meals and treats like her homemade sugar-coated Belgian waffles, but this is the first time we’ve tried decadent raclette together.

Gaëtane Michaux immigrated to the United States from Brussels in her early 20s and became an American citizen several years later. When she came to the United States 15 years ago, she left behind her mother and sister to find work as an architect in New York City. She knew no one and, as a native French speaker, had trouble communicating. Eventually, she married Pete, a fellow architect, and had Mäx and Lüna several years later. When they moved into the house next to ours in a quaint suburb just outside of Philadelphia four years ago, our families immediately became friendly. Since I was studying French at school, I jumped at the chance to babysit and read bedtime stories to the bilingual kids, who would often correct my grammar and vocabulary.

Gaëtane has gotten more comfortable with American culture in many ways since she first set foot in the U.S. In addition to becoming a citizen, she has a job as a store designer for an American company, Panera, and she speaks English at work and with the many American friends she has made. This acculturation, and the fact that she lives thousands of miles away from the rest of her family, means that she often feels very distant from her home country and culture. So, cooking dishes from her childhood like raclette and sharing them with others helps her connect to her past, growing up in Belgium. Food is one of the ways Gaëtane holds onto her cultural identity.

As an aspiring food writer, this really strikes a chord with me.

It my be a cliché, the idea of the U.S. as melting pot, salad bowl, or whatever you want to call it, and food is one of the essential ingredients in this mix of cultures. American cuisine is a diverse, vibrant combination of flavors and presentations that would never have been possible without inspiration from cultures all over the world, brought to our country by immigrants.

When I think about how food allows Gaëtane to connect to her Belgian roots and how proud she is to share it with outsiders like my family and me, I realize the crucial role it plays in learning about others and breaking down barriers between different groups of people.

After all, everyone has to eat, and a dining room table is the perfect place to get to know someone – it’s where I learned Gaëtane’s story, over raclette, beef stew, Liège waffles, crêpes, and beer.

Sometimes I feel disillusioned with the idea of writing about food when there are so many scary, serious issues in the world nowadays. However, seeing how food helped me get to know my neighbor and how it strengthened the relationship between our two families reinforced my faith in my decision to turn my passion for food writing into a career.