Korean-Americans for Trump: Hearing from an emerging minority within a minority

When he observes Korean-American neighborhoods in his hometown of Los Angeles, Joseph Kim is not pleased.

“I have never seen the Korean-American community in such bad shape in my life,” says Kim, a database services manager. “I see this firsthand. Small businesses are going out of business. For the first time in my life, I see Korean-American homeless people. People are just desperate.”

Kim, a proud supporter of Donald Trump, attributes many of the struggles to the Obama Administration. Los Angeles is the American city with the highest number of Korean-Americans, according to the 2010 U.S. Census.

“The fact of the matter is, the last eight years under Obama have been very, very bad for the Korean-American community,” Kim says. “I know the Democrats have been saying that the economy is great, but I just don’t see that. And neither do most Korean-Americans.

Before the 2016 Presidential election, Lisa Shin, a daughter of Korean immigrants, jumpstarted a group called 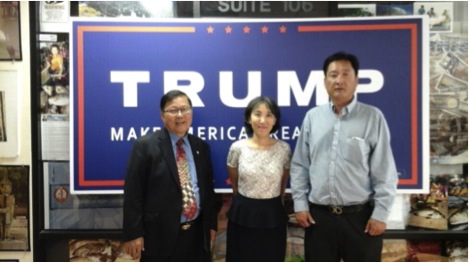 “Korean-Americans for Trump,” which has a website and a private Facebook group consisting of Korean-Americans with similar pro-Trump views. Shin, who spoke at the 2016 Republican National Convention, proclaims that the group is a “minority within a minority,” but some fellow supporters don’t quite see it that way anymore.

“When you look at the demographics now, I would venture to say that the Korean community does very well in school, they do very well financially and they do pretty well in business,” says Tae Kim, a Korean-American attorney who immigrated from Korea to America in 1979. “If you look at their values—family first, education, pulling yourself up by the bootstraps—they almost entirely line up better with the Republican ideas and the Republican views. … Have I seen people actively against Trump? Not in the Korean community, no.”

Leading up to the 2016 election, immigration reigned supreme in many debates. According to Pew Research Center, 70 percent of voters labeled immigration as “very important” to them. But Tae Kim points to the pervasive discussion on unauthorized immigrants as frustrating for Korean-Americans.

To Tae Kim and other Korean-American supporters such as Julie Cho, who emigrated from Seoul in 1987 and now works at the Korean American Association of Chicago (KAAC), Trump’s rhetoric to crack down on illegal immigration is appealing,

“Some of what I hear from first generation Korean-Americans is, ‘Why should I feel bad for these people who came illegally?’” Cho says.

Cho also draws a line between the perspectives of the Korean-American community and those of the Latino community.

“Koreans who come here are more privileged in Korea. Many Mexicans are crossing the border because they are desperate. Koreans are not as desperate. They have to fly here. They have to buy the plane ticket. They don’t have the same desperation.”

Tina Melton, a Korean-American Trump supporter who works in Maryland Governor Larry Hogan’s Office of Community Initiatives, voted for Barack Obama. She and her family immigrated to America when she was four years of age.

“Now that immigration is such a big issue for Trump, I feel that the immigrants are being forced to be in this identity politics just because we’re immigrants,” Melton says.

In March, Melton was part of a group that lobbied against a sanctuary bill—one that would establish a safe-haven of sorts for unauthorized immigrants—in Howard County, MD. In May, the New York Times ran a story highlighting the “surprise foe” of sanctuary bills in Maryland: legal immigrants.

Politics back in Korea play a role as well. Cho adds a claim that among first-generation Korean-Americans, Trump support is rampant due to his handling of the North Korean situation.

“The general feeling is that they’re very happy [with Trump],” Cho says. “They say, ‘Thank God it’s not Hillary.’ If it was Hillary, it would have been a continuation of what Obama did, which was nothing. Korean-Americans hated candidate Trump because of the things he says, but President Trump, due to his handling of North Korea, is approved of.”

According to Itak Seo, who is set to be the next president of KAAC, the value of local business to the Korean-American population and Trump’s appeal to business owners are a natural match.

“The stability of the economy in the Korean community is not in a good state, especially beauty businesses, dry cleaning businesses—those businesses are going down,” Seo says. “In Trump, people are expecting some type of improvement in every industry. The Korean community thinks that’s the proper way of managing the country.

“Also, students in the Korean community are having trouble finding jobs after college. So they are looking for some type of policy that would create a job because of the Trump administration.”

While Cho and Tae Kim indicate that Trump support is surprisingly widespread in Korean-American communities, data still illustrates that 70 percent of Korean-Americans identify as Democrats. However, Trump supporters like Andrew Suh, could be indicators of a trend. A 27-year-old data analyst from Philadelphia, Suh is a registered Democrat. He voted for Bernie Sanders during primary season but shifted to Trump for the general election. He says Trump’s “America first” message appealed to him as a part of a community where many of his friends are small-business owners. He considers such social justice issues as race relations to be over-covered in the media.

Post-election polls have indicated Asian-Americans’ support of Hillary Clinton. An Asian American Legal Defense and Education Fund poll reveals that, of 14,000 Asian-Americans polled, 79 percent voted for Hillary Clinton in the 2016 race, with only 18 choosing Trump. Of that number, 84 percent of Korean-Americans selected Clinton and 14 percent Trump. But Cho, who admits she voted for Trump only because of her distaste for Clinton, senses Republicanism among Korean-Americans may be on the rise.

“But how are they going to realize that? I don’t think they will,” she adds. “Most of them own businesses, they are very heavily anti-union, they want lower taxes, a stronger military and are anti-LGBT.”

Cho, who tends to vote Republican, says she thinks the large majority of Korean-Americans who vote Democratic do so because they incorrectly view the Democrats as “the party of minorities.”

Amina Khan, an Indian-American lawyer in Chicago, is anti-Trump. But looking at her Indian father who voted for Trump, she opines that members of different minorities voting for Republican candidates represent a goal of Americanization, one that applies to Indian-American Trump supporters as well as those to those in the Korean-American community.

Joseph Kim recognizes that Korean-American—and, in general, minority—Trump supporters are statistically a minority, but he senses that they are a rapidly growing one.

“We proudly represent a minority in the Korean American community,” Joseph Kim says. “But there is a growing support of Trump. We’re a minority, but a vocal minority.”