At a time in the United States when many immigrants — whether documented or undocumented — feel under threat and under suspicion, Chicago’s Chinese community is thriving. Recent developments, such as the establishment of a new library, construction of a new field house, and the election of the community’s first Chinese state representative are all signs pointing towards a flourishing community.

But with what appears to be growing anti-immigrant sentiment in the U.S., there is a sense of unease among Chinese Americans. “I am personally more worried because once they finish targeting the Hispanic community they are going to come for the Chinese and Indian communities. That’s because those communities have disproportionate H-1B visas where they get a work permit to work in special occupations,” says Debbie Liu, who works as the Community Development Coordinator for the Coalition for a Better Chinese American Community (CBCAC), an organization, based in Chicago’s Chinatown, that works to empower Chinese communities throughout the city.

This fear of what may come has turned into action. A coalition of Chinese-American organizations is working with other immigrant groups to pass legislation that would draw a line between federal and immigration law enforcement officers on the one hand, and state and local law enforcement in Illinois on the other hand, according to Brandon Lee, Communications and Research Coordinator at Asian Americans Advancing Justice-Chicago. Currently, local law enforcement officers are empowered to facilitate deportation proceedings once an individual is arrested, even for minor offenses. Under federal law, U.S. Immigration and Customs Enforcement (ICE) deputizes state and local officers under its 287(G) program to help enforce the nation’s immigration laws. The program provides four weeks of basic training for officers, and currently partners with 42 law enforcement agencies in 17 states. In one of President Trump’s executive orders, he pledged in January to ramp up the partnerships.

In Illinois, though, four prominent jurisdictions – Cook County, Chicago, Evanston and Oak Park – have rebelled and declared themselves to be sanctuaries or “welcome” places, which communicates to immigrant communities that their law enforcement officers are not cooperating with federal immigration authorities. The Trust Act, as the proposed state legislation has been dubbed, features these key provisions: no deputizing of state or local police to serve as immigration agents, no assistance with federal registries and databases that provide country of origin, religion, or immigration status, and no federal immigration agents making arrests in schools, health institutions, Secretary of State facilities, or courthouses unless presenting a court-issued warrant.

The bill passed both houses of the Illinois legislature and is headed to Governor Bruce Rauner’s desk for consideration. 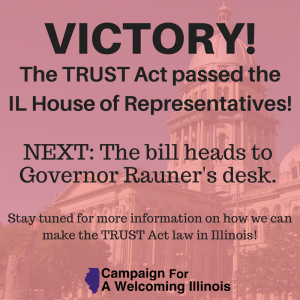 “There is no official calculation of how many undocumented immigrants there are. There are all kinds of estimates. But most of the estimates come from studies outside of Chicago. So it’s hard to tell. But there certainly is an undocumented community within the Chinese community,” says Liu.

The community is aware of its composition, its current condition, and its future. Its success is neither anything new nor is it just a direct response to the growing negative sentiment towards immigrant groups. The Chicago Chinese community’s prosperity was generations in the making, and is the result of institution-building and the harnessing of political capital.

“We came to a realization that we’ve been here for a long time and are an integral part of [the greater Chicago area],” says C.W. Chan, chairman of CBCAC.

The “we” that Chan is referring to is the Chinese portion of the 166,770 Asians who live in the city of Chicago. Although the Chinese community today is not solely existent in one particular area or neighborhood. It’s broad.

“[The Chicago Chinese community] consists of any individual who is ethnically Chinese,” says Liu. But there are definitely areas where the Chinese population is more concentrated, such as in the 60616 zip code, commonly known as “Chinatown.” It spans over South Wentworth Street, South Archer Avenue, South Canal Street, West Cermak Road, and West 18th Street. It’s accessible to the rest of the city via the CTA’s red line, with an exit at the Cermak-Chinatown stop. 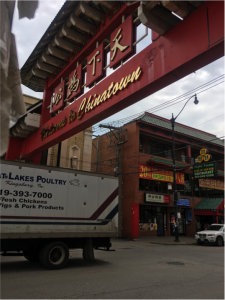 The area is filled with Chinese restaurants, traditional Chinese grocery stores, gift shops, and a slew of other service providers. Everything from the architecture of certain buildings to the writing on walls is connected to Chinese culture.

This attention to culture is on full display at the Chinatown Gate, which is just outside the el stop. The honks of trucks blare, the faint aroma of Chinese cuisine fills the air, and people wave as they walk along the sidewalk, taking in the environment.

“The commercial core is in the Amour Square neighborhood. But over the last 40 years, the Chinese community has grown over Bridgeport and McKinley Park,” Chan says.

Its history goes back much further.

“[Chinatown] was much smaller,” says Liu. “It was originally downtown. It started at Clark and Van Buren. But then it moved 100 years ago because of discrimination. You could say that the area was becoming more gentrified and then the Chinese moved their location.”

Chan explains how it was this move that allowed Chinatown to expand in the manner it has. Chinatown’s downtown location was too congested. But this is not all that has changed.

“[People of the community] used to be mostly people coming from southern China and Hong Kong. But now there’s an increase in people coming from mainland China and Beijing and speaking mandarin. There’s also also an increase in the amount of seniors living in Chinatown. The Chinatown that people think of, the business corridors, are mainly elderly people,” Liu observes.

According to 2010 United States Census data, there are 3,409 individuals who are 62 and/or older living in the Chinatown area. This fact shapes how those within the community are approaching plans for the its future. The planning itself has bolstered the Chicago Chinese community’s current state of prosperity.

“I think all communities should have a vision plan. The fact that [the Chicago Chinese community] did it and came out of the process with concrete plans and goals, speaks to the community, itself. On one level, it shows how the city really has not supported certain neighborhoods,” Lee says. “On another hand, it shows that Chinatown has put forth a strong plan to say ‘these are the things our community needs.’” 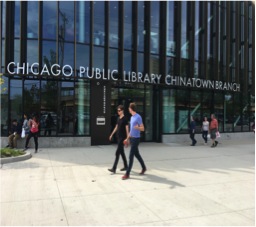 The vision plan has allowed the community to open an extension of the Chicago Public Library, establish a new field house in Ping Tom Memorial Park, along with galvanizing support for the first Chinese candidate, Theresa May, to be elected as a Democratic member of the Illinois House of Representatives. She serves as the representative for the 2nd District.

“[The CBCAC] was instrumental in the passing of the Voting Rights Act of 2011. This led to Chinatown being redistricted from four representatives into one single district. This allowed us to consolidate the political power. Also, over the last 10 years, we have conducted several highly successful voting registration drives and increased the registration by three times,” claims Liu.

The vision plan is not simply a list of goals on paper. Its web version is detailed, extensive and inspirational. Each goal within the plan is laid out and supported with specific strategies that the community is implementing in order to accomplish these goals. For example, one of the goals of the vision plan is titled, “Transportation and Circulation” and it is supported by research and an in depth break down of the specific areas that are of concern for the community.

“C.W. Chan knew that a big focus [of a community’s future] is community engagement and he took the opportunity to come up with some plans for the next 5-10 years and 100 years… But the CBCAC was really the originator of the plan. They’ve been working on implementation,” says Stephen Ostrander, a local planner for the Chicago Metropolitan Agency for Planning (CMAP), who works with the organizations on a quarterly basis.

These improvements along with the expansion of the community southwest into neighborhoods such as Bridgeport and McKinley Park demonstrate how the Chinese-American community is thriving. Still, many in the community feel vulnerable. President Trump’s executive order banning travelers from certain Muslim-majority countries and ICE’s stepped up deportation efforts have chilled the air for members of this bustling community.

Many wonder what lies behind the anti-immigrant rhetoric and executive actions. Esther Wong has an idea.

“I think it’s the white supremacy attitude,” she says. “And they are not thinking about the United States being an immigrant state. I think the general feelings of the current administration are definitely more towards white supremacy.”