What are working conditions like for immigrants in the restaurant industry?

Picture what the city, almost any city, would look like if there were no restaurants. That’s what Latino grocery stores and restaurants hoped to convey when on May Day, 2017, many shut down in support of the thousands of people who protested in more than 40 cities against President Trump’s immigration policies.

“It’s clear that the U.S. food system would not be able to sustain itself if it were not for immigrant workers,” Evelyn Rangel-Medina, director of the Bay Area chapter of Restaurant Opportunities Center United (ROC), said.

Notorious for low pay, long hours, and strenuous working conditions, the restaurant industry employs 12 million workers, according to Restaurant Opportunities Center United (ROC). In major cities like Chicago and New York, the activist organization reported that approximately 70 percent of restaurant workers identify as immigrants, while Rangel-Medina estimated that “over half of the restaurant workers in the Bay Area are immigrant workers.”

Despite being one of the largest industries in the nation, the restaurant industry continues to be one of the lowest paying. Undocumented immigrant workers especially face exploitation, as some employers withhold their pay due to their immigration status. Although these workers are protected by labor laws that require fair wages, many are unaware of their rights, and acquiesce to their employers’ exploitative practices out of fear of deportation.

Diana Robinson, campaign and education coordinator of the Food Chain Alliance, worked on a case in February 2009 to recover $1.5 million in unpaid wages to 550 workers from New York gourmet grocery chain Amish Markets. These workers were required to work 60 to 70 hours per week without overtime pay. Furthermore, some earned far below New York City’s minimum wage of $7.25, taking home four to five dollars per hour, amounting to $300 each on a weekly basis.

Although the immigrants involved in the Amish Markets case were successfully reimbursed, Robinson said that it is “difficult to collect data” about wage theft since many of the cases go unreported. The Economic Policy Institute (EPI) estimates that factoring in fears of termination or deportation, annual nationwide estimates of minimum wage violations exceed $15 billion each year, regardless of the workers’ immigration status.

ROC’s research has also shown that back of the house bussers generally receive no more than the tipped minimum wage across the country. The federal minimum for tipped wages was last raised to $2.31 in 1991, and has not been adjusted for inflation in more than 20 years or raised in certain states.

“Relying on tips as the base for your income really creates vulnerability to abuse,” Rangel-Medina said, adding that the tipped workers she has worked with often earn between $2.13 to $7 per hour.

The EPI has reported that the poverty rate of workers paid less than the minimum wage is over 21 percent, three times the rate of those who are paid the minimum wage. Some of these workers lose an average of $3,300 per year due to wage theft.

Another factor that contributes to these workers’ low wages is what Robinson calls a “racial gap” between the “type of work and positions that [restaurant] workers have.”

“Usually the front of the house is made up of white males and white women. As you get further in back of house, busboys, cooks, they usually tend to be people of color,” Robinson said. “Immigrants in the restaurant industry are stuck in positions that don’t have mobility to better paying positions.”

The racial divide between higher paying and lower paying jobs is clear, as 6.1 percent of dishwashers identify as white, according to ROC’s research. Because of this lack of mobility, women, people of color, and immigrants face “significant barriers” in obtaining liveable wage jobs, and only 20 percent of restaurant jobs pay a livable wage, wrote Saru Jayarama in Behind the Kitchen Door, after following the lives of restaurant workers in New York City, Washington, D.C., Philadelphia, Houston, Los Angeles, Miami, Detroit and New Orlelans.

In addition, Robinson said that white workers are more likely to receive positions in the restaurant workforce despite having the same credentials as competing workers of color. ROC’s research supports her statement, indicating that one-third of immigrant workers report being passed over for a promotion because of their race, while many other workers have never tried to seek a higher position because those roles are not occupied by people who “looked like them.”

Sean Quan, a chef for Chicago’s Michelin-starred restaurants like Alinea and Everest, said that he can clearly see the racial divide between front of house and back of house workers in the restaurant industry. He estimated that 75 percent of his coworkers in back of house jobs are Hispanic immigrants who immigrated from Latin America in search of better job opportunities. Meanwhile, front of house, “the area of the restaurant industry where people tend to make the most money,” consists mostly of white, middle-aged adults.

“When I was at Everest, there were the hard, work-force Mexican immigrants who have been there since the place opened 30 years ago,” Quan said. However, he also added that they have not moved onto higher positions, despite having the skills to do so. 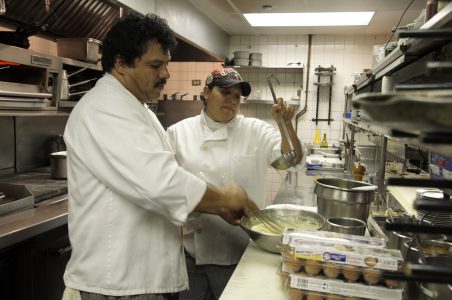 At Michelin-starred restaurant Everest in Chicago, Quan said that most of his coworkers were Mexican immigrants, a common occurrence in Chicago kitchens.

“Almost every single restaurant has at least one undocumented person working for them,” Quan said.

The chef added that issues with low pay extend beyond the circumstance for undocumented immigrant workers. Quan said that chefs’ wages are “not enough to survive,” yet there has been little progress to increase the pay of restaurant workers.

“I have a strong belief that… pretty much every single cook is being underpaid,” Quan said. “[Immigrants] kind of go into [the restaurant industry] because they didn’t really have option. They didn’t have much of a choice between what they wanted to do and what they needed to do.”

Although little progress has been made towards increasing the wages of restaurant workers, the industry continues to grow, due to what Quan calls the “gentrification of the food scene.” In the last 40 years, Americans have made dining out a frequent experience. ROC has reported that 50 percent of Americans eat out on a weekly basis, and more are anticipated to eat out each year. The National Restaurant Association (NRA) reported that the restaurant industry is projected to grow by 14 percent over the next decade, adding 1.8 million more jobs that will most likely employ immigrant workers. In April of this year alone, the restaurant industry added 26,000 jobs, according to Nation’s Restaurant News, which calls itself the the leading resource for business intelligence in the foodservice industry.

Due to the rapid growth of this industry, Quan feels that the already high demand for cooks is increasing, although there is little “willingness to pay more for the food to support back of house workers.” He said that the “inability to fairly compensate workers” will cause the “industry-wide bubble” to burst. 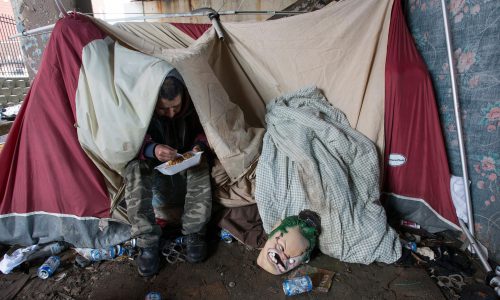 Mario is often angry at the Chinese restaurant owners for the low pay and the way they treat Mexican workers. 2016. [Photo credit: Lloyd DeGrane]

In a recent pictorial story in The Guardian – Homeless but employed: the Chicago restaurant workers living under a bridge, Kari Lydersen and Lloyd Degrane depicted vividly how some undocumented workers have chosen to live openly near Chinatown  and downtown.

Quan believes that in order to keep up with this growth, the industry must enforce a policy for higher wages, better health insurance coverage, and mental health services within the next ten years.

Activist organizations like ROC are working towards supplying the resources Quan believes are necessary. In order to help this large population of immigrants in the workforce, ROC provides services to educate workers about their rights to demand fair wages and protect themselves from economic vulnerability. Rangel-Medina describes her work as “[arming] them with the tools they need and the information they need to be able to advocate for their rights.”

“We’ve been doing training for employers and managers so that they know how to deal with immigrants in the workplace,” Rangel-Medina said. “The biggest challenge that these [undocumented immigrant workers] face in the industry are when their status is used by their employers as a way to silence them, or a way to exercise their labor rights.”

Rangel-Medina said that ROC provides various pillars of support to immigrant workers, including justice campaigns to prevent wage theft and help workers collect past wages. Founded in 2002, the organization has grown tremendously and now conducts research to support the case for fair wages for all workers.

In late December, ROC and Presente.org started the sanctuary restaurant movement to create safe spaces for both workers and customers to denounce discrimination. Since its inception, the movement has attracted 400 restaurants as members.

“Sanctuary restaurants are a campaign to create a place at the table for everyone,” Rangel-Medina said. “Especially when it comes to immigrant workers, while this industry is thriving and growing, and really becoming the base of the U.S. economy, immigrant workers live in a world that’s separate from most of the world that has the privilege to dine out.”

The rapid growth of the sanctuary restaurant movement and of ROC as a union for restaurant workers provides a strong indicator of the changes that the restaurant industry needs to undergo. However, shifting towards those changes will be extremely difficult within a wage system that has remained stagnant for decades.

Moreover, employers are reluctant to pay workers more, due to the financial strain it would place on restaurants’ revenues. A study that was published by the Harvard Business Review reported that a one dollar increase in the minimum wage leads to a 14 percent increase in the likelihood of a 3.5 star restaurant going out of business.

Quan emphasized that customers need to realize that they are paying more for just food when they dine out. Rather, when eating out, they are also contributing to the restaurant’s rent, workers’ pay, and several other factors that keep the business running.

“As working conditions have shifted the entire industry, there’s the need to develop a narrative and understanding that without the labor of immigrant workers, our food system cannot be sustained,” Rangel-Medina said. “We need to make sure that these workers are given dignity and respect that all workers are entitled to.”