Hate is tracking in the Korean American community

“We saw 900 instances of hate across the country against Muslims, Asians and other groups in the 10 days following the election,” Brandon Lee estimates.

As Communications & Research Coordinator for Asian Americans Advancing Justice (AAAJ), a non-profit advocacy group, Lee describes one incident of hate in Buena Park, CA, in which True Light Christian Church, a Korean Presbyterian church, was vandalized with swastikas and other racist graffiti in early December.

“We had been hearing a lot of anecdotal evidence of hate against the Asian American community,” Lee says. “And we wanted to get a broader picture.”

Lee says that since the site’s launch in late January, there have been 76 reported incidents of hate incidents against Asian Americans across the country in the first hundred days of the Trump administration.

These reported accounts attest to slurs, bullying, harassment and other violence. 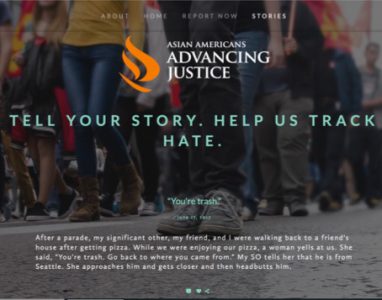 Click on the photo to read more accounts on standagainsthatred.org.

Ha says the boy was kicking a ball around on the playground when he was told by a white student that he “did not belong there.”

Ha points to this insecurity stemming from President Trump’s anti-immigrant rhetoric as one of the main motives behind the early-February merger of Korean American Community Services and the Korean American Resource and Cultural Center into Hana Center (a name which means “one” in Korean).

“Hate crimes didn’t start happening because Trump was inaugurated,” Cho says. “This is an issue that was already there.”

“We’ve had several clients being teased with this recent trend that it’s okay to be more outspoken,” Sohn says. “All of these smaller pictures of hate toward immigrants are contributing to bigger pictures of hate.”

Younglak Hong says he’s noticed an influx of racist comments recently. “I’ve been called Chink and Yellow by the people in the ER,” says Hong, a Korean American who was born in Seoul and moved to Northbrook, a Chicago suburb, when he was 11. He now works in an emergency room. “I’m not sure whether this is a direct result of the Trump presidency or whether it’s just the product of a high-stress ER environment or some combination of both, but I’ve definitely noticed it more since Trump has taken office.”

“What’s to stop him from targeting us?” Hong asks.

Kim says she worked hard in high school to show her peers that she was not “just some model minority.”

Dealing with Racism: Young Korean Americans versus Their Parents

“People ask me why I am worried about a Trump presidency,” Korean American Taewoo Kim says. “They come to me with the attitude that you’re Asian, and you’re fine because everyone likes Asians.”

But Kim says he’s worried about the racism and discrimination he’s been seeing on social media and in the community in the months after the election of Trump’s election, a worry that he says his parents don’t share.

“I’ve tried talking to them about it, but they’re kind of fine with it,” Kim says. “They expect racism and see it as something that just happens.”

Kim believes his parents’ indifference toward racism and discrimination results from their being disconnected from American media and not understanding the extent of the problem.

“Young Koreans are on Facebook and are exposed to the media and see all the racist things Trump is saying,” Kim observes. “But my parents and other older Koreans who don’t speak English really well only read Korean newspapers.” 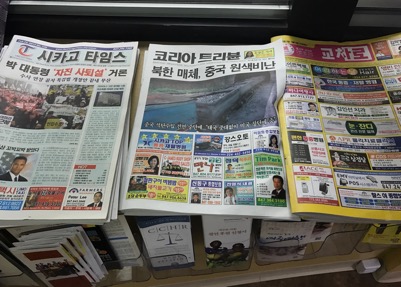 Unlike their children, most older Korean Americans read daily Korean papers, such as these,displayed at the Korean American Association of Chicago. They care more about issues in Korea than issues in the United States. [Photo credit: Matt Zdun]

Kim said Korean papers do not cover the social aspects of President Trump’s administration as extensively as American media do.

Cho says this difference in interests between the two generations of Korean Americans is not surprising.

“There is a huge cultural gap among the generations,” Cho says. Older Koreans are focused more on issues that relate to Korea, she adds.

Hong says the indifference of older Korean Americans toward issues of racism and discrimination may stem from their feelings of being foreigners in America.

“I think they still feel like foreigners to a certain extent, like they are not fully integrated into the community,” Hong says. “But, for me, this is my home now.”

Grace Shinyoung Yu, a Korean American from Daejeon, South Korea, agrees. She says her parents care a lot less about racism, discrimination and other social issues than she and her siblings do.

“On election night, I called my mom because I was really scared that Trump got elected,” recalls Yu. “But she just yelled at me for still being awake.”

“I wish my parents would care more about these issues,” Yu says.

But Yu recognizes that her parents just care about different issues than she does.

For Yu’s dad, who works as a professor in South Korea and sends money to Yu’s mother in America, the main concern is the economy.

He worries about the implications of the United States decreasing trade with its sixth largest trading partner, South Korea, and other Asian countries.

“Ever since Trump has become president, the economy in South Korea has slowed,” Yu says. “Even if my dad works really hard, he’ll be making less money because of the exchange rate.”

Yu says her parents have discussed the possibility of Yu’s mother having to move back to Korea because of economic uncertainty.

Justine Kim says her parents did not see racism and discrimination as an issue at the beginning of the presidential campaign but have come to see it as an issue after President Trump issued his executive orders during his first weeks in office.

Kim, who is familiar with AAAJ and who works with the organization, Divided Families USA, says AAAJ’s tracker is a step in the right direction toward making everyone care about issues of racism and discrimination toward Asian Americans.

“It’s a little problematic that they are lumping all Asian Americans together into this tracker,” Kim says. “But, at this point, any change is change, and we’re definitely moving forward.”

Still, some Korean Americans, like Irene Sohn, have their concerns about the validity of the so-called “American Dream” moving forward.

“With the new administration, I wonder sometimes if it will be the same just and fair land for my kids as it was for me.”