Disturbances in the Korean American field with Trump are generational

When Trump announced his candidacy for president in May 2015, he made very clear that securing America’s borders and scrutinizing immigrants would be central to his policy decisions. He stuck to those themes throughout his campaign and into his presidency, and millions of Americans, including immigrants, documented or otherwise, have protested in major cities throughout the nation in response.

So in a period of extreme fear for immigrants and minority groups, is it that Korean Americans don’t seem to care?

Trump’s policies have yet to affect the day-to-day lives of the Korean community.

“He has done nothing on tax, nothing on health care — two issues that affect Korean Americans the most in their everyday life,” Cho says.

“Most Korean Americans make a living by owning small businesses, and most of them don’t make a fortune even though they can make a decent living through their business,” Cho explains that “what impacts their earnings the most is tax. Trump has done nothing on this issue.”

Healthcare is another concern of Korean small business owners. Because most Korean Americans have small businesses, they can’t purchase employer-sponsored group plans. They could buy individual plans, but these plans are costly. Cho says most people opt out of purchasing an individual plan because of the added expense, which for a family of four can top $4,800.

“The Affordable Care Act did not make healthcare affordable for us,” says Irene Jisun Sohn, Executive Director of the Hanul Family Alliance, a Chicago-area organization that provides community services to Korean Americans.

“We are looking for reform,” she adds. “We want more affordability and more accessibility.”

Most of the action and reaction in Trump’s first hundred days so far has been about immigration.

“The overwhelming majority of the older generation of Koreans think, ‘Trump can do whatever he wants and it doesn’t apply to me because I have my citizenship,’” Cho says.

Cho moved to America with her family when she was in elementary school. They lived in predominantly-white, suburban Ohio. Though she didn’t speak English well when she got here, she learned quickly. Cho was a diligent student, with degrees in biochemistry, nutrition and psychology from Case Western Reserve University and an M.B.A. from the University of Chicago.

Cho’s academic achievements are not unique. In 2015, more than half of Korean immigrants over the age of 25 had bachelor’s degrees, according to the Migration Policy Institute. . Comparatively, just under one-third of all native-born Americans in the same age group had bachelor’s degrees.

“The Korean American community is viewed as this group that always acts appropriately, does very well academically and financially, is the most successful minority group,” Cho says with mixed feelings. “No one expects any trouble makers coming out of this group.”

More than 60 percent of Korean immigrants have some sort of legal immigration status, compared to 48 percent of the immigrant communities across the board, according to the Migration Policy Institute.

Cho says her parents are extremely sympathetic toward Mexican immigrants who are deported back to deplorable conditions if they crossed the border illegally, but they feel less understanding of Koreans being deported.

“They say, ‘If [undocumented Koreans] have to go back, they have to go back,’” Cho says. “They don’t feel bad for them because they know they’ll be okay in Korea. They don’t mind Trump’s immigration policies in that respect.”

Michelle Baik, a naturalized Korean immigrant and currently a sophomore at Northwestern University, says Asian communities may not be fearful of Trump’s policies because Trump considers Asian immigrants “well-behaving” and “not assertive.”

“It’s all about the model minority myth,” she says.

Immigration from South Korea increased sharply in the late 1960s after the Immigration Act of 1965 loosened restrictions on Asian immigration, but has been steadily declining in recent years. Between 2010 and 2015, the Korean population in 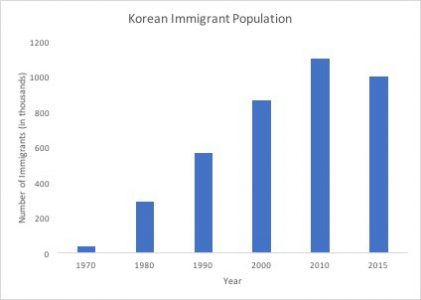 Moreover, Cho says Korean immigrants enter the country better off than other immigrant groups. Because they have fewer immediate needs, they don’t tend to strain government resources.

“Koreans have different ways of becoming undocumented,” says Nayoung Ha, a director of the Hana Center in Chicago, an organization that supports Korean immigrants. “They come in through airports and overstay their visas, so they have legal status when they enter the country.”

In the time it takes their visas to expire, they acquire jobs, housing and driver’s licenses, Ha said.

Koreans have time to establish themselves and blend in with society. They fit in and don’t raise concerns.

Younger Koreans are quite disturbed and concerned

Under President Trump’s sweeping rewrite of immigration enforcement rules, foreigners who overstay visas are now much more likely to be deported than under the Obama administration.

This is worrisome for students like Northwestern freshman HyoJung Kim from South Korea, who is here on a temporary visa.

Kim says these new visa rules make her “terrified” to stay in the U.S.

“I am not at all happy about Trump’s plans to change visa requirements,” she says. “Trump has made it even harder for me to get a visa and stay here after graduation, and I am very worried.”

Kim says she also fears racism that Trump fostered prior to taking office throughout his campaign.

Many young Koreans with American citizenship also fear Trump because of his anti-minority rhetoric.

“I don’t support [Trump] because I want to support the marginalized and the oppressed,” Baik says. “Even though I haven’t been personally hurt by him, there are other immigrants and refugees who have. I don’t support a president who oppresses groups of people.”