It’s Sunday morning, and the seats in the pews of the Adalberto United Methodist Church are filled. Elvira Arellano and her two sons, Saul and Emiliano, feel at home. They are among diverse members of the community, many of whom are immigrants. This church is their home.

Arellano is one of many Mexican immigrants in Chicago who have sought comfort in neighborhood churches. The churches provide a safe place for both legal and undocumented immigrants by supporting them and providing whatever assistance they can, including possibly a physical place to live if the immigrant has been targeted for deportation.

Arellano received a deportation order in 2002 after an immigration raid at O’Hare International Airport, where she was working with a false social security number. Instead of appearing in immigration court in 2006 when she was scheduled to, Arellano sought asylum at the Adalberto United Methodist Church. She lived there for about a year.

Immigration and Customs Enforcement (ICE) eventually arrested her in 2007 when she was in Los Angeles. She was deported, separating her from her U.S.-born son Saul, who stayed in the country for a short period of time before eventually moving back to Mexico to be with her. In 2014, however, Arellano crossed the border again, still undocumented, with her two sons to fight for immigration reform and live at the Adalberto United Methodist Church, where she has been since. 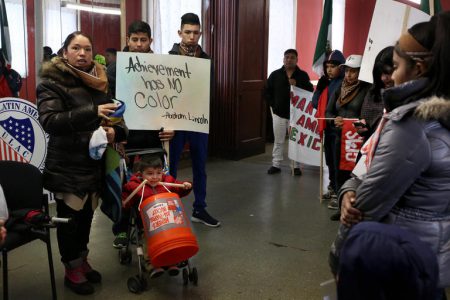 Arellano speaking in Chicago’s Pilsen community on May 1, 2016, prior to the May Day protests. [Photo credit: Nancy Stone/Chicago Tribune] Click on either photo to see the Chicago Tribune photo gallery that covers 13 years in Arellano’s life.

Arellano being introduced to reporters about her arrest at O’Hare in 2003. [Photo credit: Alex Garcia]

Since Chicago officially became a welcoming city in 2012, more and more churches have opened their doors to undocumented immigrants seeking protection. The majority of those who attend the congregation are from mixed status families, most with at least one undocumented parent, according to Emma Lozano, pastor at Adalberto and its sister church, Lincoln United Methodist Church.

The church is training teams to evaluate each family who has a check-in with ICE in case they become a victim of deportation and to prepare them with options, physical sanctuary being the last. Lozano says they are  working on a few cases of deported green card veterans who include their own member Miguel Perez Jr., who served two tours of duty in Afghanistan and returned with a brain injury and severe PTSD. He wasn’t able to get the medical attention to relieve his pain so he began self-medicating and ended up with a nonviolent drug conviction. He now faces deportation because of it.

In addition to Adalberto United Methodist Church and Lincoln United Methodist Church, other prevalent sanctuary churches in Chicago that immigrants of any status can turn to for asylum include University Church in Hyde Park and most recently, the Lincoln Park Presbyterian Church. Beth Brown, a pastor at Lincoln Park Presbyterian, says the leadership team of the church voted in January to officially become a sanctuary church. This means that they support and provide whatever assistance they can to the various organizations working most closely in the sanctuary movement and with immigrant communities where there is fear and danger of deportation.

“This church believed it was just the right thing to do because there are a lot of factors that go into why someone comes across a border and we believe that there are many people in our community who are undocumented immigrants who are well-established, who are raising families, who are significantly contributing to the community and it seems to be the result of some unjust systems and processes that make it impossible for people to finally become legal in this country despite, for many people, a long-term effort to become legal,” Brown says.

They are in the process of redoing a space in the church to be livable, in case someone needs physical sanctuary. That is most likely to happen after a person, who is well-established in the community and doesn’t want to be separated from their families, has received a final deportation order through the immigration court system.

While churches like these offer physical sanctuary, emotional support, and increased interaction with other members of the community, local organizations also offer a means of protection and empowerment by allowing all immigrants to participate and contribute to enhancing the community. One of these organizations, the Pilsen Alliance, is located in the city’s neighborhood that is most heavily populated with immigrants, in particular from Mexico. They are a non-profit community group that engages local residents to advance public education, affordable housing and healthy communities.

During President Trump’s campaign, however, they began to switch gears and become more well versed in immigrant rights issues, even though they are not immigrant rights professionals, because those issues became the immediate concerns of the community, says Pilsen Alliance’s co-director, Corina Pedraza.

“We can’t just talk about how we should improve public education without talking about the safety of undocumented families,” Pedraza says.

Since Trump’s inauguration, the Pilsen Alliance has been rapidly transforming to better suit the undocumented community by becoming better informed on the rights people have, on the work that is being done nationwide to defend the undocumented, and on what it means to be a sanctuary. According to Pedraza, the increase in community fear since Trump has also sparked an increase in the numbers of people seeking legal assistance, help with developing family and guardianship plans, and a means to learn their rights. The Pilsen Alliance has also had an increase in local residents wanting to participate and contribute to their campaigns, regardless of their legal status or origin.

Powerful messages directed toward marginalized communities are displayed in the Pilsen Alliance office.

Little Village is another Chicago neighborhood that is heavily populated with Latino immigrants. Enlace Chicago is a leading force in protection and resources for immigrant families. Enlace Chicago focuses on improving education, violence prevention, and health on the community. Much like the Pilsen Alliance, Enlace has restructured since the election to be more ready to help undocumented families with immigration issues. The organization has also seen an increase since Trump’s inauguration in the desire of local residents to participate more, so much so that they started having community meetings every other week to engage community leaders, according to Docia Buffington, Enlace Chicago’s Development Director. They host Know Your Rights workshops and train Little Village residents to give the workshops so that information is disseminated across the community.

questions and do not have to sign any documents. Participating and engaging with local organizations allows immigrants to become more informed on legal issues that they can then tell their families to protect them. When it comes to fears of ICE, residents can turn to organizations like Enlace Chicago to confirm or dispel rumors of their whereabouts.

Click on either this photo or the one above to to go to the ACLU site to download a printable version of the Know Your Rights cards, in English and other languages.

“We get text messages and all kinds of crazy alerts about ICE being here and there and so we’ve been working to have teams of people that just go to verify if something is happening or not so that we can dispel rumors because it’s generating lots and lots of fear,” Buffington says. “But in almost every case we’ve gotten to actually look that nothing is happening.”

According to Buffington, fear of deportation in Little Village has intensified since Trump’s inauguration. She has noticed that fewer people are out – so much so that a usually populated discount mall was almost deserted one weekend. Word had spread that the mall was the site of a large immigration raid in the early 2000s.

“I think the thing people need to understand about Little Village is that the community is 25 percent undocumented,” Buffington says. “The way that rounds out, it means that almost every family has a member who is undocumented.”

Mayor Rahm Emanuel and city officials have been outspoken in proclaiming Chicago’s principles as a welcoming city. As under the ordinance, any resident in the city of Chicago can have access to city services regardless of their status. The Office of New Americans works under the mayor’s office and focuses on policies and practices as they relate to the immigrant and refugee community in Chicago. As a direct response to the changing administration, the Office has put into place a legal protection fund, a 12-month initiative that provides legal resources to immigrants of any status, according to Seemi Choudry, the director of the Office. The program works with the National Immigrant Justice Center to expand the capacity of immigration lawyers through pro-bono trainings. It also works with the Resurrection Project, which is based out of Pilsen, and works to expand the community outreach of different immigrant organizations across Chicago by way of community navigators, who are the bridge builders between lawyers and the members of the community who are looking for direct access to lawyers. Through this community outreach, members in different immigrant communities know that there are experienced immigration lawyers they can have access to free of cost.

“We had been looking at this program as we were entering into this new political climate, and we were thinking about the uncertainties that are very prevalent among our immigrant and refugee population and so with that consideration, there was a very serious concern and a very serious need that was expressed by our federal stakeholders of expanding the accessibility to immigration lawyers and to be able to get the right kind of defense depending on what type of relief you qualify for and what kind of documentation status that you hold,” Choudry says.

The Office has allocated city funds toward the legal protection fund in order to expand the capacity of both immigration lawyers and community outreach so that members of the community and the undocumented population has access to the right legal defense. In addition, there have been know your rights trainings across the city, as far north as bordering Evanston and as far south as the border of Indiana, over the course of the last two months since the legal protection fund was put in place. According to Chowdry, the trainings have been very well-attended because it gives immigrants a better understanding of what protective measures are in place depending on everybody’s individual circumstances, and which rights they can benefit from in times of need or uncertainty.

Within the first 100 days of Trump’s presidency, the Mexican immigrant community in Chicago has not only increased its membership and participation in local organizations and workshops tailored toward them, but the organizations themselves have also adapted to be able to better serve the undocumented immigrant community. Changes include Know Your Rights workshops, accessibility to immigration lawyers, and more community-driven meetings and outreach.