The Desi community in the U.S. is being challenged in ways it is not accustomed to. Often regarded as among the “model minorities” who succeed, are well educated, fit in, and therefore are overlooked and become complacent, the murder of Srinivas Kuchibhotla in a bar outside Kansas City shook up the Indian and East Asian immigrant communities.

Kuchibhotla and another Indian immigrant engineer who both worked in information technology were in the bar, watching a basketball game when a white Navy veteran mistook them for Iranians, yelled “get out of my country” and racial slurs at them, and opened fire. Kuchibhotla died, his friend is recovering, and the Navy veteran is facing murder and federal hate crime charges.

The incident took place on Feb. 22, one month after Donald Trump was inaugurated as President.

Kuchibhotla had moved to the U.S. in 2005  to pursue a master’s degree from the University of Texas at El Paso. Both he and his wife, Sunayana Dumala, had visas to be in the U.S. His H1B visa allowed him to work. Her companion H4 visa does not. Both visa policies are being re-evaluated by the Trump administration.

Sunayana Dumala speaking to reporters after her husband’s death in February.

As Dumala was making arrangements to return to India for her husband’s burial, she sought out legal help to provide advice on whether she’d be allowed to re-enter the U.S. Her dilemma is just one of many that never dawned on a model minority community.

Their opposition to the Trump administration’s pronouncements and policies is not as simple as painting a sign and showing up to a rally. For many, it means breaking a culture of silence and fear in regard to political action.

Indian immigrants, along with other South Asian or Desi communities, have long positioned themselves along the sidelines of political action.

“Most Asian American advocacy groups are able to mobilize around communities because, for most of these immigrant groups, the migration is patterned,” says Shweta Singh, a professor of social work at Loyola University Chicago who specializes in India Studies and Global Feminism.

“[South Asians] don’t have this identity as a group.” Singh says.

As a model minority, many have adapted to a complacent mindset coupled with a resistance to direct action in favor of maintaining the acceptance and approval of dominant American society.

“My parents, for a long time, were like ‘you know that’s just how it is,’” saiys V Chaudhry “and it was easier to turn a blind eye to stuff that was happening because it didn’t really concern them even though they are South Asian Americans that get read in very particular ways.”

Chaudhry is a PhD. student and an organizer with CDYR, or Chicago Desi Youth Rising, a collective that calls on South Asian youth to be politically and socially active in the Chicago area. CDYR attempts to counteract notions that Desi people have no political interests or can be counted on to go with whatever direction the country may be taking without question.

“My dad was always, like, ‘don’t become a professional activist,’” Chaudhry says, “because for him that meant not being financially supported and not being taken seriously to actually make change happen.”

This attitude does not come from a place of ignorance or lack of concern for others, but instead it may stem from a sense of self preservation. When being apolitical saves a person from danger or social ostracism, they will continue to be apolitical until they have no other choice.

The Trump administration has made the choice for many people. The dial has turned from a quiet sense of safety to an angry sense of injustice. For them, it is disconcerting to sit by and pray that they not be next. In this era, is there the luxury of apolitical stance? Everything has been politicized, and everything is a matter of debate.

South Asians, however, are not apolitical, and they are not necessarily apathetic, contends Vi Ray-Mazumder, a manager of youth organizing for Asian Americans Advancing Justice Chicago. Just because people do not come to marches or create radical uproar does not mean they are not resisting, Ray-Mazumder says.

“Since the election, there’s been a few different spaces that have been created out of people that have already been organizing together in other places, 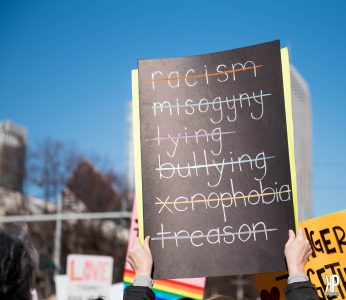 Placard at one of the rallies n Chicago.

and these spaces have been focusing like ‘what is our response to this moment?’” Ray-Mazumder says. “And one of the things that came out of this group was ‘what are the ways our communities have already been resisting even if they don’t look like what we’re doing right now? How have our elders been resisting?”

Actions like running independent businesses and supporting emergency funds between friends may not seem like activism, but they are ways in which people work outside of financial and power structures that were not built for them.

”It’s the smaller ways that our parents and elders are like, ‘yeah we didn’t really have these other systems, so we created these systems for ourselves,’” Ray-Mazumder explains.

Young Desis have been standing up and fighting back in new ways their parents never learned to, but their parents are not far behind them.

“My mom actually asked me if I was planning on going to the women’s march, and she was like, ‘I think I’m going to go to the one in Madison today.’ That’s a huge step,” says Sumaia Masoom, 20, a junior at Northwestern University who identifies as Bangladeshi, Desi, and South Asian. “I think the election was a huge wake up call for them because they realized ‘we’re not safe, if we don’t say anything, that doesn’t make us any safer than if we did say something.”

Some of the difficulty in organizing is the conflict within the community itself. Histories of anti-black racism and Islamophobia within the South Asian community presents particular challenges and problems that divide Desis and contribute to political silence.

“In the past few years there’s been so much really good organizing around police brutality and Black Lives Matter, and there’s been a lot of work by South Asian activists to think about Asian complicity in anti-blackness and what it means for South Asians to show up for Black Lives Matter protests,” says Mitali Thakor, 29, a political organizer and post-doctoral fellow in the Sexualities Project at Northwestern University.

There is also a narrative that all brown people are targets because they are perceived as Muslim, and South Asian people cannot be complacent anymore because racists will attack or target anyone who may be Muslim. However, this is actually counterproductive, Ray-Mazumder argues.

“I think that can actually perpetuate Islamophobia within our own communities because we’re not actually talking about the root of this hate,” he says “That if this person were Muslim, it would have been okay, and that’s not true.”

“I think people are also afraid that if you turn the critique in on yourself, you are fundamentally invalidating your argument externally, but it doesn’t have to be that way If you love something enough you should be able to criticize it.” Masoom says. Forming relationships, educating peers, and genuinely discussing the issues that matter are the most effective ways to combat apathy and ignorance within the community, she suggests.

Generational divides, model status, and internal conflicts have created a perfect storm for a stereotypically apolitical South Asian population. However, the election of Donald Trump and the backlash against immigrants and Muslims in America are my serve to unite Desis across geographic and age lines to speak up and fight back for their identity, safety, education, and residency status.