Sikh in America: Visibility, violence, and virtue in the era of Trump

On Devon Avenue, tucked in between an electronics store and a carpet shop is the Gurdwara Sahib of Chicago. Walking down the street, it would be easy to pass right by its unassuming façade without distinguishing it from the ubiquitous Indian stores and

On Sundays, however, the gurdwara – the name for a Sikh temple – is packed with Sikhs young and old, worshipping during services and chatting over langar, a meal served for free to all members of the community.

Sikhs have been frequent targets of violence in the U.S. The first revenge killing after the Sept. 11, 2001 attack at the World Trade Center was of a Sikh at the gas station he managed in Arizona by a man who said he wanted to kill “towel heads.”

This year, on March 3, a Sikh man wearing a turban was shot outside his home in Kent, Washington. The victim, a U.S. citizen, was reportedly told by the shooter to “go back to your country” before he shot him in the arm.

The FBI is investigating the shooting in Kent as a hate crime, one of many across the country since President Trump launched his campaign in 2015. In New York, the police department has reported a 115 percent increase in bias crimes since the presidential election last fall.

Simran Jeet Singh, senior religion fellow at the Sikh Coalition, senses that hate incidents have surged recently, based in part on an uptick in the number of xenophobic threats he personally receives online.

“What that tells us is these feelings were latent,” Singh says. “They’ve been sanctioned by Mr. Trump and his administration, and I think that is the impetus for what we’re seeing around here.”

Chicago has an Indian population of about 114,000, with more residing in the suburbs. Approximately 5 percent are Sikh, generally originating from the Punjab region of northern India, Though not a large population by any means, it is a vibrant one.

Sikhs have existed in the U.S. for more than 150 years; still 60 percent of Americans admit to knowing little to nothing about Sikh Americans, and nearly a third have never seen or interacted with a Sikh person at all, according to a 2015 study.

“I think that’s actually something that’s very unique in the American context,” Singh says. “The general population has never heard about the Sikh religion at all, let alone being able to identify who a Sikh is despite our unique physical identity.” 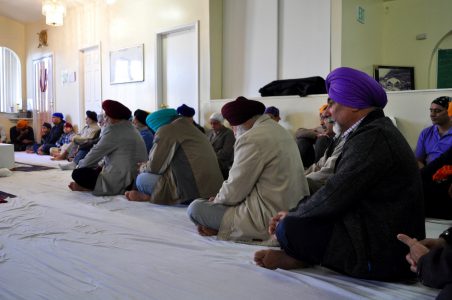 Followers of Sikhi do not cut their hair, and men wear turbans. This physical marker often associated with Islam, often leads to misclassification.

“It’s kind of absurd how even extremely educated people [mistake Sikhs for Muslim],” Asha Sawhney, a Sikh student at Northwestern University, says. “Even people who aren’t doing it because they hate us still do it. It’s not always like, ‘I think you’re Muslim and now I hate you.’ It’s also like, ‘Oh Asha, we’re friends and I thought you were Muslim this whole time.’”

When Sikhs are covered in the news, it is often for violence committed against them. And, frequently, they are discussed as the mistaken target of Islamaphobia.

Since September 11, 2001, Islamophobia has driven a lot of discourse on fear of the “other” in the U.S. The FBI’s data indicates that the number of hate crimes against Muslims increased 67 percent in 2015.

From Trump’s first proposed immigration ban on Muslims on the campaign trail in late 2015 to his executive orders barring entry into the U.S. by people from six Muslim-majority countries, there is little question that Islamophobia is a force in the United States.

Many, including Singh, see Islamophobia as a symptom, with general xenophobia and anti-immigrant sentiment as the root cause of the prejudice and violence on display in the U.S.

“If you think about the attack in Washington, it’s being framed as an anti-Muslim attack,” Singh said. “[But] the only evidence we have is anti-immigrant. Most journalists don’t actually touch on that aspect. Every time there’s a story on anti-Sikh violence, it’s framed as anti-Muslim, and it’s just not true.”

For this reason, Singh pushes back against the narrative that Sikhs are targeted because they are mistaken for Muslim. Instead, he proposes the framework of racialized identity; that is, ascribing a pre-determined identity (in this case, that of a terrorist) to those who fit a certain profile dictated by Muslim religious markers. This casts a net over many Middle Eastern and South Asian people who are not necessarily Muslim.

Singh has felt the prejudice associated with this racialized profile first-hand.

“I live in New York City, generally a more liberal, progressive place, but even there I find a stark difference in how people look at me when I’m walking around with a baby versus on my own,” Dr. Singh says. “I really think it has to do with this perception of brown skin and a turban as a threat, as opposed to someone with a baby who is [seen as] just a normal human.”

One of the core tenets of Sikhi is seva, or selfless service. Examples abound of Sikhs giving selflessly in times of need or injustice. In early February, when the Oroville Dam in northern California threatened to breach and tens of thousands of people were evacuated from their homes, Sikh temples around the region opened their doors to evacuees, providing meals and a place to sleep for hundreds.

“What you see around world for Sikhs, when there is injustice, our DNA, our coding, is we just get involved and try and address those injustices however we can,” Singh says. “That’s been true historically for us and it’s true across the world right now.

For Sawhney, activism and advocacy is “quite literally” what Sikhi is about. And she believes any Sikh activist would feel the same.

“It’s really nice to have a religion that you don’t have to twist or interpret or play games with to fit into your activism,” Sawhney says. 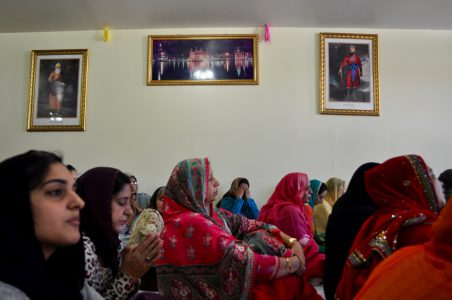 Though America does not always welcome Sikhs with open arms, Sikhs keep their hearts and doors open. For Komal Singh, president of the gurdwara on Devon, this is the only way to change minds. But, he says, “it just takes time.”