Prianka Murthy sits in a small room at an undisclosed location of Northwestern University’s campus next to a phone with another student for three hours each week. As a peer listener for NU Listens, Northwestern’s student-run listening line, she answers anonymous calls from Northwestern students with a range of issues from anxiety to roommate drama.

“I became really interested in mental health because of my own struggle with mental health issues throughout middle school and high school, particularly because of the stigmatization of mental health that I faced,” Murthy says. She is a first-generation Indian-American—her parents both emigrated from India—and a psychology major. “Mental health is not a topic that is discussed within my cultural community,” Murthy adds. “Depression and other mental disorders are viewed as a sign of weakness.”

Murthy has thrown herself into extra-curriculars and coursework dealing specifically with psychopathology because of the “way that our society is so unequipped to handle [it].” In the Indian immigrant community in particular, she appreciates the dilemmas.

“When mental disorders are mentioned, there is a lot of focus on the physical symptoms. I think that many people within the Desi community don’t understand mental illness because of the lack of a ‘cure,'” she says. “Depression and other mental disorders are viewed as a sign of weakness, and are generally hushed up as best as possible.” 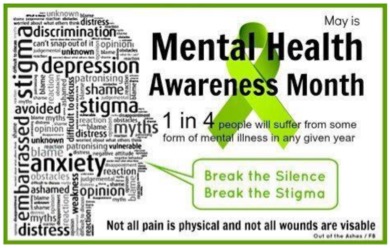 A culture that hides mental health issues can lead to terrifying consequences. Young South Asian women have higher rates of suicide than the general U.S. population.  Family conflict, anxiety and stress are precursors to depression and suicide in this community, according to a study released by Asian and Pacific Islander American Health Forum (APIAHF).

Among the unique antecedents for mental health problems within the Desi community is a family structure that not only prioritizes secrecy, but has a relatively high frequency of domestic violence. More than 40 percent of participants in an APIAHF study in Greater Boston reported that they had been physically and/or sexually abused in some way by their male partners in their lifetime. There was no significant difference when comparing arranged marriages or non-arranged marriages, Rather the stigma of harming the family structure leads to women not getting help.

Apna Ghar, a nonprofit organization in Chicago, works to help Desi immigrant women who suffer from relationship violence. Like NU Listens, it hosts a crisis line—however, theirs is staffed 24 hours. The mission of Apna Ghar, says Radhika Sharma, its manager of education and outreach, is “to address the multiple needs of immigrant refugee women who are affected by gender based violence” in any way possible. The nonprofit works with mostly first-generation Desi women to destigmatize the shame of getting help for family issues.

“It is seen as a betrayal of family secrets when they discuss family with outsiders [like a therapist],” Sharma says.

“More recent immigrants are not aware of the mental health resources and supports. There’s some resistance to getting that support,” she says. “Although there is a large number of South Asian psychiatrists, it is still not a service that many South Asians seek out.”

Sharma adds that an important piece in the trauma puzzle for Desi immigrants is a feeling of blame.

“The clients we work with are coming out from different forms of gender-based trauma … we work to let them know that this is not their fault, not something they deserve.”

Apna Ghar works to find jobs that Indian American immigrant women may have been discouraged from holding while in an abusive relationship, and to instill confidence that the women can become citizens in their own right.

“At times, their path to citizenship was tampered by their abuser—for example their abuser didn’t allow them access to their green card,” Sharma explains. “We work to help them get back on the road to citizenship.”

However, due to the Trump presidency, more undocumented women have been suffering in silence. The prevailing feelings of fear and anxiety around stepping out into the world and getting help during the Trump presidency have harmed the ability of abused women to reach out.

“I’ve been hearing from businesses and service providers that people are afraid to go out,” Sharma says. “They are aware they don’t have the correct documentation, and they know that they are vulnerable to deportation, so there’s been a decrease in people seeking service.”

The second generation of Desi-Americans, statistically more likely to seek out help due to the 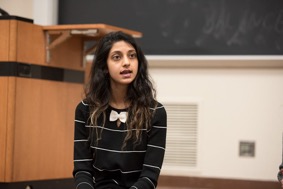 acculturation to American medicine, has started to emerge at the forefront of discussions around mental health on college campuses. Nehaarika Mulukutla, a Northwestern junior from Dallas, ran unopposed for student government (ASG) president and used the campaign opportunity to speak out on fighting stigma around mental health—something she has fought for within her own Indian immigrant family.

“South Asian culture has a tendency to erase issues of mental health or use religion and spirituality as the ultimate and only solution,” Mulukutla says. “My very traditional grandparents on my mother’s side, for example, do not really understand the mental health issues various members of my family and myself have gone through.”

Mulukutla, as ASG president, has pledged to support NU Listens, the group that Prianka Murthy works for, and to create a structure in which students can get help for the mental health issues they deal with on a day-to-day basis. She hopes to get NU Listens funded and help it become more visible on Northwestern’s campus.