A night for the masa queen to let loose

Amid the dim lights, dark wood, and cans of Schlitz of a Chicago dive bar, we drop our bags and pick a stool.

After a day’s work on our feet, we’re too tired to stand but too awake to go home.

We’re hungry — only food on the fly for those who serve dinner to others — but we’d rather have a beer than a bite.

We’re not really friends. We’re co-workers. Servers. Bartenders. Cooks. Industry folk, as they say. But when you see the see the same people five days a week, polishing glasses and silverware before service and clearing tables, it’s almost weird not to evolve into de facto friends.

Tucked amid residential buildings, The Inner Town Pub is one of Wicker Park’s still-standing dives, replete with a relic 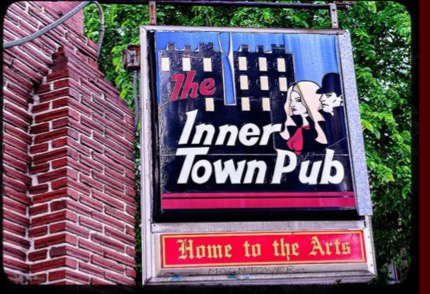 sign hanging above the single door entrance. “Home to the Arts,” it says. Meet me at Thomas and Winchester! Or rather, meet me near the busy intersection of Division and Damen, home to modern sports bars and haute barber shops. Inner Town opened in 1983, a decade before the neighborhood attracted bohemians away from Lincoln Park.

We’re part of that change. Sort of.

Five of us are sitting around a small table built into a matching wood wall. Cristina is the only Latina. We usually partake in the after-hours industry tradition of getting a little bit too drunk on Sundays. Christina doesn’t. Unlike 9-to-5ers, we don’t work Mondays. We let loose after a busy weekend serving the people who get drunk on Fridays and Saturdays. At Inner Town, we commiserate with our brethren behind the bar, keeping them busy until 2 a.m. and over-tipping because we, like them, live off tips.

It’s usually just we white girls, but tonight Cristina asked to come with us.

Cristina is quiet, polite and assiduous. She is always in the restaurant when I arrive in the afternoon, and she is often scrubbing her station clean when I leave. She always says hello and how are you. She smiles when we cross paths and she seems jarred when I say thank you, like that doesn’t normally happen.

Diners don’t interact with those cooking their food. Servers make their living interacting with diners, where conversations sometimes turn to other ways of making that living. “So, what do you really want to do?” is the most common question. I respond with a guess, “I studied photojournalism, but I’d like to be a writer.” The banter always irks me. It insinuates that my job as a server or bartender, along with everyone else’s job in the restaurant, is not worthy. There is more in the world for people like me.

If they met Christina, would they ask her that?

We work in a modern taqueria, which means fancy tacos dolled up with accoutrements like pickled red onions, masa crisps and spiced nuts; fresh lime margaritas, one caliente and one cucumber; anejo tequila old-fashioneds and overpriced Tecate.

After lunch service, the kitchen prepares a 3 p.m. dinner, what the industry calls “staff meal.” These days, restaurants touting a “we’re all family” work environment offer its employees a meal a day. Sometimes, staff meal gives the sous chef a chance to show off his skills or a line cook a hand at being more creative than the tortilla station allows. But most days, at this particular restaurant, it’s food easily conjured en masse.

Manuel, who has worked with the chef for years, often makes staff meal. He makes the meanest avocado crema this world has ever known. He scoops a spoonful onto rice, next to a simple romaine and tomato salad and, of course, chicken wings. In Ecuador, where he was born, the plate’s separate parts meld together throughout the meal. The avocado crema goes with just about everything.

Unlike more auténtico taquerias in a town brimming with them (nearly one-third of Chicago’s population are Hispanic, with over 750,000 Mexicans), our staff is only half-Hispanic. Like many trendy restaurants, my Hispanic colleagues predominantly work in the kitchen. Here at our modern taqueria, they prep each element of those multi-ingredient tacos per instructions from a gringo chef who is generous with his talents and speaks decent Spanish. Chef has spent most of his career cooking Latin food, cutting his chops at Carnivale in the West Loop before the West Loop busted at the seams with restaurants and rising rents.

Cristina works for him. He is gentle and patient, atypical in a chef.

This being a taqueria, tortillas consume immeasurable time and attention. That’s where Cristina shines. She makes fresh masa at the start of each shift, mixing water with ground corn delivered to the restaurant daily from Little Village, Chicago’s mecca of Latin manufacturing. The tortilla is the essence of irresistible simplicity. The masa sits on the stainless steel countertops until the first taco order chatters through the kitchen ticker. Cristina tugs a golf-ball sized portion of masa from its oversized bowl, rolls it between her hands and in one swift motion plops it onto the old wooden tortilla press. Parchment paper keeps the delicate masa from sticking. She pulls the lever over, presses down, briefly leans up onto her toes, lifts the lever back and releases the single tortilla. Onto the hot flat top, smattered with butter and the scent of hundreds of tortillas past, the tortilla evokes the shared experiences of ancient cultures. Christina is our masa queen.

Three tacos per order, hundreds of tacos per night. Cristina runs the tortilla station nearly every night of every week, save for Mondays when the restaurant is closed.

She doesn’t usually come out with us. She has a daughter, 8 years old, smart, vivacious, and athletic enough to coolly juggle a soccer ball inside the restaurant at our holiday party. Christina also has a boyfriend, a partner, the father.

This one night, Christina wants to let loose.

I learn that long before she arrives for the dinner shift at the taqueria, she wakes up at 5 a.m., sends her daughter off to school, and works the lunch shift at a Subway in Lincoln Square. Her routine doesn’t change. Two jobs. For us, she always makes tortillas. She never complains.

Sitting next to her at the bar, relaxing over a cold beer, I have a chance to ask her what diners ask me, “So, what do you really want to do?” But I don’t. I realize, though, that her English is far better than I thought. Turns out she is just quiet.

She is Mexican-American. She is American.