The restaurant in Montclair, New Jersey is bustling. Eyes from across the room lock on our mismatched family as we continue to eat. The 4-year-old twins noisily eat food from the kids’ menu. My older sister is at the table as are my two mothers. Strangers’ stares are met with a bullish glare, worn by my bolder mother.

Only a year before, the twins waited, malnourished, in line at an orphanage in Calcutta, India, to collect snacks.

The twins were shuttled from one orphanage to a second one, as the first one shut down. They were adopted when they were three. My older sister and I were adopted as 18-month-olds. We were in an orphanage as well but in New Delhi – India’s capital. Only two years separates all four children.

Both of my mothers made the journey to India to bring my oldest sister home. During that time, my sister’s orphanage had licensing issues which delayed the process of my her adoption. My parents spent two weeks in India and left the country empty-handed. Years later, they described leaving my older sister in the orphanage as heartbreaking. One of my mothers returned three months later but this time she returned with my sister.

As we grew up, I noticed differences between how strangers responded to me and how they treated the twins. They are darker than I am. Sometimes they received preferential treatment because of it. More often than not, they didn’t. 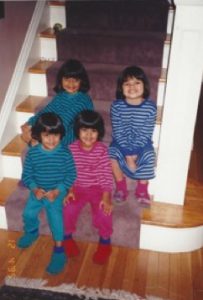 The four of us at home.

There was the time when a boy in middle school, who lived in a trailer with his young mother, repeatedly shouted “chocolate bar!” at the twins and then followed up by saying, “Go back to India where you came from!”

In the local candy store, the owner would often follow the twins around as they scooped out Sour Patch Kids from an opaque jar. As the lighter-skinned one, I walked free and unencumbered. The twins stopped shopping at the store after too many incidents of being followed around. 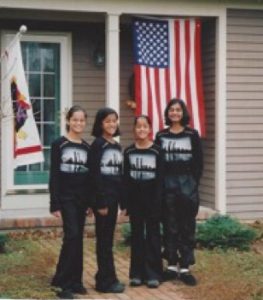 Showing solidarity for those who lost their lives or loved ones during 9/11.

9/11.  My school decided not to show the images of the twin towers falling to students below the sixth grade. I was in the fifth grade and the twins were in the fourth grade, so during the day we knew nothing of what had happened. Only my older sister knew. It was just another ordinary day in my life until the final bell rang. Both our parents came to pick up my sisters and me after school. This was not normal. We would usually take the bus, ride our bikes home or one of our mothers would pick us up.

Only years later did I realize they feared for our safety that day, as the country quickly turned on those who looked different.

There are a lot of assumptions that are tied to being immigrants or to looking different. Some that are thrust on us are not done by white people, but by people who look like us. I look more racially ambiguous. The twins look more traditionally Indian. They bear the brunt of the assumptions. Men who look Indian stare open-faced and unashamedly at the twins and older women in saris assume they have grown up in India.

There are bodies of research that have studied the differences skin color engenders from one society to another, among African Americans, and with immigrants, and how discrimination from the outside can be divisive within.

To our family, it hasn’t mattered. We came together thanks to the persistence of two people, and we’ve stayed together to fend off stares and fears.