She orders the only item on the menu she can eat—oatmeal, with orange juice. I have an egg white omelet and coffee. We sit across from each other in an IHOP booth, before the afternoon showing of Moana. We are in the middle of Antioch, Tennessee. Both strangers in a southern land.

I ask her if fasting is hard.

“I do anything for my Jesus,” she says.

Her family is fasting for 45 days—no animal products are to pass their lips during the Holy Great Fast, the time leading up to Easter from Feb. 20 to April 7.

She is part of the growing community of Coptic Christian Egyptians in the Metropolitan Nashville Public Schools. The fasting is routine, something the lunch ladies at school have to work around, offering vegetarian and vegan options to accommodate religious needs.

Coptics are known for their intense devotion to their church. Students talk about spending their evenings after school at a church service, and sometimes miss school for their weekly and monthly feasts of various saints and holidays. Sundays are rigidly held for religious purpose only. 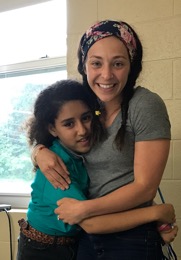 It hadn’t taken us long to build a strong bond. Margret introduced me to the concept of deep human connection almost immediately after walking into my classroom on the first day of school nearly six months ago, coming from Egypt and speaking limited English.

“What is your name?”

“Are you excited about school, Margret?”

My stomach twists in knots. Another Level 1, limited English-skilled student, to add to the already chaotic and under-resourced classroom.

Here I was, 23 years old, responsible for the education of more than  100 students. I was daunted by the job, by the seemingly insurmountable task of educating 5th grade students from over 20 countries, speaking a dozen languages. Teaching English to kids who might not even know the English alphabet, who had come from war-torn countries, ravaged by revolutions and civil wars, seemed a position I was obviously unqualified for.

The child I’m sharing an IHOP breakfast with now would be unrecognizable to me back in August. She was a shell of herself in the beginning, observing the American environment with her inquisitive brown eyes. Too much to take in, too fast. She would hold my hand or wrap her arms around me, clinging to the only being she felt comfortable with in this foreign and vastly different space.

Now, I often watch her walk down the hallway singing to herself in Arabic. Her wild hair falling out of its braid, her little girl giggles echoing off the lockers. She is stubborn, and believes she can do everything herself. Her personality is fiery, and her laugh is contagious. She reminds me of myself.

I find myself guiltily playing favorites and giving her more room to push the boundaries. Margret has found a pocket in my heart and has nestled into it comfortably.

At the conclusion of our school days, I come back from dropping off students at the bus stop during dismissal and often find scribbled notes on my desk.

Margret makes me feel that no matter how many mistakes I make in the classroom, hell, in life as a human, I am still lovable.

Sometimes I’m overwhelmed with the greater philosophical elements to American public schools, knowing how little I am capable of in such a broken system. I think of Margret and want to sacrifice all I can so she has a chance in a country whose people are addicted to their fear of the “other.”

Our stomachs are full from breakfast, but we still order butter-free popcorn, candy and a blue slushie once we’ve made our way to the movie. Having never been to a theater before, she is entranced with the visual stimuli coming from such a large screen.

I don’t think she understands half the story line, why Moana keeps capsizing her boat, or what the songs represent. But she keeps turning to me and grabbing my hand, saying thank you each time.

I am driving her back home when she inhales deeply, as if she had contemplated asking me the following question and determined now was the best time.

“Miss Wiley, why are people afraid of my family?”

She’s ten. She’s an immigrant. She’s learning English. She knows her family doesn’t have many resources. She helps takes care of her three younger brothers and sisters.

Everyday in my classroom, she forgives easily. She embraces change. She perseveres through challenges many of us will never face. She teaches me more than I could ever teach her. About love. About life. About being gentle with myself.

I try to explain, in gentle terms, what I’ve been struggling to comprehend for months now – that Americans, or people in general, tend toward fear of the unknown. I think of how pessimistic I am of the future, of the limited promises we have for tomorrow. I tell her we are living in dark times, hard times.

She experiences the challenges from a most vulnerable position, senses the struggles of her community as immigrants of color in the south, after the election.

And she says, “Yes, Miss Wiley. But after the hard times, God always gives the good times.”