TPS ends for Nicaraguans and Haitians, thousands more face uncertainty and the prospect of family separation 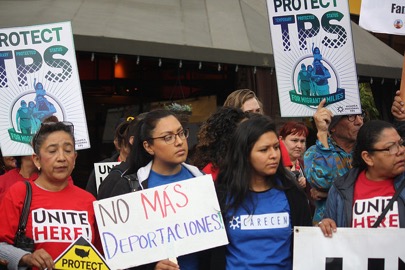 Edwin Murillo’s home isn’t the same anymore. The joy filled by his two daughters has been replaced by uncertainty and instability in the past few weeks.

Murillo is from El Salvador and has been a TPS recipient since 1999, which means he is protected by the Temporary Protection Status program established more than two decades ago.

TPS has allowed thousands of people from El Salvador, Haiti, Honduras, Nepal, Yemen, Somalia, among others, to live and work in the United States legally and prevent them from being deported to their countries where a natural disaster, an armed conflict or other temporary unstable conditions keep the country unsafe for return.

“We have two daughters who are U.S. citizens. One is 10 years old and the other one is 4 years old. The older one wants to be a gymnast and the little one is too young to know what she wants to be.”

Acting Secretary of Homeland Security Elaine Duke said in a press release that “substantial but temporary conditions caused in Nicaragua by Hurricane Mitch no longer exist.”

Two weeks after the Nicaraguan announcement, Homeland Security also announced it was ending TPS for the 50,000 Haitians who had immigrated to the U.S. after Haiti’s 2010 earthquake.

“We’ve seen what’s been going on in Puerto Rico with substantial support from the U.S. and it’s still not enough to help that part of the U.S. to recover from the hurricanes of earlier this year,” said Christopher Boyer, professor of Latin American and Latino studies and chair of the history department at the University of Illinois, Chicago.

“If you take a country like Haiti that does not have substantial wealth to draw on and put them in the same situation, you’re really putting people in a very difficult situation. A lot of these countries are not in positions to receive these people back.”

Former TPS recipient Carline Jean, who moved from Haiti to the U.S. seven years ago and currently lives in Miami, recently became a permanent resident.

“I honestly thought it was a sick joke,” said Jean about learning that TPS was ending for Haitians. “The fact that most of us have established a home in America, stayed out of trouble by working hard, followed the rules and contributed to the economy made it hard to swallow.”

While she’s not among those who will be forced to go back home to Haiti if they don’t get legal or permanent status in the U.S. soon, she worries about the conditions her fellow Haitians will face when they return.

“Haiti is and will always be a work in progress especially,” added Jean. “Most likely, going back means not being able to find work,  [put] food on the table, getting raped and/or kidnapped. I hope they can continue TPS for all countries involved or find alternatives.”

A decision is being deferred for the nearly 60,000 TPS beneficiaries from Honduras, citing that “additional time is necessary to obtain and assess supplemental information pertaining to country conditions,” while more than 200,000 Salvadorans await a decision on their status set to expire next year.

Boyer pointed out that while it is true that there is no longer a “declared civil war” in a country like El Salvador, conditions have not gotten any better in El Salvador.

“We can make an argument that in each one of those cases, the situation for average people is probably worse now than when the designation was first offered. Because these countries are no longer in war, they are destabilized by the transnational narcotics trade and human trafficking, so the organized crime. Places like Honduras and El Salvador are making it extremely difficult for people to live normal lives.” 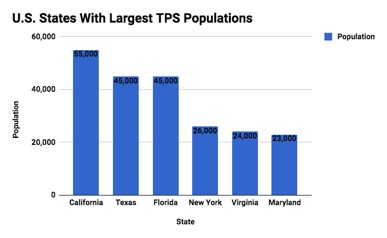 “Thanks to this program we have been able to purchase a home and travel the country without fear,” said Murillo, who emigrated to the U.S. 18 years ago and currently resides in Dallas, Texas. “Now, all I can think about are my two young daughters. I can’t tell them not to worry or tell them that El Salvador is also their home because it isn’t. They’ve never been to El Salvador.” 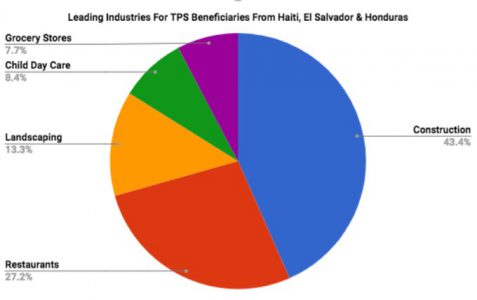 According to the Center for Migration Studies, TPS beneficiaries from Haiti, El Salvador and Honduras have an estimated 273,000 U.S.-born children who are citizens of the U.S.

“At the end of the day it’s about not separating families, a lot of TPS holders have U.S.-born children,” said Martin Pineda, digital organizer for CARECEN and the National TPS Alliance. “They’re now faced with questions like, ‘Do I leave my kids here or take them with me?’”

TPS was established in 1990, as part of the Immigration Act of 1990, as a form of humanitarian relief and was intended to lapse for people from the designated countries after the country recovered from the triggering event.

“It is true as the Donald Trump administration states, that TPS was initially intended as temporary. So, on the one hand it’s not completely incorrect when the Trump administration says that this was not intended to be a permanent response, and the countries of Latin America have to recognize that,” said Boyer.

“What happened here is that there was an unspoken understanding that TPS was the equivalent of asylum, particularly in the case of El Salvador where people were really fleeing political violence. There was an assumption that this would be an ongoing status so now to say ‘oh well this was never intended to be permanent,’ it’s changing what was the understood.”

In 2012, a campaign called Residency Now was launched by TPS holders to advocate for residency. “They had been living under the shadows for over 20 years, but the campaign didn’t really get any attention,” Pineda said. “Now the focus has shifted. We want to save TPS.” 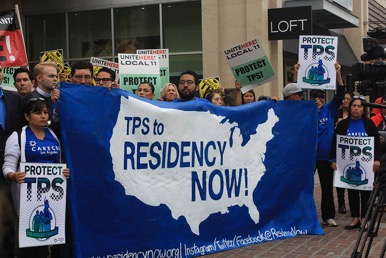 Some of the biggest concerns for TPS beneficiaries, Pineda explained, is losing their job permits and being separated from their families. “TPS has allowed them to have stable jobs and move up in the workforce. If TPS ends, they will lose their work permits and will be forced to find work whichever way they can, and it won’t be easy when they’re undocumented.”

The termination of TPS “fits within a pattern that [President Trump] established from the very beginning of his presidential ways, with which he tended to demonize immigrants and to falsely cast them as criminals,” Boyer said. “It certainly fits with his larger anti-immigrant, and I would say anti-Latino immigrant rhetoric in general.”

While Murillo tries to remain optimistic, he can’t stop asking himself one question if TPS ends for Salvadorans: “Where will we go?”

“When we came to the United States and decided to leave our native country, our intentions were only to have a better future and to progress academically,” Murillo said. “What this announcement has created in my home is chaos. It’s a terrible psychosis. We don’t understand why they want to separate us from this country when we have given so much back.”