I learn to listen through thick water across distance and difference 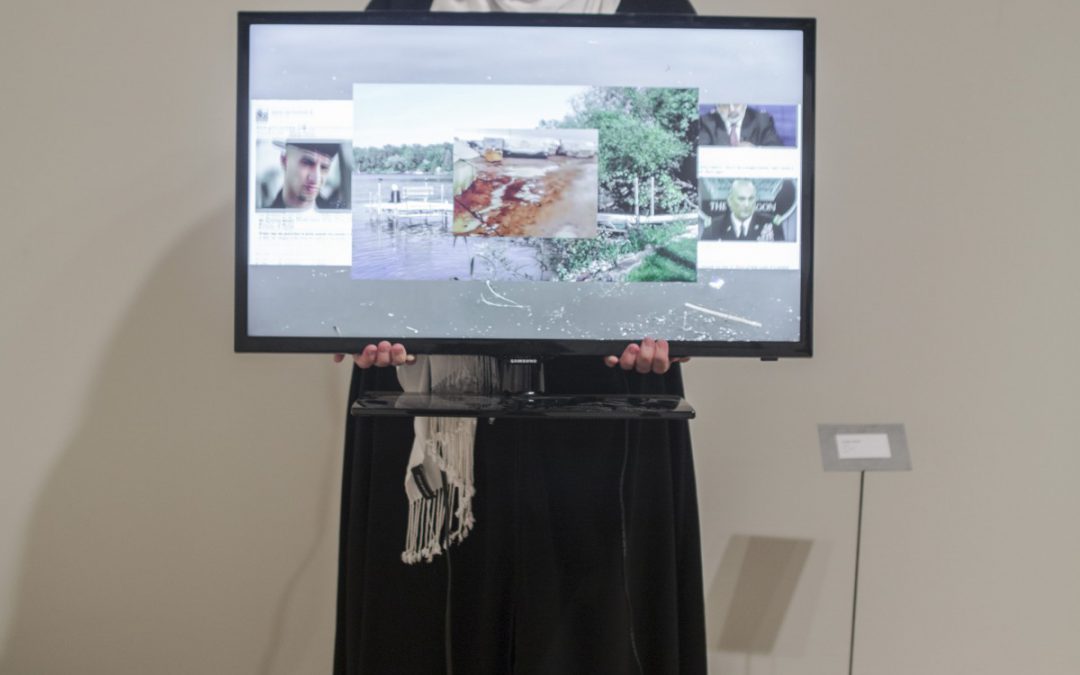 A glistening pile of salt the weight of a child spills forth onto the gallery floor, depicting the accumulated salt deposits along the shores of the Dead Sea. On top of the mound rests a small, plaid backpack with a teddy bear strapped to the front. 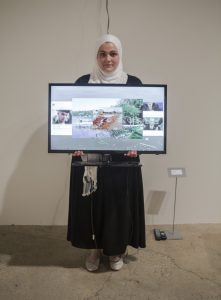 Essma Imady in the process of installing one of the art pieces in her exhibit “Thicker Than Water” at the Minneapolis Institute of Art.

The Syrian-born artist Essma Imady endows the sculpture with the title, Pillar of Salt. She seeks to capture a sliver of the myriad emotions associated with leaving her native homeland behind and looking ahead to raise her daughter in America. The sculpture alludes to the religious tale of Lot’s wife, which appears in Islamic, Jewish and Christian texts. In the story, Lot and his family flee danger with warnings from God’s messengers to never look back on their home. But upon fleeing, Lot’s wife disobeys the command. As punishment, she is transformed into a pillar of salt.

Imady immigrated to Minnesota in 2011. Her personal history as an immigrant informs, but does not limit, her artistic practice. Since leaving Syria, she has wrestled with the demands of building her artistic career, being a mother and reckoning with the violence devastating the country she called home.

Her art draws on each of these experiences, as sculptures and multimedia work explore how to explain the phenomena of war, violence and cross-cultural identity to a child, or in the artist’s case, her Syrian-American daughter Tammy. Each artwork makes visual the corresponding anxiety that emerges when occupying the identities of both immigrant and mother.

As I survey her work on an overcast day in March, Imady stands poised in the middle of the room with arms folded across her chest, surveying the empty, 70-foot-long gallery wall. Additional artworks line the baseboards of the walls, waiting to be rearranged and hoisted into place.

Over the course of the week, Imady and I haul up her materials from the museum loading dock. They include boxes of lead, borax-soaked books and prayer rugs adorned with defunct firecrackers. Using these materials, she will bring years of artistic planning to fruition in her exhibition, Thicker Than Water, at the Minneapolis Institute of Art, where I work.

Throughout the installation, I learn vignettes about her life—the challenges of raising a child while in graduate school or the guilt she carries still knowing her elders face untold violence in Syria. I listen, at times finding points of relatability or needing to process the chasm between my experiences and hers.

I walk over to an ornate, leather book that rests face open in a vitrine. Gold leaf edges line each page. The open pages contain emails from Imady’s grandmother, including one marked Aug. 18, 2015, at 4:15 p.m. with the subject: “Damascus Journal.”

Imady had bound a year’s worth of emails from her grandmother into a book. In each archived message, she describes both the quotidian routines of life–eating breakfast, attending yoga, commuting on the bus–and the close reality of war–witnessing neighborhoods being shelled or learning about political executions. The emails have a dual purpose—her grandmother sent them both to strengthen the familial connection over a vast geographic distance and to declare herself alive in a country torn by war.

I first met Imady in 2015 when I was an arts reporter. We didn’t speak the first time we met. I approached her as she held an oversized television screen that was broadcasting the devastation happening in Syria. She carried the television in her arms for an entire two-hour performance, using her gaze to implore anyone who passed to bear witness. The following year, I came across her work at the Soap Factory, a contemporary art space in Minneapolis. I took the opportunity to speak with her at greater length and spent days writing about her installation. Her story consumed me.

In her artwork, Imady provides a space to contemplate the unaccountable suffering, displacement and separation happening within Syria and among families living in the diaspora. She tells me she’s contemplating what it means to represent the place and people of a country she can no longer live in. She remains adamant that she doesn’t speak for all Syrian people.

Imady is the first Syrian artist to have a solo exhibition in the museum’s over one hundred years of history. I am humbled by the lessons — patience, introspection and constant vulnerability — she has imparted to me as a writer and storyteller along the way.

She captures the multiplicity of experiences carried by a displaced generation with nuance and care. And her approach has embedded in me an ethical praxis that I hope to carry with me as I report on the lives of immigrants and refugees.