Over our first dinner, we touch the surface, probably hold back, and want more 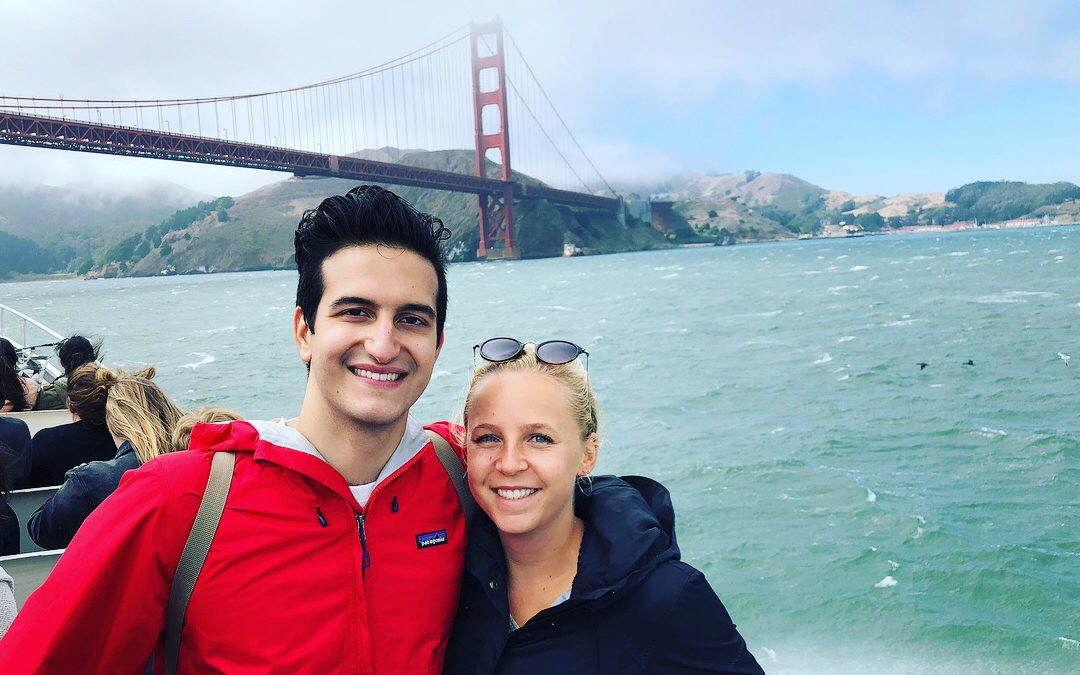 It’s a summer night in suburban Minnesota, unmistakable for its sweltering humidity and cast of whining mosquitoes. Instrumental music plays softly in the background. I watch perspiration gather and slowly drip off my wine glass, the droplets illuminated by a dusty pink sunset. There’s a lull in the conversation at the table on the deck of my family home.

“¿Todo bien?” I murmur to Cristina at my right. “Si, si gracias,” she replies. All’s good.

Tonight is a coming of sorts, as the Hackett and the Belardi families have dinner together for the first time. It’s a bit odd experiencing a manifestation of my college life in my childhood home, but it feels right. I want my parents to get to know the people who have played such a large role in the last three years of my life.

My dad asks if we’re ready for salmon. After enthusiastic responses, he scoops the fish off the grill and onto our plates. I immediately regret all of the chips and guacamole I just snarfed down.

I ask if anyone needs more water. “Alguien necesita agua?”

“No, todo bien.” We’re all good. The conversation resumes, interrupted by metallic clinking of forks on plates and exclamations of pure joy at the quality of my dad’s salmon. 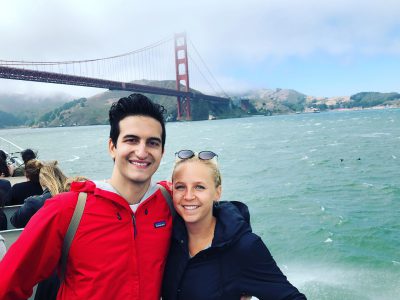 We talk about school. Carlos and I are about to enter our senior years at Northwestern University. We successfully navigate the conversation away from our impending job searches. Nelson talks about his job at Ecolab and the trip he recently won for being a top salesman. The conversation turns to their home country.

My mom and dad know that the Belardis are from a country gripped by severe economic and political turmoil. I’m hoping that Carlos’ parents tell them more about it.

Nelson says that it was a great place to live for a long time, but now, the economic crisis is so severe that stores are empty and such simple goods as flour, toilet paper, and ibuprofen appear on the black market.

Nelson and Cristina grew up in what’s often called the most dangerous capital city in the world. When they lived there, Caracas, Venezuela, looked different.

The Belardis had a two-story apartment with a spiral staircase. They employed a cachifa, a maid who cooked and cleaned for them. Carlos sometimes tells me about the beautiful beaches he visited as a child, or he tells me that although they had a good life, they could tell it wouldn’t last.

Nelson went to graduate school in 1997 at Indiana University Bloomington, living there with Cristina and newborn Carlos before returning to Venezuela in 1999. When the Belardis could sense the rumblings of economic collapse, they did everything they could to get Nelson a legal work visa. They secured one in 2003, and moved to Minnesota to start a new life. Later, the visa evolved into a green card, and then citizenship.

I know the Belardis are holding back. I wonder if my parents can sense it too. I wonder how they’d react to a conversation about the basic medicine the Belardis smuggled to Carlos’ grandfather so that he would survive a bout of pneumonia, or about the immigration status of some of their relatives now living in the U.S.

My parents murmur their awe at the Belardi’s story of migrating to the U.S., and I sigh in relief as we break to grab dessert. Over bowls of steaming apple crisp and melting vanilla ice cream, we roam to the type of small-talk expected among people who have only just met. Apple pie is Nelson’s favorite. Cristina recently started a part-time job at a healthy meal prepping company in town.

Our only light now is the soft glow of the kitchen lamp through the window. The night feels less swollen as the oppressive humidity condenses on cool glasses.

I hear the dads swerve into incomprehensible work-talk, while the moms discuss strategies for moving into the Belardis’ newly purchased home.

I had no idea it would go this well, I whisper to Carlos. I realize that until this moment, I hadn’t relaxed the entire evening.

When I met Carlos three years ago, I had no clue that we’d learn about the world and become adults together. I had no idea that the Hacketts, who are Minnesotans whose family reunions regularly take place on dairy farms, would fit so perfectly into a family that grew up in—and eventually escaped from—a beautiful, tropical disaster.

Later, after we send Carlos and his parents off, my parents and I clean up the kitchen. 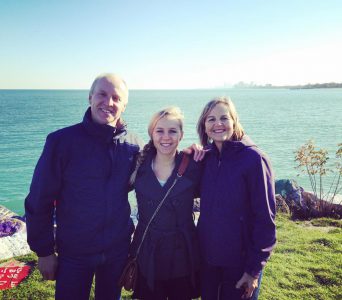 My parents and me along Lake Michigan on Northwestern’s campus.

My parents gush about how great the Belardis are and that we should have them over again soon.

I smile. Yeah, we should.