Chicago’s municipal ID program began last April. How well is it working to reduce barriers for the city’s immigrant population?

Yesenia Barrera takes time out of the English class she teaches at Universidad Popular to go over the city’s new municipal ID program.

The program is available to all Chicago residents and was initiated not quite a year ago by the Office of the City Clerk. Without the active support of Universidad Popular, teachers like Barrera, Rosa Solano and Anna Maria Rojas, and other community groups, the program might be dead in the water. 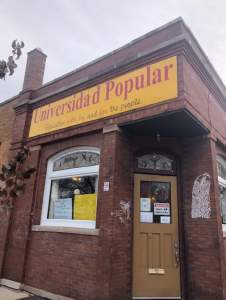 They make sure their students know what to expect from the program and have compiled the documents needed to secure an ID.

Rojas said that almost 40 adult students in her evening English class attended the printing event and described some as “jumping out of their seat with excitement” to get the ID. For immigrants like Lucia Falcon and Sugey Lopez, who do not have a valid state identification card, the new city program offered the safety and security of belonging. A longtime resident of Chicago, Lopez emphasized it was important to get the card because unlike her matricula consular identification card, issued by the Mexican government to people living outside the country, this card “says people live in Chicago” and when people ask, I can

tell them “I am from here, not Mexico.”

To apply for the new ID card, Chicago residents must either make an appointment at City Hall or attend a mobile event in the community, according to Jose Sanchez Molina, an employee in the City Clerk’s office. The events are hosted several times a month and print a limited number of IDs on a first come, first served basis. Though the recent event at Universidad Popular was advertised as running from 4-8 pm, people began lining up at the center as early as 9:00 am to ensure they were among the limited number of people who would get an ID.

The city’s partnership with community organizations is arguably the program’s most compelling selling point to immigrants. In addition to providing feedback and suggestions in the early stages of program development, community partners also help residents complete their applications and help manage the lines and pre-screening process at mobile events. Sugey Lopez recalled this additional support to be very helpful as staff helped her husband recognize he had forgotten his birth certificate.  He was given time to return to his nearby home to retrieve it to avoid losing his place in line.

The environment of trust and familiarity organizations like Universidad Popular have built with the community make it much more likely that immigrants will apply for the ID card instead of trying to navigate a trip downtown to City Hall. “People would feel less comfortable and confused without us,” said Rosa Solano. Community partners also play a significant role for undocumented immigrants, many of whom are afraid of government officials and the threat of deportation. Solano explained that for undocumented students at Universidad Popular, who were hesitant about the ID program, teachers helped them do research so they knew the program was safe and would not retain any personal information from applicants.

Many people take for granted what it means to carry a government issued identification card—probably because it’s not something they have had to think much about. Routine actions that require valid identification, such as applying for a job, opening a bank account, or renting an apartment are done with relative ease. A different reality exists, however, for people who lack an ID and the associated privileges of security that come with it—even more so in Trump’s America, a country that discriminates against and mistreats those without documentation.

According to its website, the city recognized the difficulty many of its residents face obtaining valid identification and the significant ways this limited an individual’s success. As a result, it created a task force of government officials and community groups in 2015 to develop a municipal ID program that would be available to all Chicago residents, regardless of immigration status. If effective, the program marks a significant step for Chicago in showing a willingness to support its immigrant population, particularly those who are undocumented.

Over time, the program has already evolved to include prescription benefits, discounts at local businesses, and can be used as both a library and public transportation card. The City Clerk’s Office officially rolled out the program last April and named it the Chicago CityKey Card. True to its name, the CityKey card was designed to unlock doors to new opportunities for residents throughout the city. By improving access to everyday resources out of reach for many of Chicago’s immigrant population, the CityKey card plays a significant role in reducing barriers for cardholders.

Kate LeFurgy, chief communications officer for the City Clerk, said demand for the ID card has remained high since the program began. However, due to limited resources and a “shoestring budget,” LeFurgy says it has been difficult to keep up with the high demand for the card. With only two full time city staff dedicated to the program, she estimates that by mid-November around 25,000 ID cards had been printed.

Chicago hopes to continue expanding and improving the CityKey program, a process which hopefully addresses some of the concerns highlighted by new immigrant cardholders. In addition to the limited number of IDs printed, the primary issues raised by Universidad Popular students are the restrictive list of documents accepted to apply for the card as well as the long wait times and disorganization of the pre-screening process. In response to this, Sugey Lopez suggested prioritizing immigrants who lacked other forms of valid identification to get the card first as well as people, who are a part of the community hosting the event. Participants also suggest the need for more mobile events at community organizations.

Though Lucia Falcon was happy to have her CityKey card, she also expressed disappointment in some of the limitations she has observed while using the card. Falcon discussed her frustration with some businesses refusing to acknowledge the legitimacy of the CityKey card. Falcon tried to use her CityKey card to transfer money to her family in another country and open a new bank account. In both cases, her ID card was not accepted. In response to this, a group of participants from Universidad Popular emphasized the need for greater promotion about the program throughout Chicago so that the CityKey card is more widely recognized and valued the same as state identification cards.

When Chicago immigrants do get the CityKey card, there is a positive response to the extra resources, discounts, and benefits attached to the ID. A staff member at Universidad Popular, who wished to remain anonymous, said that there is no question CityKey is psychologically a good thing for people without documentation, as it helps to “reduce mental barriers by providing self-confidence.”

From the ability to show proof of residency to walking down the street and being stopped by a police officer, “it’s all of these little interactions” that make the CityKey card significant for immigrants, says Sanchez Molina. The privilege of having valid identification on hand alone helps reduce some of the barriers that stand in the way of success for Chicago’s immigrant population to live their day-to-day life the same as other American residents.