My friend Abdi can do anything; as a Somali refugee, he’s had to 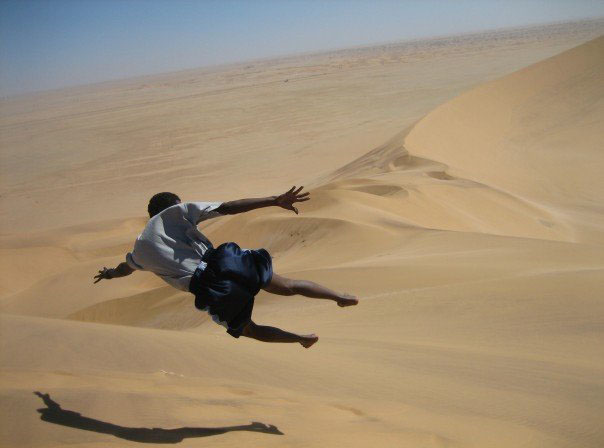 It’s hot for May, more than 90 degrees, and so windy I struggle to hold my skirt in place. Abdi* is waiting for me inside the Coldstone Creamery. We embrace under the fluorescent lights, place our orders and find a bench by the river to talk and enjoy our ice cream. It’s been more than a year since I’ve seen him.

We met as students from different Minnesota colleges studying abroad in Namibia. We were in some ways on his home turf. Abdi was born in Somalia. He lived in a refugee camp in Kenya before coming to Minnesota. Namibia and Somalia are a few thousand miles apart on opposite ends of Africa. He was excited to get to know a different part of Africa yet come closer to home than he had been since he left. 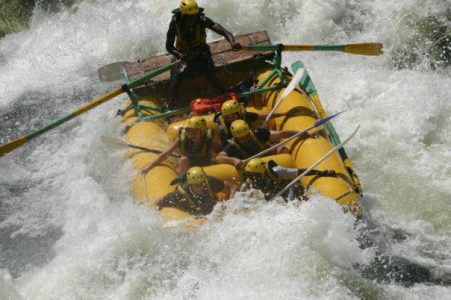 Abdi and I joined a white-water rafting trip on the Zambezi River.

Abdi was my friend who could do anything. With his wide smile, sense of mischief, persuasive nature and impressive dexterity, there was nothing that seemed to stand in his way. When we traveled to Victoria Falls for spring break, Abdi talked the bus drivers into giving him discounts. He convinced authorities at the waterfall he should get the reduced entrance rate for Zambian nationals. He could clamber up a tree like a forest creature. When sand got into someone’s camera lens, Abdi was able to coax it out and save the camera.

His antics kept us in stitches and his skills frequently came in handy. After we climbed the world’s highest sand dunes, I was exhausted, dizzy and dangerously out of water, unable to take another step as the noonday desert sun got hotter and hotter. Like a mirage, I saw a 4×4 shuttle coming toward us. Abdi flagged it down and persuaded the driver to take us the rest of the way back.

After our program ended, Abdi and I returned to Minnesota. The demands of our separate colleges meant we rarely saw each other. Then, a year after graduation, I attended a conference in Rochester, Minnesota — Abdi’s hometown. I was thrilled for the chance to see him.

So now we are reunited, eating ice cream on a bench by the river in Rochester. It’s May 2009, the early days of the Obama presidency. We are college graduates now; adults. We joke, laugh, trade stories of our classmates and catch up on our post-college lives.

Though only a few years have passed since our study abroad program, it is clear our adulthoods have diverged into very different paths. I am learning to buy groceries and pay rent. He is working two jobs to send as much money as he can back to his family in Somalia.

As he tells me about how he misses his family and shares some of his struggles working to support them, I realize I am seeing a side of my zany friend I hadn’t seen before. Abdi seems different, older, more mature. I can hear his devotion to family and see how hard he is working. I understand that Abdi could do anything because he had to. Has he changed, or do I see him more fully now?

The light of the May evening starts to fade. Abdi and I promise to stay in touch.

But years passed. We lost touch. He didn’t respond to my emails. I didn’t make it back to Rochester. As the political rhetoric about immigration, terrorism and the Somali community sharpened the last few years, I’ve wondered how my friend was doing.

It came as a surprise to Abdi when I called recently to catch up.

As before, we reminisced about the old days and swapped stories about our classmates. “Rob is a pastor?” he exclaimed. “That’s crazier than Trump becoming president!”

Our lives have changed since we sat by the river in the early days of the Obama presidency. Abdi is now married and has three young children. He said his life is a lot less exciting now, and joked that he has lost a lot of hair.

I asked Abdi what stuck in his memory of our time in Namibia. Abdi said his adventurousness was an expression of the freedom he felt there.

“In Namibia I almost had a chance to be a kid again in that environment,” he said. “It was a really unique way to experience freedom without fear of profiling, bias, prejudice just because of the color of my skin. I didn’t feel I was walking there as a black Muslim person. I was just — me.”

Arriving in the U.S. as a teenager, learning a new language and suddenly being responsible for his family’s well-being thousands of miles away, Abdi had to grow up fast.

As he worked hard to support his family in high school, Abdi was often unable to communicate with them because the cost of calling cards was so high it was better to just send them money. Even simple activities like deciding whether to go to dollar movies with his friends became choices about how to support his family.

“It wasn’t that I didn’t have a dollar, but that dollar would get in the way of me making $30 that night, and that $30 is a week of my family having food,” Abdi said. “So here I am a teen and yet I feel like I have twenty kids and two different families to support.”

In college, Abdi worked weekend shifts at a group home to earn money and attended classes during the week. His college classmates didn’t understand this side of him. “It’s easier to compartmentalize it,” he said.

As I ask the questions I should have asked years ago, I realize our Namibia program was one of the only moments of Abdi’s life when he was able to just enjoy his youth. He was able to spend time socializing with friends in a way he usually couldn’t, get ahead in coursework without even trying, and pursue the opportunities that came with his feeling of freedom on his home continent. “I was able to almost revive a different spirit about me,” Abdi said.

Today, with a family of his own in Minnesota, Abdi sees his responsibilities as “like having two mortgages.” It’s a literal word choice because the amount of money he sends back to Somalia monthly is nearly equivalent to his mortgage payment. But it also demonstrates the emotional and financial reality of having two homes.

As the political climate has changed over the last few years, Abdi has been rethinking the concept of home. When President Donald Trump came to Rochester for a rally before the midterm election, Abdi saw 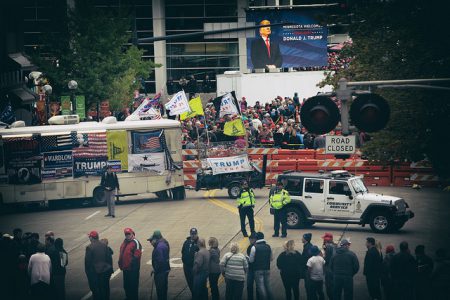 six blocks of Trump supporters lined up in his hometown.

“The hate on their faces, the energy they expressed without even saying a single word — they felt empowered to just invade what I would consider my community,” Abdi said. “For a long time I’ve thought this is my new home and I own it as much as the next guy, but then you see truly when push comes to shove you don’t belong. It makes me really question, ‘is this where I want to raise my kids?”

I hope that someday soon I will meet Abdi’s kids. Maybe we’ll eat ice cream and walk to the river. I hope they’ll have their father’s determination that nothing will stand in their way. But as his Minnesota-born children grow up, they will undoubtedly face some of the same questions about home, belonging and identity.

“I would like to think they would have Somalia,” Abdi said. “And they may be saying ‘You betcha’ in their normal conversation.

*Abdi is a pseudonym. I am not using his real name at his request in this period of xenophobic rhetoric.

Photo at top: Abdi does a flip in the Namibian sand dunes. (Photo credit: Jessica Steinbach)