There are 5,000 visas available for survivors of human trafficking each year. Why are 75 percent not being given out? 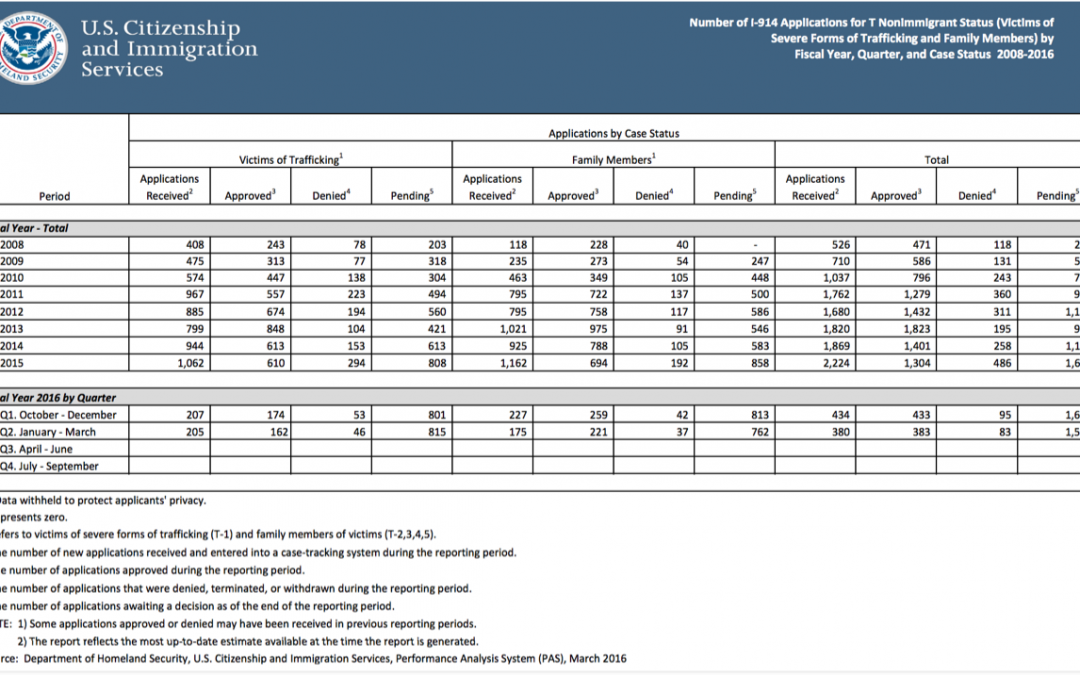 When Estela De Los Rios and an FBI agent came to Santiago Perez Navarro’s door, he didn’t realize his “employer” — a woman named Betty — was acting illegally by withholding his salary and immigration documents, threatening him with violence and deportation, and making him work 14-hour days, six days a week in her taco shop.

But he knew something was wrong.

“I was afraid,” Navarro told me in Spanish. “Because I never, never believed they were going to help me.”

De Los Rios says that story is all too common with many of the human trafficking victims she encounters as the executive director of Center for Social Advocacy (CSA) in San Diego.

Every year, 5,000 immigration visas are available to survivors of human trafficking. However, according to data by U.S. Citizenship and Immigration Services of the Department of Homeland Security, only approximately 25 percent of available T-visas are given out a year. 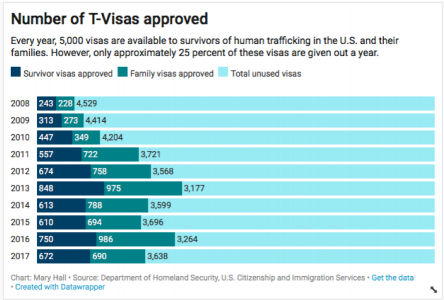 T-Visas, approved by Congress in 2000, allow survivors of human trafficking and their immediate families to remain and work temporarily in the U.S. This helps survivors access refugee benefits, like food stamps and job training, and apply for a green card, which allows them to work legally in the U.S.

Even if all 5,000 visas were used, it would be only 1 percent of the estimated number of people who are being trafficked in the U.S. each year.

Data is hard to come by

There is no official data on human trafficking in the U.S., but the Global Slavery Index, a bi-annual study published by the Walk Free Foundation, estimates that there were over 400,000 people living in conditions of modern slavery in the U.S. in 2016.

There’s also no data that breaks down whether victims of trafficking are citizens or residents of the U.S. or whether they live overseas. What is known is that victims from other countries are often funneled into labor trafficking.

They may be the people who do your nails at the salon, serve you in a restaurant, clean your house or harvest the vegetables you buy at the grocery. While some are “smuggled” here, most enter the U.S. on legal visas — up to 71 percent, according to the 2014 study Hidden in Plain Sight by the Urban Institute–Northeastern University.

“[Human trafficking] is pretty invisible,” said Katie Feifer, research director of the Voices and Faces Project and member of World Without Exploitation. “You don’t ever see the people who are picking your fruits and vegetables and plucking your chickens. You don’t see them.”

The hurdles to report are high and keep coming

That’s one of the reasons human trafficking in the U.S. is extremely underreported — and why it is that few survivors of trafficking receive visas.

Polaris Project, which runs the National Human Trafficking Hotline, received only 8,524 reports of suspected human trafficking in 2017, and there were only 783 active criminal or civil cases trafficking cases in the U.S., according to their website.

To begin with, the hurdles to even know about the visas are high.

“You are an immigrant from Mexico,” said Feifer, “you’re working, your wages are being withheld, you’re confined to a camp, you’re not being allowed to leave, they’re making you work incredible hours, how are you going to find out that this is not the way it should be?”

Santiago Perez Navarro is a survivor of labor trafficking who now works with the Center for Social Advocacy in San Diego to help others. (Photo courtesy of CSA San Diego.)

Navarro said that he came to the U.S. because he couldn’t find a job in Mexico. He was 21 years old, a father of two and didn’t have enough money for rent. After arriving in California, he was told there was a local taco shop that didn’t ask about legal status.

But that’s when Navarro, along with two other men, were forced to work long days cooking, serving and cleaning in the shop. In the evenings, Navarro would often be forced to clean houses with Betty, where, he said, she would sexually assault him. When one of the men demanded a paycheck and threatened to sue, Betty contacted police and had him deported.

“She did it so she didn’t have to give us our money,” Navarro said. “We had to do what she wanted. That’s slavery.”

Language barriers, isolation and fear all keep people “in the shadows,” said De Los Rios.  “The Department of Labor can help them to some extent, but a lot of those victims don’t understand or know that they’re being trafficked.”

“They are in a foreign country, whether they are undocumented or documented, they’re scared,” De Los Rios said, adding that many traffickers threaten deportation if victims demand wages.

“That’s how the populations that employ [these people] get away with it,” De Los Rios continued. “[Victims] just want to survive.”

The irony is tangible. It often takes brushes with advocates or law enforcement for a victim to get help, but fear keeps victims hiding from the very thing that could allow them freedom.

“[Traffickers] threaten them, they bully them,” De Los Rios said. “[Victims] are enslaved mentally, because they don’t know where to go to recuperate their pay. They would work for weeks or months and they wouldn’t get paid. Who would they complain to?

“There’s a sense of normalcy in the way they’re being treated,” she added.

It is challenging for law enforcement to identify victims of human trafficking as such, and the victims face shame and fear when coming forward to tell their stories.

“It takes time and training to be able to identify traffickers,” said Alison Kamhi, advocate and attorney with Immigration Resource Center in San Francisco, who in 2017, wrote a report on T-Visas, along with fellow attorney Rachael Prandini.

“It might be that law enforcement aren’t trained to recognize [human trafficking survivors] or that they may be given guidance to arrest the person anyway,” Kamhi said. “[Survivors] may have criminal or immigration violations just by nature of what they’ve been forced to do.”

Victims are being driven underground

Under the Trump administration’s crackdown on immigration, trafficking survivors, who are not seen as enforcement priorities perhaps have more to fear from interaction with law enforcement.

“If someone applies for a T-Visa and is denied and doesn’t have lawful immigration status, the new policy guidance says [the person] will be placed in removal proceedings,” said Kamhi, “The worry is that that will drive survivors underground even more.”

If survivors are deported, they can no longer apply for a T-Visa. Even if the trafficking happened on U.S. soil, a survivor has to be still living in the U.S. to apply.

Though the annual quota of 5,000 has never been hit, T-Visas currently take approximately 14 to 22 months to receive. “To give you a comparison, it’s taking close to 10 years for [other visas],” Kamhi said. “ 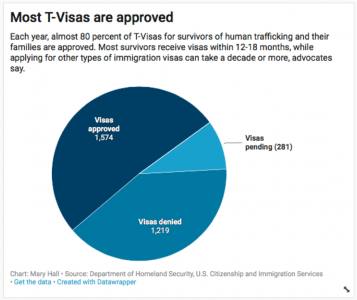 To apply, survivors may have to get a certification from law enforcement saying they cooperated with the investigation. And while a criminal conviction can cause an application to be denied, survivors can apply for a waiver.

“You still are going to have to make an argument,” Kamhi said. “You at least have that opportunity to make that argument, but you don’t have that option with many other options of immigration relief.”

The gap between the survivors who could be benefiting from T-Visas and the advocates who can help survivors apply for them is frustrating for all.

The moment Navarro received a T-Visa in 2016 — more than 15 years after he first entered the U.S. — changed his life.

“I can work legally now,” he said. “My money goes to my table. I have freedom, security. I have enough.”

[Editor’s note: The reporter has chosen to use both terms “victim” and “survivor” in this piece, in order to distinguish between people who are experiencing the crime of trafficking or the legal proceedings afterward, and those who are out of trafficking and/or have gone through the recovery process, in accordance with guidelines set forth by RAINN (Rape, Abuse & Incest National Network). When speaking of specific individuals, the reporter used the term they preferred.]