Are the Central Americans walking towards the American border—the “caravan”—migrants or refugees? What’s the difference?

Ingrid Hernandez Mejia and Misael George Bonilla, a couple from Honduras, came to the U.S. border with their three children. Gang members had killed Ingrid’s brother and were threatening their kids. They harassed their children and fired a gun at their home. They told the local police, but they failed to offer assistance. The family came to America as asylum seekers, attempting to protect themselves from gang violence.

“Imagine one day going to work, and you have this fear that when you come home your kids might have been kidnapped or killed,” Bonilla told the Washington Post, which reported the story on Nov. 1. The family left their home seeking safety they felt was unavailable in their home country.

Halfway around the world in Syria, a civil was has been raging since 2011. In that time, more than 6.5 million Syrians have fled their homes. As people continue streaming onto European shores from Syria, Somalia, Eritrea and other countries, current news coverage tends to wrap up all of these travelers under the label of the Syrian refugee crisis. Publications from TIME to New York Times to CNN write stories with “Syrian refugee” in the headline that report on people from various countries.

Mejia, Bonilla and those enveloped in the Syrian refugee crisis have something in common. They face fear of violence, persecution and, ultimately, death—traumas most often used to describe refugees.

The United Nations 1951 Convention Relating to the Status of Refugees defines a refugee as “someone who is unable or unwilling to return to their country of origin owing to a well-founded fear of being persecuted for reasons of race, religion, nationality, membership of a particular social group, or political opinion.” 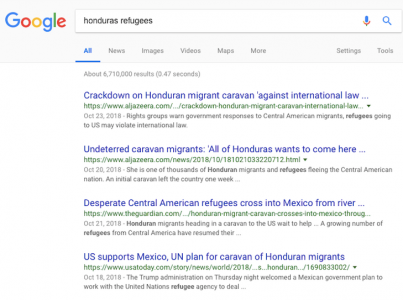 The family fleeing Honduras could be considered a group of refugees. But they—along with many others leaving Central America—are more commonly referred to as migrants, lumped into the category of a broader migrant caravan. A quick Google search shows news organizations including NBC, Vox, CNN, Huffington Post, and USAToday referring to Central Americans fleeing violence as migrants.

In the minority are Al Jazeera and The Independent, both published outside the U.S., which refer to those in the caravan as including both migrants and refugees, and BBC, Time, NPR and the Guardian, which often refer to them as refugees.

The UN uses the word refugee when referring to the group of Guatemalans, Hondurans and Salvadorans traveling towards the United States, deciding that those in the caravan fit its definition.

The UN has a different definition for migrants. They refer to migrants as a group of people traveling together for different reasons.

“A migrant is a bit broader,” said Salam Shahin, a senior reporting officer at the UN Refugee Agency. “There’s no legal definition or an agreed international definition…People can still talk about migrations without legally defining what the word means.”

Migrant often implies that the departure was voluntary and that a decision to return is possible. It refers to those leaving for a better financial future or for economic stability, rather than because of life-threatening situations. He said the public is generally more sympathetic to refugees and less sympathetic to migrants, making the word choice meaningful.

However, many migrants have been forced from their homes through violence or persecution. In a real sense, anyone leaving a country to enter another one is a migrant until it can be determined if they left involuntarily because they were no longer safe in their home or if they were primarily looking for a better life and left for economic reasons. Asylum seekers who can prove they have a reasonable basis to believe they can’t return to their home countries are generally the ones granted asylum and the ones classified as refugees. Migrants include refugees, but are not exclusively refugees.

Further complicating matters is that someone who meets the UN definition and requirements might still not technically be a refugee. As reported in Vox in 2015 during what it called Europe’s refugee crisis, “someone isn’t officially a refugee until he or she is given that status by some official entity. Think of it as an official term, like ‘citizen’ or ‘permanent resident’—you can’t just say you are unless you have the documentation proving it.”

When it comes to Syria, many of those referred to as refugees fleeing their homes have yet to receive official refugee designation. And many migrants from Central America are seeking asylum. What it boils down to is the message emphasized. Until a person is given literal refugee designation, how they are referred to in the media seems to stem from the messaging priority of those talking about them or those publishing the story. Migrant implies the country the individual is traveling to gets to decide whether or not to let the person in legally. Refugee triggers humanitarian principles and a moral obligation to allow the person entrance to await a decision on asylum.

Both Mejia and Bonilla passed their credible fear interviews. The family is now in Brooklyn awaiting their asylum hearing. It’s been difficult for them, and their future hangs in the balance. Whether they are granted asylum or not, they don’t feel they can safely return to Honduras. As Mejia told the Washington Post, “I am sure I made the right decision.”