How can someone become a sponsor for asylum seekers? 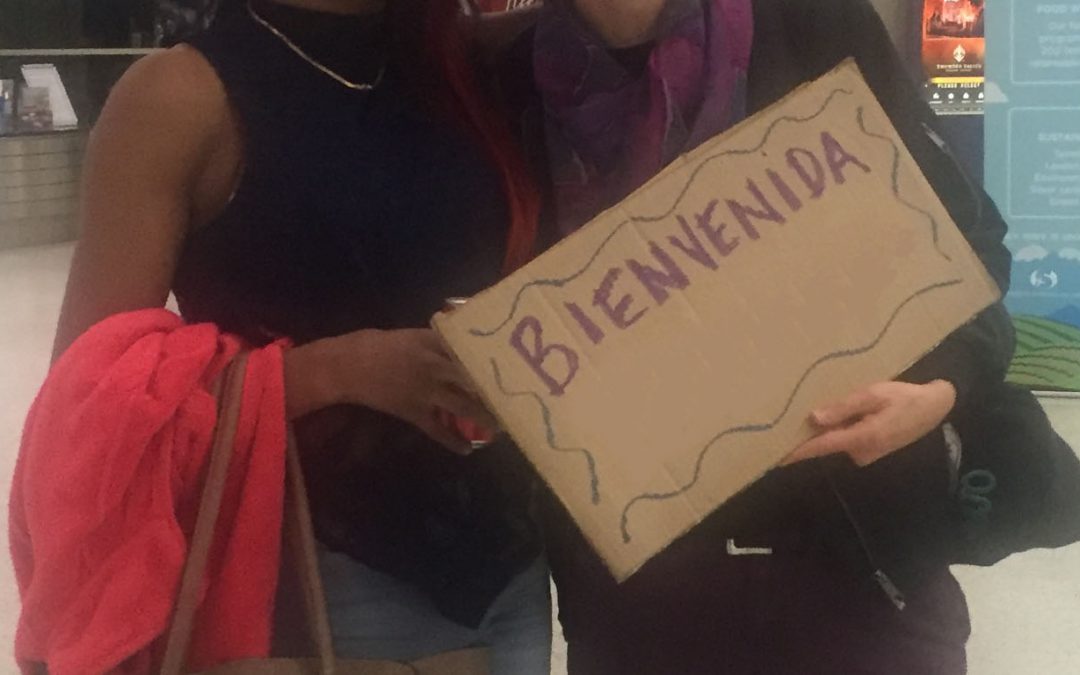 For Mya* and her partner, the decision to sponsor two Honduran transgender sisters seeking asylum in the United States just made sense. 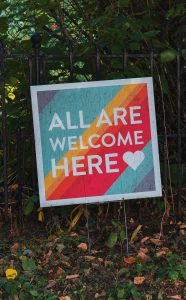 “I keep thinking about those ‘refugees are welcome here’ lawn signs,” said Mya, a professor in the San Francisco Bay Area. “What does this actually look like in practice? Sponsorship, I feel like.”

Mya, a fluent Spanish speaker who’d volunteered helping people fill out asylum applications in New York, and her partner, a health practitioner who specializes in transgender health issues, had just relocated to the Bay Area. Their new home had an extra bedroom and bathroom.

When a friend sent Mya a Facebook post detailing a need for sponsorship in the Bay Area for transgender women seeking asylum, Mya got in contact with Elaina Vermeulen, a transgender detention release specialist with the Santa Fe Dreamers Project, an immigration advocacy group that organizes legal support and sponsorship placement of asylum seekers. Many transgender asylum seekers are detained in Cibola County Correctional Center, a federally operated private prison in New Mexico.

Honduras is a dangerous place for transgender women. Impunity for violence is widespread, especially since the 2009 coup. Human Rights Watch reports that transgender people are among the populations most vulnerable to violence in Honduras. Fewer than one-fourth of violent deaths of LGBT people in Honduras are ever prosecuted, according to the Inter-American Commission on Human Rights.

Monserrat*, one of the sisters Mya is sponsoring, fled Honduras when transphobic violence threatening her family meant her country could no longer be her home.

“That’s why I had to flee Central America. Not because I wanted to. Not because this was my dream,” she said in Spanish.

Under existing policy, people who arrive at the border asking for asylum are typically detained for the duration of their asylum case unless they have a sponsor to receive them.

“The way the law is written, someone is detained if the government believes them either to be a flight risk or a danger to the community,” said Ariel Prado, program manager at the Innovation Law Lab. “So one thing that helps to show that someone’s not a flight risk is that they have someone to receive them.”

In Cibola, Monserrat said, prison guards harassed her, telling her she was a man and must behave like a man. She was put in solitary confinement for nearly three weeks and was denied her hormonal medicines.

Cibola came under public scrutiny last year following the death of Roxsana Hernández Rodriguez, a transgender asylum seeker detained there who died in ICE custody in May. A recent independent autopsy found that her cause of death was likely severe dehydration on top of HIV infection, and that she was beaten before she died. ICE says that Hernández Rodriguez was not abused in their custody.

“The truth is that in immigration detention, Central Americans don’t matter,” Monserrat said in Spanish. “They see us there as if we are animals, and we are not.”

But Monserrat couldn’t be released until she had a sponsor.

“The only way for an individual who is in the process of asking for asylum to be released is to a sponsor and a host, unless they’ve won asylum and been granted a release,” said Vermeulen.

While the Santa Fe Dreamers Project focuses on finding sponsors for and paroling transgender asylum seekers, Showing Up for Racial Justice has created a sponsorship matching program for asylum seekers across many detention facilities with varying nationalities, genders, and familial statuses. SURJ hosts a form on its website on which people can sign up to support the sponsorship process and host people in their homes. The Santa Fe Dreamers Project has a Google form for prospective sponsors.

Lawyers coordinating with these groups — including the Innovation Law Lab, where Prado works — petition U.S. Immigration and Customs Enforcement and the Department of Homeland Security to release detained individuals from custody to sponsors. Sponsors host asylum seekers in their homes while their cases are pending, and serve as the address on record to receive documents about court hearings. Advocates say sponsors should also have the ability to support someone who has experienced trauma.

“One of the biggest roles of the sponsor is to be there as a human face through all the really inhuman things that are happening,” Mya said.

After Mya reached out to Vermeulen, they spoke on the phone several times to make sure it would be a good fit.

Mya, Monserrat, and her sister enjoy In-N-Out Burger the night Monserrat arrived in the Bay Area. (Photo courtesy of Mya)

From there, things happened quickly. Mya sent proof of citizenship, address and income, as well as a letter detailing her family’s community support networks and connections with the transgender community. Twelve days after Mya sent her documentation, she picked up the first of the two sisters at the airport.

“One of the things that struck me about the whole process is how much power I had in it all — I could have been anyone with income and citizenship — and how little power the women who are detained have and how little credibility what they say is given,” Mya said.

Mya speaks Spanish fluently and had experience with asylum cases. Her partner is transgender and specializes professionally in transgender health. For them, sponsorship was a logical fit.

But you don’t need a special set of skills or knowledge to sponsor someone seeking asylum, said Rev. Elizabeth Nguyen of the Unitarian Universalist Association, one of the groups coordinating sponsorship with SURJ.

“I think we all bring skills and you never know what skills you bring that might actually be amazing,” Nguyen said. “The willingness to live with uncertainty and problem-solve like a champ and deeply respect someone else’s decision-making, those are the key things.”

“You have to find a way to both support them and also let them function like your roommate,” said Kari Points, who coordinates the sponsorship team for SURJ, a group that focuses on organizing white people in racial justice work. “We want to avoid situations where you feel like a white savior toward people. They’re adults, they’re going to live their life, they’re living in your house.”

Monserrat and Mya both said being able to communicate in Spanish was important. But Points notes that not all asylum seekers speak Spanish, and that roles are available for sponsors without these language skills.

Advocates stress that sponsorship is a serious undertaking.

“It’s actually an enormous commitment to ask someone to host someone in your home for six to 12 months,” Points said. Some people SURJ vets wind up getting involved in other ways: “putting money into somebody’s commissary account, accompanying them to ICE check-ins, helping a family buy groceries, or helping them find appropriate medical and mental health care or legal representation,” she said.

Mya and her partner have experienced the first few weeks of sponsorship as “both filled with joy and really difficult in some ways.” They’ve been learning to adjust to the new rhythms of having two new people in the home, enjoying spending time at the gym pool together, and accompanying the sisters to and from lots of doctors’ appointments. 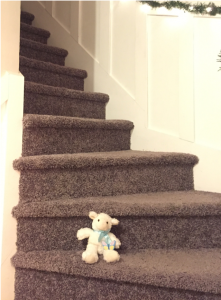 One of the sisters’ stuffed animals sits on the stairs that lead up to their bedroom at Mya’s house. (Photo courtesy of Mya)

It’s also an added financial responsibility, including paying for food, travel expenses, and clothing for the sisters, as well as providing an allowance so they have flexibility. One of the sisters developed an infection that resulted in an emergency room bill Mya is figuring out how to pay for. “We’re drawing on our communities in lots of ways for that too, and lots of other sponsors do that too,” she said.

On Thanksgiving, Mya and Monserrat’s family enjoyed dinner together with a deep sense of thankfulness for each other. “We shared what we were grateful for and there was a lot of mutual gratitude from both them and us,” Mya said.

For Nguyen’s family, sponsorship of refugees and asylum seekers is deeply personal. Her father and his parents, refugees from Vietnam, were sponsored by a family in Milwaukee in 1975 through Lutheran Social Services. Nguyen says the call to sponsor asylum seekers is fundamentally a call for people to live their values.

“I would really urge people to dig deep around what they have been taught about hospitality in their lives and to think deeply about what you would want if it were you,” she said. “What would you want if you were fleeing violence and you were a resilient powerful person fighting for your life and you were in ICE jail, and the thing that would get you out is someone saying ‘I will have your back for a while’?”

With thousands more asylum seekers from a recent exodus trying to enter the country, SURJ and the Santa Fe Dreamers Project hope to scale up their sponsorship placements. Monserrat is thankful to have been released and appreciates having sponsors who treat her with respect, unlike so many people she encountered in Honduras, on the journey, and in immigrant detention. But she keeps thinking of the friends she left behind in Cibola.

“There are more Central American sisters in there who long to get out,” she said in Spanish. “They hope for the miracle of news to arrive saying, you are getting out of here.”

*Mya prefers not to have her full name used, and the name Monserrat is a pseudonym. The precautions are being taken to protect them from retaliation by immigration authorities.