A visibility paradox permeates media coverage of Central American migrations to the U.S. 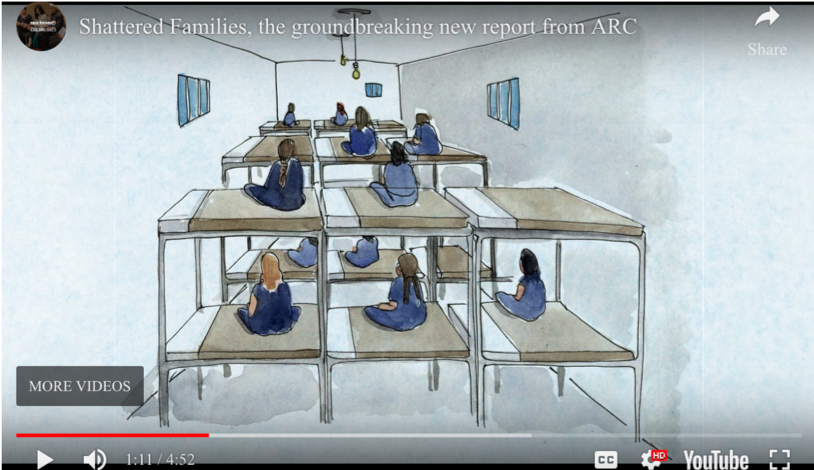 For Arlette Jácome, the hyper-visibility of Central Americans in the mainstream news cycle over the past several months has been “devastating.”

The daughter of Guatemalan immigrants, Jácome co-founded Central Americans For Empowerment (CAFÉ), at UC Berkeley in 2017. The group, specifically for Central American students, provides a space for them to meet one another, share culture, learn about their history, and have their specific needs represented in ways they can’t in broader Latinx spaces.

Jácome and other Central Americans find themselves in a paradoxical moment during which Central Americans are prominent in the mainstream news and on social media, but their voices, their concerns, and their collective history are still invisible.

The attention dates back to at least last April when President Trump, the Attorney General and the Dept. of Homeland Security announced a “zero tolerance” policy to address “a crisis [that] has erupted at our Southwest Border that necessitates an 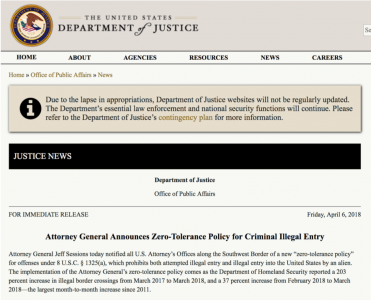 escalated effort to prosecute those who choose to illegally cross our border.”

In June, the administration underscored the need to eliminate ‘free passes,” and “get out of jail free cards,” to fix loopholes, to keep the U.S. from becoming a migrant camp, and to keep from encouraging “people to bring their children or other children to the country unlawfully by giving them immunity in the process.”

Trump blamed the Democrats and then-Attorney General Jeff Sessions justified the policy by invoking “the Apostle Paul and his wise command in Romans 13 to obey the laws of the government because God has ordained the government for his purposes.”

The policy intentionally separated families at the border. Following an uproar of public and political opposition, Trump issued an executive order on June 20 that limited the family separation policy and blamed its imposition on Congress. A disproportionate number of families that were separated were Central Americans seeking refuge in the U.S.

Then in October, Central American asylum seekers traveled together into Mexico and toward the U.S. border in what became characterized as the “Migrant Caravan. The effect was that Central Americans became the targets of the Trump administration and cause célèbres of mainstream news. Asylum seeking became synonymous with illegal immigration, Archi Pyati of the Tahirih Justice Center, wrote for The Hill in her piece, “To be clear: Seeking asylum at the border is not illegal.” At the end of November, a photo showing U.S. troops at the border tear gassing asylum seekers, including small children, went viral and sparked international outrage.

What makes this current moment especially devastating for Central Americans like Jácome is the indignity that outside of sensationalized examples of extreme violence and trauma, Central Americans continue to be dehumanized or rendered completely invisible by the U.S. mainstream.

Like Jácome, Daniel Alvarenga describes the current moment as “painful.” Alvarenga is a Salvadorian video producer and journalist for AJ+. Born in Los Angeles, his family came to the United States in the ‘80s and ‘90s as refugees fleeing violence during El Salvador’s civil war. Alvarenga says he felt “completely erased” from mainstream media while growing up.

“There was no media about us and what was [there] was very negative or very distorted,” he says. “El Salvador wasn’t prioritized and when it was, it was always an awful story of like gangs or abuse.”

One of the most pervasive tropes about Central America in the U.S. media is MS-13. Alvarenga says the media’s fixation on the gang has constructed a sensationalist profile of Central Americans that implicates them as being part of the gang. The failure to include Central American voices in the narrative about MS-13 “has led us to this moment where there’s all this fodder that’s used now to criminalize refugee children that are coming today,” Alvarenga says. “They’re targeting kids who are fleeing these gangs and accusing them of being in these gangs just by virtue of where they’re from.”

This makes the paradox of hyper-visibility and invisibility all the more damaging, Alvarenga says. “It’s not until very recently that people are actually starting to say ‘Central America,’ starting to name these countries,” he says. “A lot of the coverage has been ‘migrant children’ which also erases the fact that they’re refugees. Visibility is not humanization. They’re still being dehumanized.”

Roberto Lovato is a journalist who has been covering Central America for over three decades. He says the media’s current focus on Central American asylum seekers is “not so dissimilar” from the coverage he witnessed in the ‘90s, when Central American migration to the U.S. was at its peak.

“The first thing you have to really notice is the utter lack of coverage or the censorship and the curation of the story,” Lovato says. “So, for example, there were tens of thousands of people being killed in El Salvador [and] nobody here knew about it until intrepid journalists like Ray Bonner and Alma Guillermoprieto in the 1980s exposed massacres.

Similarly, today you have a pretty much non-existent context for why people are migrating,” he says.

Lovato says what is most notable in its absence from today’s coverage is how previous administrations—specifically the Obama administration—have laid the groundwork for the violence the current administration is now inflicting upon Central Americans. 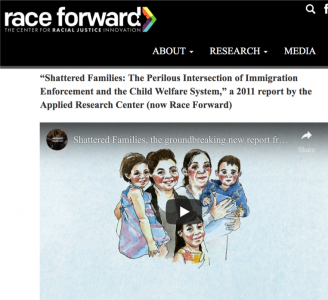 Click on the photo to view the 5-minute video, “Shattered Families: The Perilous Intersection of Immigration Enforcement and the Child Welfare System”

Lovato says political allegiances coupled with the possibility of physical and political threats often keep journalists and editors from fully contextualizing stories about Central America, which only causes more harm to asylum seekers.

Alvarenga sees the media’s failure to properly contextualize Central American migration to the United States as no accident. He believes that examining the root causes of Central America’s issues leads Americans down a “rabbit hole” that is “uncomfortable and is in nobody’s interest in this country” because it uncovers decades of U.S. violence and exploitation in the region.

Jácome echoes this idea. She says the media’s failure to fully and accurately contextualize the history of Central America makes it easy for the government and the public to reject asylum seekers. Between 2012 and 2017, the U.S. denied asylum to 12,300 Salvadorans and deported them, according to the Washington Post.

Also missing from the conversation is how the U.S. has “weaponized the desert” to impede undocumented entry into the country, which has led to the deaths of thousands of undocumented immigrants, according to Lovato.

“You’re putting boots on the ground with border patrol [and the] national guard in areas where migrants traditionally cross and it forces [them] to go to the most dangerous parts of the desert where they die,” he says.

The humanitarian-aid group No More Deaths, based in southern Arizona, has released several reports detailing what they say is how U.S. Border Patrol uses the desert as a “weapon against the unauthorized entry of refugees, migrants, and other border crossers.” Border Patrol strategies like the destruction of over 3,500 water jugs left for migrants in remote places in the desert led to the disappearance and deaths of countless migrants, according to No More Deaths, which, as part of the Unitarian Universalist Church of Tucson, advocates faith-based principles for immigration reform.

As a consequence of Prevention Through Deterrence, a 1994 Clinton-era Border Patrol strategy, which sealed off urban entry points and funneled people to wilderness routes, thousands of people died in the borderlands due to dehydration, heat-related illness, exposure, and other preventable causes, The Guardian reported in “Death in the sands: the horror of the U.S. Mexico border,” in 2016.

As recently as Dec. 13,  the L.A. Times reported that a 7-year-old Guatemalan girl died from dehydration and shock in Border Patrol custody.

Given this history of violence and exploitation, Jácome says the U.S. owes the region and its people a lot. For her, the first is allowing Central American asylum seekers into the country and granting them legal status.

“If their choice is to be here in this country, then they should be allowed to do that with freedom, without being detained, and with a chance of obtaining a legal status so that they also don’t have to fear and suffer more violence by being undocumented in this country,” she says. “The United States needs to do more around immigration because… it’s long overdue that we have a solution.”

Alvarenga says it will take generations for the U.S. to truly atone for everything it has taken from and inflicted upon Central America, but “at the very least it’s doing right for the displaced [Central Americans] that are in this country and making sure they have a dignified life.”

Lovato agrees, asserting that the history of U.S. involvement is too deep to bury.

“You can’t really atone for all the mass graves, and the killings, and the hundreds of thousands and, if you go back far enough, the millions of people killed by U.S. policy,” Lovato says. “What you can do is have a Marshall Plan for Central America. There also has to be a moral Marshall Plan where you have a massive acceptance of responsibility that begins to bring closure to the open wounds of impunity… between money, ending impunity, and admitting responsibility for mass murder I think that’s a start.”

Featured photo: Drawing from the 5-minute video, “Shattered Families: The Perilous Intersection of Immigration Enforcement and the Child Welfare System” on the Race Forward: The Center for Racial Justice Innovation site.