Palestinian-Americans describe being mistreated and denied entry into Israel 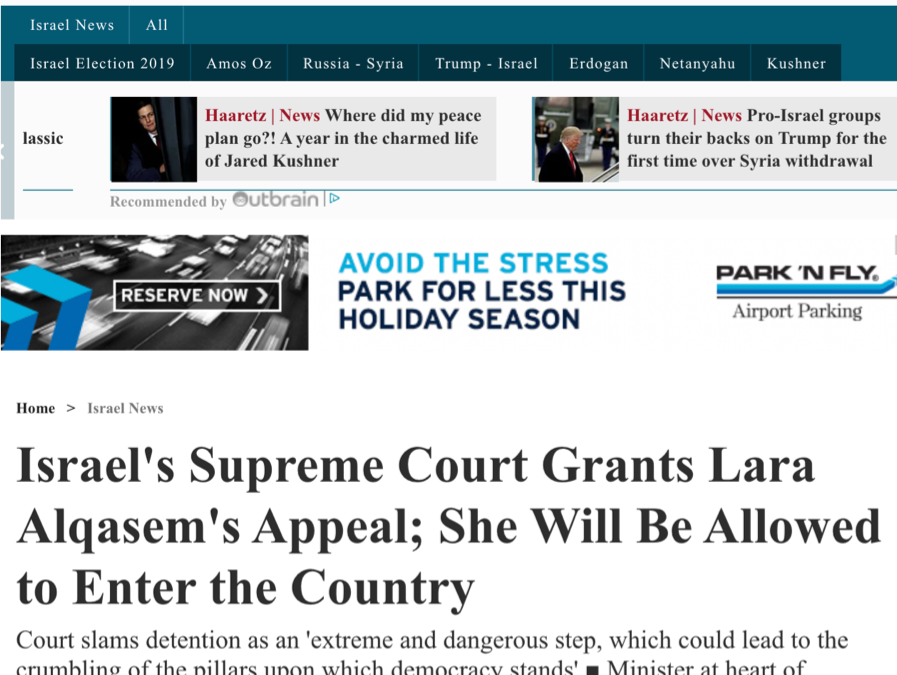 Marian Aldisi recalls the incident with horror and indignation. Last summer, on July 21, she was forced to remove her clothes and was strip-searched. She remembers the settings; three different interrogation rooms in which she fixated on the white walls, office desks and computers.

She was being detained at Ben Gurion Airport in Tel Aviv, Israel, on her way to the West Bank, a 2,000 square mile swath of land that is occupied by Israel and is home to about three million Palestinians and 500,000 Jewish settlers.

Aldisi is the chapter coordinator of American Muslims for Palestine (AMP), a Chicago-based organization focused on educating the American public about Palestine. Born in Jordan, Aldisi moved to Chicago with her family when she was 12 years old, in search of a better life.

She says she’s only been back to Jordan once since immigrating to the United States. She wanted to visit her hometown and the occupied territories, to understand more about what it was like there.

“I was going to Palestine, just to see Palestine,” she says. “I wanted to see what it was like in my country with my own eyes.” 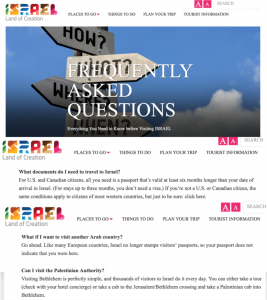 As an American citizen, Aldisi is not required to have a visa to enter Israel. A valid U.S. passport is sufficient, according to Go Israel, Israel’s official Ministry of Tourism site.

While being questioned, Aldisi didn’t express her true intentions to visit the West Bank to the security officers. Her passport was taken away.

“No one says that they are actually going to visit the Palestinian territories,” she says. “Because then they won’t let you in. They don’t want you to see the occupation and everything that is going on. So you just say that you are spending your time out of the occupied territories.”

Aldisi was not allowed into Israel. Dissatisfied with Aldisi’s background and answers, the officers decided to send her back to the United States. She regards that action as a deportation.

“The Israelis had no reason to do this to me,” says Aldisi. “I wasn’t deported for security reasons. It’s probably because my family is from Jerusalem and he (the security officer) didn’t want me to go back to my own country.”

She was to be flown to Istanbul, Turkey, and then to the United States. When she questioned the security officers about why she was being deported, she was told to shut up and not ask any questions.

“I was humiliated and not given a reason for why I was deported,” she says. “I was not able to see my own country.”

Aldisi’s ordeal did not end when she boarded her flight to Turkey.  But that’s not where it ended,” she says. “The Turks were even worse than the Israelis. It was unbelievable.”

At the Istanbul airport, Aldisi was forced to spend more than 12 hours in a locked detention room that she recalls reeking of urine and having nothing but a dirty toilet, uncomfortable chairs and a small television that was left turned off.

“That detention room was miserable,” Aldisi says. “I would put my head down on the table to try to sleep, but what seemed like an hour turned out to be 10 minutes. It was the longest 12 hours of my life.”

When she tried to speak to the Turkish officers to ask for an explanation, they continuously told her to shut up, she adds. 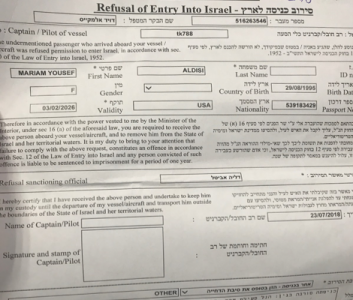 A copy of the letter Mariam Aldisi had to give to officials in Turkey. It states that she is not to be allowed back into Israel, and that if Turkish officials don’t comply, they could be subjected to a year in jail. (Photo courtesy of Mariam Aldisi)

Many Palestinian-Americans have reported similar encounters at Ben Gurion airport, without an explanation. In Oct. 2018, Lara Alqasem, a 22-year American student with Palestinian grandparents, was detained at the airport for her alleged support to boycott the Jewish state, despite having received a student visa to study at Hebrew University of Jerusalem. After her story was reported in Haaretz, one of Israel’s leading newspapers, Israel’s Supreme Court overturned the government’s decision and allowed her to enter the country. The Court pointed out that Alqasem’s desire to study in Israel undermines the premise of her alleged support for a boycott. It called the decision to not allow her into Israel a deportation that was based on her political opinion, which would be a radical and dangerous step that could erode Israeli democracy. Alqasem was then released from Ben Gurion airport, where she had been detained for more than two weeks, according to the Associated Press. Deanna Othman, the Chicago media coordinator for AMP, says that the deportation of activists and Palestinian Americans is on the rise.

“It’s just becoming more normalized,” she says with a sigh. “Getting questioned for hours first became routine, and now, people are getting deported too.”

Amira Daoud, a Palestinian-American, endured a similar experience in July 2018 when she flew into Ben Gurion Airport. She had her social media accounts scoured and was questioned for eight hours about her posts about the Israeli occupation in Palestine, she says.

“I deleted my Facebook account on my phone as a precaution before going in because I am politically active and I have posts about Palestine and ending the occupation,” she adds. “But we just have to assume that they can find whatever information that they want online because they have access to intelligence agencies.”

Before being refused entry, she was also required to sign a form 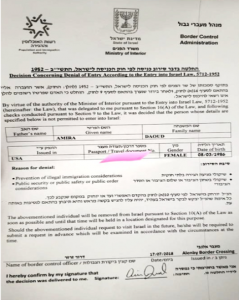 A copy of the letter that Amira Daoud had to sign before being allowed to leave Tel Aviv. It states that if she wanted to return to Israel, she would have to seek permission from the Israeli embassy first. (Photo courtesy of Amira Daoud)

acknowledging that she would not return to Israel without permission from the Israeli embassy. “By that point we were just so exhausted and I was travelling with my son who is five years old,” she says. “So we just signed the papers so we could go home.”

While many Palestinian-Americans believe that they are discriminated against, the Consulate General of Israel in Chicago insists this is not the case.

“Every country has the right to determine who can and cannot enter its territory. Israel is no exception,” says Renie Schreiber, a press officer of the consulate. “Israel enacted a law last year banning any foreigner who ‘knowingly issues a public call for boycotting Israel’ from entering the country.”

“Because Israel is situated in a volatile area of the world, and under constant threats, Israel will not allow entry to those who intend to harm the country,” he adds. “The authorities in Israel may deny entry for various reasons… [but] ethnicity, race or place of birth are not one of those reasons.”
—–