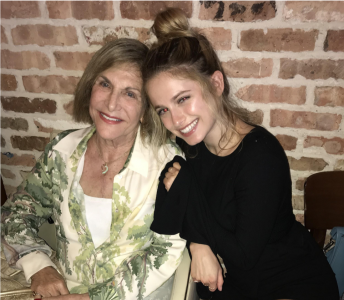 My grandmother, Joan Cramer, and me during my trip to visit her in May 2018 in Jupiter, Florida. (Photo credit: Family archive)

The golden Florida sunlight feels warm on my cheek as I sit at my grandma’s kitchen table on a balmy May morning. My grammy sits across from me, and she doesn’t look like herself. She’s home from the hospital after a combined heart attack and stroke, and her crumpled posture reflects the physical agony she’s working to overcome. Her change is more than physical. My once hardened, stern grammy has become softer, more sentimental, after tiptoeing around the brink of death. She’s yearning to tell the stories that are slowly re-entering her delicate memory. I beg her to tell the tale of her father’s immigration to the United States, and she obliges.

My great-grandfather Louis Moss immigrated to the U.S. around 1920, grammy tells me. He grew up in Russia, where he became one of the country’s preeminent figure skaters. Still, he didn’t feel welcome in his homeland. As a Jewish man living in Russia in the 19th and early 20th centuries, the threat of religious persecution trailed him like a shadow. His people were turned away from restaurants. Their businesses were burned to the ground. Pogroms plagued my great-grandfather’s community and my grammy tells me wistfully that the only reason my family was spared was my great-grandfather’s figure-skating fame.

When the fear grew too strong to bear, my great-grandfather decided that he and my great-grandmother had no choice but to leave. He was due to attend a figure-skating competition in Pennsylvania, and he saw his chance to escape and finally shed the cloak of anxiety that weighed heavily upon his shoulders. To not draw suspicion from his coaches, they packed their belongings into suitcases no bigger than what they would normally take to competitions and boarded a ship to America with the rest of the team and their spouses. As the ship sailed off and Russia faded in the distance, my grammy tells me, he knew that he would never return. When the skating competition was over, my great-grandparents fled from the team, determined to make a new life in Pennsylvania.

I leave my grandmother’s house the next night, her story lingering with me. I think back on my family’s history and feel an overwhelming sense of pride, tinged with sadness. I picture my great-grandfather, youthful and teeming with hope, watching the New York coastline crawl closer, and with it the promise of religious freedom. As I stare out of the window of the airplane home, I wonder what he would think about the anti-semitic acts that seem to be splashed across every newspaper I read today. I wonder if this is the America he imagined.

My faith feels like more than religion to me. It is my culture, my ethnicity, my history. As they traveled across treacherous seas, my great-grandparents safeguarded my faith and passed it down to my grandparents, and my parents, who finally gifted to me. I know that my great-grandparents on the other side of my family had a similar journey to the United States from Poland, also attempting to escape the religious persecution that faced them in their homeland.

I reflect on the feeling of comfort that has always accompanied my religious experiences. Growing up, the synagogue felt like the safest space in the world. As I sang the Hebrew words of songs I had come to know by heart but didn’t quite understand, I felt a direct tether to my ancestors who had sung the same words before me. That sense of safety dissipated as I walked into the Northwestern University temple past the policemen who guarded the doors in the wake of the shooting at L’Simcha Congregation in Pittsburgh.

The irony is not lost on me. For my great-parents, Pennsylvania promised to be a haven. They willed it to be a safe place, a land of solace where they could finally shed their dark shroud of fear and practice the Jewish faith as openly as they desired.

It seems like every week, I read new stories of anti-Semitic acts committed across the world, from France to California to my great-grandparent’s American home, Pennsylvania, and I am scared. I feel the hesitation that creates a nervous knot in my chest as I contemplate whether to attend a Shabbat service on Friday. I will myself to picture the knot that must have weighed heavily in my great-grandfather’s chest as he crossed the North Atlantic ocean, risking his life to freely pursue his religion, his culture, his identity. In my mind, I can so clearly picture the light that filled my grandmother’s eyes in her warm kitchen as she recounted the tale of her father’s perseverance. I see the glitter of his perseverance in the soft folds of my grandmother’s face as she fights the effects of her heart attack and stroke. No easy feat.

I understand that to let the knot of tension in my chest hold me back from attending Shabbat services would defy the perseverance that has carried down through my family, and I hope traces of this strength run through my veins as well. Reminiscing on my family’s history and struggle, I know that I will not, I cannot let my fear hold me back from practicing the religion that I hold so dear.