How do I tell Hayat’s story when I’ve been exposed to nothing like it?

I hesitate before sitting down on the red sectional couch in the Faidhallas’ living room, hypersensitive to how my actions will be received by my classmate and her family. Hayat Faidhalla, a junior at my high school, had detailed in an interview with me yesterday the terrifying, gripping tale of her family’s escape from the Iraqi War. Our initial conversation, which we did on school grounds, an environment familiar and comfortable to me, was deeply personal. But stepping into Hayat’s living room, an intimate and personal space for her and her family, my knee is bouncing, which is a nervous habit of mine. I’m feeling self-conscious. 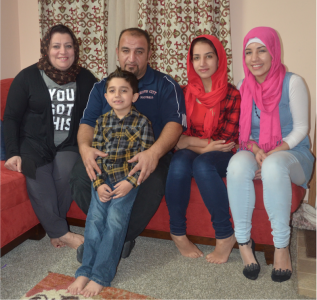 The Faidhalla family gathers in their Dublin home. Kareem (second to the left) was the victim of the attack in Iraq in 2005. Hayat (far right) was five at the time of the attack. (Photo credit: The photo was used in my high school magazine story)

One by one, Hayat’s family – her father Kareem, mother Nisreen, sister Alaa and brother Youseff – meander into the living room and settle onto the red cushions. I feel like an intruder, not only in Hayat’s home, but also into the personal, harrowing memories I’m about to ask the Faidhallas to recall. As a senior in high school, I know the Faidhallas’ story is significant and would make for a powerful, eye-opening story in the school magazine. But no interview I’ve ever conducted has demanded such vulnerability from others as this one does.

Hayat lands in the center of the living room floor. The only one not on the couch, she nods at me to begin. I explain to the family who I am and why I’m intruding into her family’s space and memories. Hayat takes on the role of translator. Seamlessly, she overlays my English with Arabic, echoing my questions to her parents. I am absorbed by the fluidity of our exchange. Hayat serves as the bridge linking me to the heart of the stories. Only through her do I have the means to hear her family’s immigration story. It is up to me, though, to convey empathy and sensitivity in my reporting.

Through Hayat’s translation, Kareem describes an attack on his family in 2005, when they were living in Iraq. The day before the attack, Kareem had let American soldiers near their home give Hayat a hug, an innocent interaction, but Iraqi men nearby perceived this as Kareem working with the Americans. In response, seven gunmen came to their door, shot Kareem multiple times and bombed their home. The Faidhallas escaped death and decided to flee to Syria, but not without injury. A bullet wound in Kareem’s hand got severely infected, and Hayat was mute for three months after the attack. Each gruesome detail takes an extra second to process in my mind. My classmate, a girl who could have been in my chemistry or history class at school, narrowly escaped this attack when she was five and came to the U.S. three years later.

I listen and insert questions sparsely. I’m captivated yet distracted with thoughts of Hayat’s strength and what she’s overcome.

I’m also conscious that my privilege is being exposed. I’ve never had to abandon my home, my friends or my extended family. The only gunshots I’ve heard have come through my television speakers. I’ve never encountered a threat on my life. Hayat did twice before she turned nine. I’ve never worried that I might get beaten at school because I forgot to do my math homework. That happened to Hayat and her sister, who were both smacked with a metal ruler for sneezing in class in Syria.

I haven’t read enough headlines to possess even a vague awareness of the trials immigrants and refugees endure before, during and after entering the United States. In witnessing the excruciating pain Hayat and her family carry with them in their memories and seeing a tear roll down Kareem’s cheek as he recalls his family being attacked, my ignorance feels inexcusable. If I want, I’m able to shy away from challenging, emotionally draining conversations. I can justify it because of a fear of overstepping or embarrassing myself with how little I know.

After talking about the Faidhallas’ lives since coming to America, the interview concludes. I rise to leave, feeling a different discomfort than when I arrived. Now, I feel grateful for the Faidhallas and their vulnerability. I also recognize the searing focus that comes with opening my eyes to those around me.

I still have a task ahead of me. I have to take the interview and turn it into an article for the school magazine, doing so with empathy and thoughtfulness. I don’t want to commercialize their memories or make their experiences sound like the plot of an action novel. 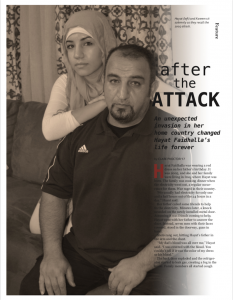 Cover of the story that ran in my high school magazine. [Click on the photo to read the story]

My words convey the facts of the story: “A trip to the doctor told [Kareem] that they would give him a shot and then cut off his hand,” I write. I still want to convey the emotion Hayat and her family feel surrounding the attack, but I worry I’ll misrepresent the family’s sentiments if I put too much of my voice in the article. Instead of trying to communicate that emotion through my own lens, I rely on quotes from the Faidhallas. I let their voices fill the page, quoting Nisreen as she says, “I was shocked [and] screaming, but I thought no one was hearing me.”

The article ran as the magazine’s cover story. I was never an actor in the Faidhallas’ story, but the family’s vulnerability allowed me to step into that space. My role as a journalist wasn’t to craft a perfect, compelling, attention-seeking article. My role was to listen empathetically and provide a platform to allow Hayat and her family’s voices to be heard.