I sit with my mom, dad and brother in our family room after returning from my aunt Diana’s funeral service and reception. It’s been 13 days since my mom’s only sister passed. Family and friends begin to trickle in. I try to engage in small talk but I have nothing to say. I am struggling to handle the emotions. As a 17-year-old, this is my first experience with a major loss in my family. The pain in the room seems palpable. 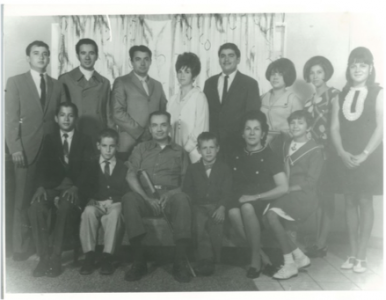 The Guzman family: my grandmother, Evangelina, her brother and sisters, and her mom and dad. (Photo credit: Family archives)

With a bottle of tequila in one hand and Squirt in the other, my uncle Oscar bursts through the door. The aunts and uncles cheer in his direction as they head to the kitchen. I sit, trying to figure out what is about to happen and what all the excitement is about. They get glasses for Palomas, the traditional Mexican cocktail consisting of Squirt and tequila. Drinks are poured and passed around to everyone. Someone turns on music. Our fridge and pantry get raided as food is put out for everyone. Stories are shared from past and recent times.

I’m being drowned in hugs by people I don’t recognize, telling me how much older I look. My mom joins in with her family. As Spanish fills the room, I sit with amusement and questioning, feeling like a guest in my own home. I’m unaccustomed to this side of my mom or to the abundance of Mexican culture and norms.

My relatives come up to me, speaking in Spanish. I put the Spanish knowledge from my high school classes to use, forming broken sentences that somehow relate to the few words I recognize in the questions to me. They ask me why I haven’t learned Spanish, considering my mom is fluent. I say I’m trying to learn but I wonder. Why haven’t I learned Spanish? I mean, this is part of my culture, right?

Most of the relatives are my grandmother Evangelina Guzman’s siblings and their spouses. That generation of Guzmans were all born in Atotonilco El Alto, Jalisco, Mexico with about a 24-year age difference between the oldest and youngest sibling. My grandmother moved to Northern California before my mom was born and over the years, the majority of her family joined her. With such a wide age gap between siblings, my mom was close in age to many of her aunts and uncles from Mexico. 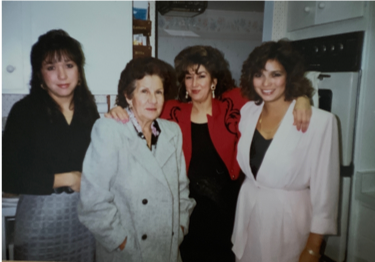 From left to right: My mom’s sister, her grandmother, her aunt, and my mom posing when they were younger. (Family archives)

My mom moved to San Diego when she was 24. She married my dad, a man with Italian and Irish roots, and they’ve stayed in San Diego ever since. Her American lifestyle has distanced her from her Mexican roots. Mexican culture is even more distant to me.

The rest of my extended family is deeply rooted in their culture. They live with it being at the forefront of their decisions and actions. For them, drinking, storytelling, oversharing of details, eating, displays of affection, and music is a part of every event, no matter the occasion, and Palomas are often the drink of choice.

Being surrounded by people in their community who also spoke Spanish, most of my aunts and uncles don’t speak English well. They assume I’d be able to speak Spanish. You pass on your culture to your children, which includes the Spanish language. It has come as a shock to them that their culture appears to be dying with my branch of the family.

My mom has suppressed the Mexican part of her identity, either subconsciously or intentionally, since she moved away and started a new life of her own. With each generation, the culture naturally fades and my brother and I haven’t been exposed to it.

As we left the reception, I felt encouraged to keep the culture alive and get more in touch with my Mexican heritage. It is vital part of my extended family’s identity and should serve a role in mine.

It has been about two and half years since then. Although the gathering remains ingrained in my memory, I’ve acted on it less than I’d hoped. My commitment is playing out slowly.

I’ve always wanted to study abroad in Europe and knew that it was something I would do in college. This fall I’ll be studying in Granada, Spain. I realize I should have chosen to study in Mexico, but  it wasn’t a serious consideration for me.  It seems I’m not willing to give up my dream of traveling around Europe.

Nonetheless, the desire to connect with my heritage played into my decision. I want to learn Spanish better and decided to go to a smaller city like Granada so I would have to use Spanish on a daily basis. I can become proficient, hopefully fluent. A smaller city also will allow me to immerse myself in Spanish culture. That’s one step closer to my Mexican roots in language and in removing myself from American culture.

This past fall, my dad brought up the idea to visit Atotonilco El Alto, the family homeland. I’ve wondered why my family hasn’t visited before or why we haven’t even thought of going. My dad wants to take my mom back and have my brother and me experience where my mom’s family grew up. I’m excited and hope we do it.

However, my mom isn’t eager to plan the trip and my dad isn’t the planning type. As summer approaches, I keep reminding my parents about it. I’m not confident.

I need a nudge or a spark or an epiphany, something simple or something compelling.

In my journalism class about connecting with immigrants, refugees, and multiethnic communities, I’ve chosen to focus on the Mexican community. Maybe I’ll find my cultural roots in other people’s experiences. It’s a start.