It’s 9:30 p.m., and the only people still inside Edina High School are members of the robotics team. We’ve been working since 3:15.

Click on the photo to visit the Edina Robotics site.

The dissonant buzzing of power tools in the workshop has stopped. Tonight is only one of many late nights that we’ve spent preparing our robot for competition in March.

My friend Yuanxi and I, both sophomores, wait in the lobby for our parents to pick us up. The upperclassmen are gone. Most of them have their own cars. The underclassmen, including Yuanxi and me, are stuck in the empty lobby until our parents arrive. Both exhausted, we make small talk to pass the time. We’re worried about the math homework that we haven’t started yet.

At one point, Yuanxi mentions that he has a B in math. Then he says, “I’m a bad Asian.” I’ve never heard him talk about his own race before, let alone use it as the basis for self-deprecation. Although he attempts to disguise his comment as a joke, the resigned look on his face tells me that he truly believes it. He believes that having a less-than-perfect grade means he’s bad at being Asian. 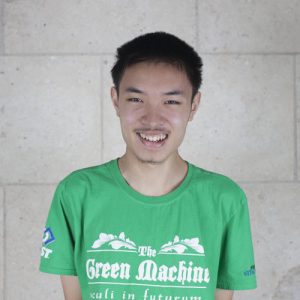 Not sure how to respond, I awkwardly laugh at Yuanxi’s comment and tell him that you can’t be good or bad at being part of a certain race.

I don’t know why Yuanxi called himself “a bad Asian.” Maybe American stereotypes about Asian people have convinced him that he needs to be smarter than his peers. Maybe his parents, who emigrated to the U.S. from China, have unrealistically high expectations for him. Maybe it’s a combination. I don’t ask him.

I feel sympathy for Yuanxi, but I don’t feel comfortable vocalizing my thoughts. Instead, I return to complaining about my math homework. I joke about the class and Yuanxi laughs.

A few more minutes of idle conversation pass before I see the headlights of my mom’s SUV in the empty parking lot. I say goodbye to Yuanxi, and my mom drives me home. She asks how school was. I tell her it was the same as usual. She asks how robotics was. I tell her we’re almost ready for the competition. She then tells me that she loves me and is proud of my work ethic. Typically, I would take the words, “I love you” and “I’m proud of you” for granted. This time, I don’t.

Eventually, Yuanxi’s mom picked him up. I’ll never know what Yuanxi and his mom talked about on the drive home. But after our conversation in the lobby, I had a feeling that Yuanxi’s relationship with his parents is very different from my relationship with mine.

Though Yuanxi and I attended the same high school, we lived in different worlds. As a white American, I’m essentially immune to racial stereotypes. Most of my classmates didn’t assume I was more academically gifted than they were. They did, however, expect this of Yuanxi. Maybe this expectation caused Yuanxi to believe that he was “bad at being Asian” since he didn’t have an A in math. I’ve never questioned whether I’m “good at being white.”

Four years after our conversation in the school lobby, I still don’t know whether stereotypes, parental expectations or a combination of the two caused Yuanxi to think of himself as “a bad Asian.” Up until now, I never found the courage to ask him.

Yuanxi and I don’t talk much anymore. He goes to the University of Minnesota. I go to Northwestern. I recently reached out to him about our conversation in the school lobby. He seemed surprised that I remembered the incident so vividly, but he was happy to talk about it. He told me his comment did, in fact, stem from both his parents’ expectations and his sense of not being “the stereotypical Asian.” He believes he lacks the “intellectual prowess” of a stereotypical Asian American.

Fortunately, Yuanxi says college has allowed him to shed the burden of unreasonably high parental expectations. However, he says stereotypes about Asian Americans still affect the way he views himself.

I hope Yuanxi now realizes that his value is not limited to his accomplishments. He’s the last person I’d expect to carry a burden of “bad Asian.”