Envision this shortcut to the American Dream: Find a girl with citizenship, and marry her

In a cozy and dimly lit Korean barbecue restaurant in Seoul in August 2019, the smell of grilling pork wafts as two middle-aged men take a sip of soju while enjoying joyful banter. The passersby outside the restaurant windows suffocate from the humid, scorching heat of the Korean summer. Between these men I sit, politely and reservedly under an air conditioner while my father enjoys a reunion with Alex Lee, a Korean friend of his from the days he studied film in Los Angeles. 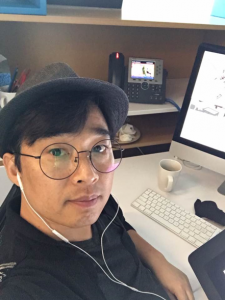 Alex Lee at his workplace.

An established animator who’s worked at Nickelodeon and now is part of the team for the renowned “Rick and Morty “ series, Lee shares stories of how he made it from the bottom. I ask him for advice, as an international student myself trying to get a shot at a career in the United States.

“Find a girl with citizenship, and marry her,” he says definitively.

In the summer of 1998, my family moved to Los Angeles to support my father in his graduate film studies at the University of Southern California. While it was a bold move for him, it was an even bolder one for Lee and his wife Dana. My parents had already graduated from a respected institute in Korea. Coming from an intellectual background and a college education in which English was essential, my father could engage in conversation in English. Studying abroad in another country was considered a luxury available only to such people. My father had an additional inducement; a study grant from the electronics conglomerate Samsung.

Lee’s decision to move to the United States was based on one driving line of reasoning; to follow his dreams to be an animator. No network, language skills, or funding had his back. He started from scratch with his Korean wife Dana.

Ever since they met as classmates in a film course at the California Institute of the Arts, my dad and Lee got together often. They

talked about film, the hardships for international students, struggles with the convoluted English terminology of academia, and, of course, homesickness.

The two became closer as they included each other’s families. Our family had them over for dinners, cooking Korean beef dishes along with a glass of soju and feeling at home. Lee, his wife Dana, and my parents all seemed much more comfortable speaking Korean when we got together as families. We stayed up late at night and during one period when the 2002 World Cup was held in our hometown, we wore shirts of red and rooted for the underdog Korean team. When we miraculously reached the quarterfinals, there were tears of pride, tinged with a longing for home that my dad and Lee felt they couldn’t let out during their day jobs. 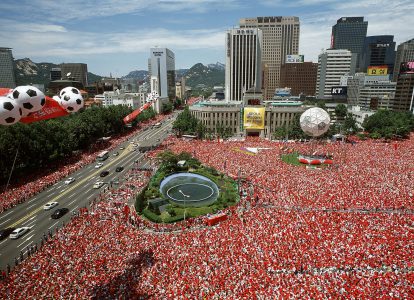 Lee learned English and honed his skills as an animator in Los Angeles. A decade later, he was animating his dreams at Nickelodeon, and now at “Rick and Morty.” His was a success story.

It has seemed to me to be the ideal American dream. For a long time, I’ve thought hardships was essential to the American Dream. As heroes in history often overcome an unfortunate childhood and eventually emerge in pursuit of an extraordinary goal, the modern day achiever of the American Dream, in my opinion, overcomes hardships with a determination for success. Uncertain statuses and cultural barriers, I’ve thought, are baked into the story, an adversity the person faces that tests their determination by overcoming it.

This is what I was thinking as we met in the barbecue place in Seoul. An inspiration to me, Lee was back in his hometown to visit parents he hadn’t seen for five years and I was spending summer break with my family. He’d called up my father a few days before to get together.

I’m a guy on the way to fulfill my own American Dream in the face of the homesickness and cultural barriers I’ve been experiencing as an international student.

An hour into dinner, there he sits in front of me, telling me to look for a partner with citizenship.

What I hear is not how his passions brought him from the bottom to where he is now. His story is not one of pride in overcoming the hardships of adjusting among people who grew up in a completely different cultural background or in the effort he’s put in to stand out and have his skills recognized in the film and TV worlds or in integrating culturally to make it.

What I mostly hear is how complicated the bureaucratic process for getting permanent residence is. Even after making a good living as an animator in the United States, he’s had to go through numerous background checks, inquiring into who he and his family are, how much he’s earned, if he has any criminal record and so on. He’s tried to start a company as a way to ease the process of getting permanent residence. He thinks it was just too much work, and he advises me to take the shortcut to citizenship.

My ideals of an American Dream have shifted. The beauty of the fairytale success story that I considered worth pursuing has been compromised.

I came away feeling that my efforts so far to overcome my own set of barriers to establish myself in American society could be in vain, or that I should refocus to find an American partner so I can simply check off the “eligibility to work in the United States” section in job applications.