The first question I asked him was “how would you identify yourself?” After a moment of thought, he replied “a quarter human.” When he noticed the glimmer of curiosity in my eyes, he reassured me that I would understand after he shared his life experience. 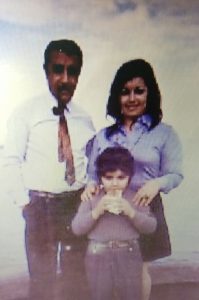 Mr. S as a child in a photo taken with his parents on the gulf in 1974. (Family archive)

Mr. S* was born in Kuwait and lived there until he was 22 years old. He grew up as an only child and described himself as being spoiled and allowed to indulge in the toys he wanted to play with and the fancy sunglasses he wanted to wear. Those were the golden days.

On Aug. 2, 1990, Iraq invaded Kuwait. That morning at 5 a.m., Mr. S woke up to the sound of planes flying overhead. Simply thinking that it was an early morning Kuwaiti army training session, he went back to sleep. It was only when he woke up again to leave for work that his neighbor came running with the news. “Suddenly we found ourselves in the middle of a war that has no reason,” said Mr. S.

For months, Mr. S and his family lived in a constant state of fear and anxiety. His golden days turned into day-by-day survival to find food to eat and water to drink. During this time, he was also kidnapped and held captive by Iraqi army officers who wrongfully accused him of being a betrayer as an Iraqi born in Kuwait. It was a trauma in all its meanings, as he put it.

Six months after the attack, Kuwait was liberated from Iraq, but Mr. S was not liberated from fighting for his life. After the liberation, multiple Kuwaiti militias began a hunting game targeting those who affiliated with the countries supporting Iraq. Being an Iraqi born in Kuwait, Mr. S found himself as a target of violence, solely due to the fact that he is an Iraqi. He survived three attempts of Kuwaitis trying to kill him. Twice someone tried to run him over with a car and once someone shot at him in his home.

“Nothing can describe what you feel. You are targeted. You can be killed at any time. There’s no food. There’s no water. I lost around 60 pounds of my weight at that time and we were barely living,” said Mr. S. “No one as a human can live in this kind of circumstances.”

After barely surviving these circumstances, Mr. S and his family decided to leave Kuwait even after its liberation. The plan was to flee to Jordan in hopes of escaping the violence and finding a better life. He was instructed by his parents to leave first, He used all the money he had to pay for a cheap studio apartment, where he lived by himself for three months. 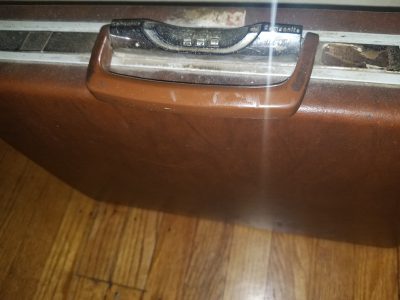 The suitcase Mr. S used instead of a pillow when he lived by himself in the studio apartment in Jordan (Dec. 1991)

“I was sleeping on the ground without a mattress. I didn’t have a pillow to put my head on. I didn’t have a blanket and I felt very cold. I was shaking. I had all of these memories from what happened,” said Mr. S.

This was when PTSD began to manifest. “I was tortured by my symptoms. I couldn’t understand what they were. I can’t say that I even felt pain at that time because I was the pain itself,” said Mr. S.

I could hear his voice quivering and I saw the pain in his eyes. “I wish that I died at that time,” said Mr. S. “I was praying to God to die. I didn’t want to continue my life.”

He took a moment to pause and think. “You know, when kids grow up, they see the world like paradise,” Mr. S continued. “The sun out smiling, there’s butterflies around you and small wind comes to play with your hair. And then you discover suddenly that this is not the real world. The real world which I saw at that time was cold, dark, full of demons, full of hate, full of blood, full of things that I did not see in my past life. So, I just did not want to accept this life.”

In 1994, Mr. S and his family moved to Iraq upon hearing the news that sanctions against Iraq would be lifted. They thought it would be easier to continue their lives there. In Iraq, Mr. S went to university, got a bachelor’s degree in psychology, and got married.

When the 9/11 attack struck, Mr. S decided that it would be best to move back to Jordan. He feared another war would break out in Iraq. Upon moving back to Jordan, Mr. S again became subject to daily humiliations and acts of discrimination from the Jordanians who claimed that the refugees were consuming their country’s resources and jobs. Not wanting to be constantly discriminated against and forced into silence, Mr. S applied for asylum through the UN Refugee Agency to get out of Jordan and into any other country.

Around 2004, as he was engaging with agencies working to help refugees and asylum seekers, he found his career path. He began to work for a number of international agencies supporting refugees, asylum seekers and victims of war. Through his work as a psychosocial counselor and case manager, he began to see how others were suffering from the same PTSD symptoms as he was. With his clinical knowledge as well as his personal experience, Mr. S found passion and purpose in his role.

“I saw myself as a rescuer for those people. Every single smile I can see on a face of a kid or an elderly or an adult makes me have the power, to renew, actually, my energy to go on and keep on helping these people and giving the support that they deserve,” said Mr. S.

It took six years for him to be accepted by the U.S. as a refugee. After what felt like an endless process, Mr. S and his family were given only two weeks to pack up their lives and leave.

They settled in Chicago and he found a job at a refugee resettlement agency. For three years, he helped refugees with their daily needs, acted as an interpreter and worked to address the cultural differences that color people’s psychological experiences. Mr. S found pride and happiness practicing his role of helping people. “It is something that I feel can feed my soul and give me the energy to keep hoping things will be good in the future,” he said.

About a year and a half ago, Mr. S was laid off due to the agency’s reduced funding and government assistance at the hands of the Trump administration. To manage his daily expenses, Mr. S took out a big loan and bought a car to work as an Uber driver. He’s fine driving for Uber, but he feels sad that he can’t provide support for those in need as he observes an administration that has had a harmful impact on many immigrants and refugees, and on him. He believes that these people can enrich the American culture with their thoughts, their experiences and their knowledge, but the current policies are abandoning the people who are in need of protection. “I hope this is a temporary cloud America is experiencing now,” he said. “But I believe in the people of America. The first sentence of the Constitution says, ‘we the people.’ And I believe in this sentence.

I believe in people and I believe that they will change something in the future.”

Mr. S shared that from his own experience living in different countries and interacting with different communities, he believes people in general are good. But he’s realized that sometimes, there are people whose motives lead to the manipulation of others’ thoughts on how to see the world.

“When people get manipulated, they can see others like monsters. They cannot see the human side of those people. They can consider them as their enemies. Unfortunately, one of the biggest mistakes in the humankind is generalization,” he said. “When we talk about communities sometimes, we generalize stereotype thoughts about this community, and we don’t distinguish or differentiate individuals. We can paint with one brush, with one color, all communities that contain millions of people, which is not fair. This is not fair.”

Mr. S said that PTSD is not an experience that you can forget, just something that you have to learn how to process through. Mr. S said that to this day, PTSD has had a huge impact on his soul and his life. But he has hope that things can change if he goes back to his role of supporting people. “Maybe that will recover me and let me become half a human or three-quarters human because this is what makes me feel my value,” said Mr. S. “I want to feel my value again. I want to play a good role in the community. I want to do good things to people. But I can’t do that now.”

A few weeks ago, I called Mr. S. He answered, brimming with happiness. He told me that earlier in the day, he became a naturalized citizen of the United States.

At 50 years old, he took an oath of allegiance. “I felt that I was really born today. As if my past life was a long nightmare,” he said. “But in the deep side of my heart, those memories are eternal.”

** Due to the PTSD symptoms that he is still coping with, Mr. S asked to keep his identity anonymous.