What are the plans of employers who rely on immigrant labor for seasonal agricultural work if the labor supply is cut off or curtailed?

Expansive rows of vineyards are located throughout California, stretching for miles.

One of their companies, Fresh Harvest, like many other companies in the agricultural industry, relies on the work of immigrant labor in supplying a workforce for farmers. According to the National Agricultural Workers Survey (NAWS), in fiscal year 2015 to 2016, 69% of hired farmworkers were born in Mexico and only 24% were born in the United States.

California is the biggest agricultural producing state and has a higher share of foreign-born farmworkers than the rest of the country: 95% are foreign born and 91% are born in Mexico. California farmers are experiencing employee shortages, according to the California Farm Bureau Federation.

“I would say it’s been eight to 10 years where there has been a slow decline in the workforce. I think a lot of these guys are moving from the ag industry to the trades,” says Todd Clow, the vineyard operations manager at Ferrari-Carano located in northern California.

Scaroni also points out that the number of people wanting to join the agricultural workforce is declining in general.

Fewer people are interested in the industry but it isn’t an industry that’s going away. It’s apparent that there needs to be a way to revitalize the workforce or get people attracted to the agricultural business.

“It’s not a very sexy profession. People want to be stock brokers, or financial advisors, or engineers, or lawyers, or doctors, and agriculture has lost its shine for young people,” says Bill Plourd, president and CEO of El Toro Export, a diversified agricultural marketing company based in California’s Imperial Valley.

The NAWS study also found that about half of the hired crop labor force is authorized to work in the US. This means that almost as many workers are unauthorized. However, since 2007, the number of undocumented immigrants, specifically from Mexico, has been declining, reducing the number of laborers available for work the U.S.

There has been a movement of undocumented immigrants moving back to Mexico with fewer coming in illegally. It’s more costly and dangerous to get into the United States now. With increased deportations, border patrol and enforcement, employers are in a bind. The fear of getting caught for an illegal workforce is more real than before.

“I know for a fact there are farm labor contractors that if immigration or INS came in and did a sweep through their operations, they’d lose easily half of their workforce because they don’t have the legal authorization to work, ” says Clow, who has moved to a more legal and stable workforce through the H-2A visa program.

Right now, employers can get H-2A visas, which are for temporary agricultural workers, to supply their labor legally from other countries, normally Mexico. 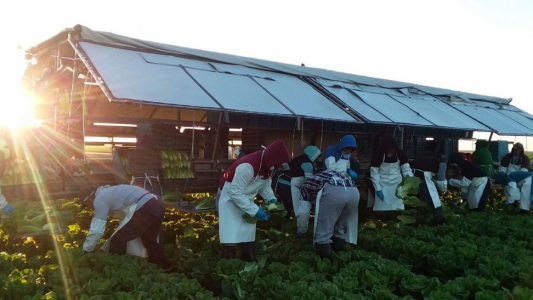 “It’s our only legal supplement of having enough work force to staff what our industry needs to get the job done and keep our country fed,” Scaroni says when discussing why he uses H-2A visas. (Photo courtesy of Scaroni Family of Companies)

Fresh Harvest is the 3rd largest employer of H-2A visa holders in the United States, according to the Office of Foreign Labor Certification of the U.S. Labor Department. Authorized laborers needing H-2A visas face a complicated and costly process.

“It’s a pretty nuanced system to use and there are five different government agencies that oversee that program,” remarks Clow. “You can only imagine the regulations and compliance issues in that program that we grapple with. It’s nothing major, it just can be very time consuming.”

His company has hired an immigration attorney to make sure they don’t run afoul of any rules and regulations, which just increases an already costly program.

The American Farm Bureau Federation reports that the H-2A visas provide less than 4% of the agricultural workers needed. Relocation costs into the United States, from the border to the farms, visa expenses, housing, meals, and bus transportation on the job are just a few of the many costs that come with the visas, and the employer foots all the costs.

“[The workers under the H-2A visa program] don’t pay for anything while they’re here except their groceries,” adds Clow.

Fresh Harvest has three recruiting offices in Mexico where they personally go to recruit 200-300 workers at a time mainly to help with harvest. Although it’s an intensive process, they rely on the visas to get the number of workers their farmers need to harvest.

Plourd doesn’t rely on H-2A visas because all his workers are full time, not seasonal but he has concerns of his own for the future workforce. El Toro Export’s facilities are five to 20 miles from the Imperial Valley border so he estimates that half his employees work under green card programs, traveling back and forth from Mexico every day. The other portion of his workers are U.S. citizens, mostly children of immigrants who were born in the United States or who are naturalized.

Plourd anticipates that five to 20 years down the line there will be a smaller labor force. Many of the undocumented immigrants in the U.S. have children who are legal and contribute to the workforce. There needs to be a better way to bring immigrants in legally, because we’re going to need that work force, whether themselves or their children, he cautions. Undocumented immigrants make up such a large majority and many times, employers don’t even know their workers are undocumented.

“Most employers think they’re hiring legal,” Plourd says, and his intentions are to hire legal too, but he’s been approached by ICE agents who don’t trust that that some of his workers have proper documentation.

Plourd believes that a transition to machines will create more high-end tech jobs and needs in the industry and it will start competing with the tech companies for professionals.

Ferrari-Carano already utilizes automation to help with a large portion of its process. It has 12 mechanical harvesters that harvest 60% of the 1400 acres the company has to harvest. They still rely on the labor of their workers.

“Automation and the H-2A program are the two big things that we are completely sort of married to at this point,” remarks Clow.

With increasing costs and diminishing labor market, another option Scaroni believes will become more popular is to have work done outside of the United States.

Scaroni Family of Companies moved a large portion of their work to Mexico. Harvest Tek de México is their farm in Mexico where its produce grows. Many of their workers that come to the U.S. on the H-2A visas already worked on their farms in Mexico. 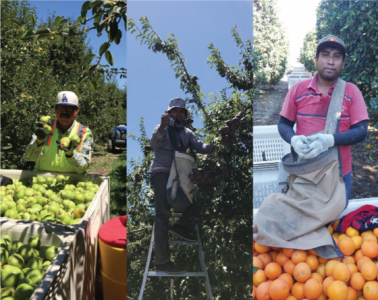 However, if a large sector of our agricultural is grown outside of the United States, it will affect the economy in a bigger scale than some might think.

The industry is needed in the United States to provide people with their food source at an affordable cost and a foreign labor force is needed to supply it.

“Nobody is taking jobs from anyone. There’s a shortage of labor necessary to get the jobs done,” Scaroni says.

Changes have to be made and with current immigration laws and the climate around these issues, the answer is unclear. The marketplace will have to adjust to figure out a solution. The California Farm Bureau Federation survey reports that the most common action taken by employers is to offer increased wages, benefits and additional incentives to keep their workers in the industry.

Americans still have not been attracted to the industry despite positive benefits. The H-2A visa program is utilized because it brings in a labor force willing to work. A requirement to obtain these visas is to provide evidence that there are not enough U.S. workers to do the job.

Whatever the agricultural industry has for its future, it is evident that there needs to be a guest worker program and one that is more accessible and cost effective than the current H-2A. This industry and the supporting industries need immigrant labor sources to fill the needs of an industry that produces a commodity that so many people rely on in their daily lives.

“Agriculture is a huge part of our economy here in California and I think it’s up to leadership to come up with a proactive respectable solution how we combat labor shortages and not just in agricultural,” says Clow. “There is no other solution as far as I can see.”