With the 2020 presidential election approaching, which political issues are most important to voting-eligible Mexican Americans?

When Professor Mario Garcia cast his ballot in the 2016 presidential election for Hillary Clinton, the issue of immigration wasn’t at the forefront of his mind. Garcia’s father had emigrated to the U.S. from Mexico. Garcia was concerned with other political issues.

“What was most important were issues like wages, affordable health care and education,” said Garcia, who teaches Chicano and Chicana studies at the University of California, Santa Barbara. “These are the basic issues that all Americans care about, regardless of their ethnicity.”

The day he officially launched his campaign in June 2015, Trump said that the Mexican immigrants coming into the U.S. bring drugs and crime, and include rapists and some good people.

He was asked many times if he wanted to reconsider what he said. He declined, saying, “I can never apologize for the truth.” A month after his statement, he clarified, “The Mexican government is forcing their most unwanted people into the United States. They are, in many cases, criminals, drug dealers, rapists, etc.”

In the final presidential debate in October 2016, two weeks before the election, he turned his attention to the Mexicans who were already in the U.S. “Once the border is secured, at a later date we’ll make a determination as to the rest. But we have some bad hombres here and we’re going to get them out.”

Garcia believes that attention to Trump’s rhetoric is a distraction.

A Pew Research Center poll in 2016 revealed that the three most important issues for registered Latino voters in the 2016 election were education, the economy and health care. Immigration ranked fifth. 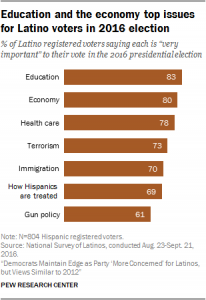 Although not all of the Latino voters surveyed were Mexican, the majority of the Latino population of the U.S. is Mexican. It’s reasonable to assume that the Mexican American community ranks these issues in a similar order.

Trump is running for re-election in 2020. In the first three years of his presidency, his stance on immigration has changed little, if at all.

Have the priorities of Mexican American voters changed?

Ahead of the 2018 midterm elections, The New York Times reported that “immigration is important, but it’s not everything” for Latino voters. Furthermore, the issues that Latino voters view as important vary across voters’ ethnicities and home states. For instance, while a Mexican American voter in California might vote Democratic, a Cuban American in Florida might lean Republican. So while it’s easy to assume that the Latino community votes overwhelmingly Democratic, the reality is more complex.

Earlier this year, Politico found that Hispanic support for Trump has increased recently. In February, Trump’s support among Hispanic voters jumped from approximately 22 to 35 percent. A poll by Reuters and Ipsos found that Hispanic support for Trump is higher than ever before. With increasing numbers of Hispanic Americans (most of whom are still Mexican) supporting the same man who has pushed for a border wall since the first days of his 2016 campaign, it’s possible that immigration has actually become less important for these voters now than it was three years ago.

Although the Mexican American community has apparently increased its support for Trump, Garcia believes it’s imperative that the country elect a candidate with a more progressive immigration policy.

“Trump’s immigration policy is a disaster,” said Garcia. “Not only does it hurt the economy by deporting workers, but it’s also inhumane and immoral. His policies have affected the community in so many negative ways.”

The Pew Research Center suggests that Hispanic voters might prioritize education over other issues because college enrollment among Hispanic Americans has historically been lower than among other ethnic groups. 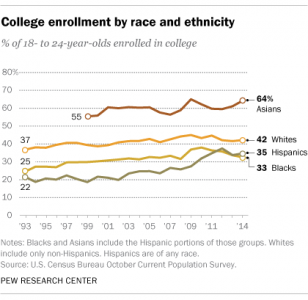 As a whole, Hispanic Americans are typically less wealthy than Americans from other ethnic backgrounds. Because of this, it makes sense that they would want to elect candidates who promise more accessible higher education. This rationale could also explain why affordable health care is especially important to Hispanic voters.

The economy is one of the main issues influencing Garcia’s vote. He says the economy and immigration are closely related.

“Undocumented immigrants are contributing a great deal to the economy by doing the jobs that many other Americans don’t want to do, and contrary to popular belief, they’re also paying taxes,” said Garcia. “I tell my students that when you discuss the issue of undocumented immigrants, you have to discuss it in economic, political and moral terms.”

So perhaps it’s not entirely logical to rank political issues separately based on their importance to the Mexican American community. The issues perceived to be the most important — education, health care and the economy — are closely intertwined. And based on Garcia’s reasoning, immigration is connected to those issues as well. Yet the fact remains that contrary to what many believe, immigration is not the issue with the most influence over most Mexican American votes.

Ultimately, according to Garcia, the most pressing concern for the 2020 election is not any specific political issue. While education, health care, immigration and the economy are all important to him, he says his top priority for next year is electing a new president. Although the broader Hispanic American community appears to be increasing its support for Trump, Garcia believes it’s imperative that the country elect a more progressive president next year.

“Trump is a joke,” said Garcia. “He’s running the government through his tweeting, and we can’t be governed that way. He’s caused so many divisions in our society. He has prevented us from being a united people.”