How does the idea of Indian Americans being “model minorities” impact their political beliefs?

Two of the most recognizable faces for Indian Americans in the 21st century are Bobby Jindal and Nikki Haley, both politicians and both Republicans. 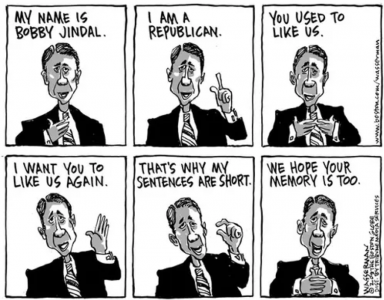 Cartoon by Dan Wasserman, published on Out of Line: a notebook of graphic disobedience. Click on the cartoon to access the original cartoon.

Yet Indian Americans identify as Democrats at ten times the rate they identify as Republicans, a rate similar to African Americans. As a result, many Indian Americans are disappointed by representation through Jindal and Haley, who are often criticized for exploiting their parents’ immigration stories while rejecting aspects of their South Asian cultural identity. Haley may have even more support in India than in the U.S., according to a story in The Daily Beast.

“When Bobby Jindal feels the need to change his name to Bobby Jindal, it’s how much can you try and get set into the corporate center?” said Abubakr Meah, immigration attorney and program manager for the Indo-American Center in Chicago.

Jindal is notable for being the first Indian American to run for president, with a short-lived campaign in the 2016 Republican primary. Born as Piyush Jindal, he decided as a child to change his name to Bobby based on a “Brady Bunch” character. He also converted to Catholicism from Hinduism and claimed in interviews to not celebrate traditional Indian ceremonies. Jindal is also known for appealing to his Louisiana constituents by adopting a southern accent and shooting firearms to garner legitimacy in the form of assimilation.

Like many conservatives, Jindal and Haley are hardliners when it comes to immigration reform, with Jindal supporting Trump’s proposed border wall. Instead of using their immigration stories as inspiration, Jindal and Haley appeal to conservatives by distinguishing their legal immigration from the patterns of undocumented immigrants. Since Indians are one of the largest immigrant communities, a crackdown on total immigration would inadvertently hurt their communities despite perhaps being “model minorities.”

The idea of the “model minority” began to emerge in the mid-20th century, as a result of mostly East Asian immigrants, not Indians. In fact, Indians only numbered about 12,000 in the United States 1960 Census, according to a 2017 spotlight in the Migration Policy Institute on Indian Immigrants in the United States. Newspapers began printing positive things about the hardworking nature of Asian immigrants and slowly employees began paying them wages closer to their white counterparts, while Black and Hispanic employees lagged behind financially.

While Meah considers the “model minority” characterization a myth, the data are indisputable. Indian Americans on average earn $107,000, nearly twice as much income as native-born Americans, who earn on average $56,000. Additionally, 77% of Indians in the United States have a bachelor’s degree, which is almost twice the percentage of native-born Americans.

Part of the reason Meah believes model minority status is a myth is because the South Asians he represents every day in court tend to lack education, money or opportunities upon arriving in the United States. He warned against using sweeping statements, as there are so many individual experiences within one nationality.

Indian immigration began before 1965. One woman, who proudly revealed her support for President Trump and preferred to be identified as a “70-year-old woman,” recounted that her family arrived about then. Early Indian American immigrants tended to come from wealthy upper castes and in comparison to the general population of the new countries of India and Pakistan, which were formed after the partition of British India in 1947.

For her, a local concern was that community residents were Muslim and from Pakistan or Bangladesh rather than India. She said 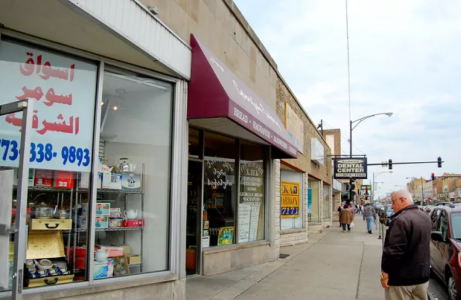 her community on Devon Avenue in what is considered Little India now has a notably different feel than it did in the past, with restaurants and businesses now advertising in Arabic.

Only 38% of Indian Americans arrived before the year 2000, most of whom between 1965 and 2000. This immigrant bundle which the 70-year-old woman is part of, mostly came for education and opportunities, afforded by new wealth in India and connections with family already in the United States. This woman was able to get a doctorate degree in the 1970s, something which was very rare for immigrant women of color.

Indian Americans who came after 2000 on H-1B visas to work in technological industries are a large reason for the shift in American perception on Indians. Indians are not seen as Asians by many, despite India being an Asian country, but many American stereotypes about East Asians financially and socially have transferred to Indians.

One of these assumptions is that model minorities are deferential, which can also apply to criticism of Jindal and Haley. Haley, especially, was scrutinized for flipping positions on a number of issues such as the use of confederate flags.

While Meah stated that residents from various backgrounds get along well on Devon Ave., the perpetuation of the “model minority” narrative around Indian Americans has strained relations  between immigrant communities, or as Aditi Natasha Kini put in her piece, “The Model Minority Is Not a Myth: It’s Ajit Pai,” “This is how the model-minority story operates: It leaves out details of structural privilege and access to resources while prioritizing narratives of white-approved success.”