It can be suffocating in the land of opportunity

In this room, I struggle to breathe. I am lightheaded. My grandmother, Kitty, smokes indoors. She also hates the smell of tobacco, so she sprays deodorizer to cover it. The walls, once white, are now a sickly yellow-brown. The combination of cigarettes and Lysol hangs in the air, thick and suffocating. 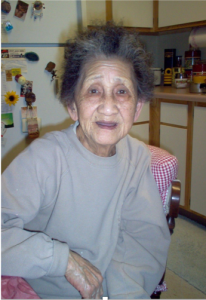 Kitty’s judgment manages to cut through the smoke. As we walk in, she doles out criticism to each of us one by one: my brother’s long hair, the way I dress, my mother’s weight, my father’s quietness, nothing is out of bounds. It makes the room feel all the more suffocating.

My father sends my brother and me out to the golf course behind Kitty’s apartment. He gives us a dollar for each golf ball we find lost in the grass. I’m oblivious that he’s trying to keep us out of that room and the suffocating air within.

Kitty was incredibly bitter in the time I knew her. The trauma she’d suffered at the hands of those around her had hardened her over the years, causing her to lash out at anyone with whom she came in contact. She rarely strayed from her apartment and had few if any friends. She referred to those who reminded her of her abusers as “stupid” and “dirty.” I was almost embarrassed to be seen with her, lest she say something unsavory in public.

Kitty, born Katsuko, grew up in Kobe, Japan. Her family was wealthy and well connected. Her future was 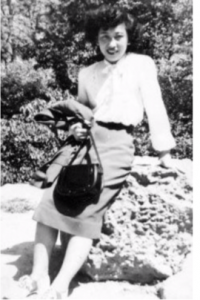 Kitty as a young woman (courtesy of Julia Andrew-Eickhoff)

bright. That is, until my grandfather, an American G.I. stationed abroad, wandered into her family’s Sake store. Six weeks later, Kitty eloped with him, leaving behind an arranged marriage, shaming her family’s name and dramatically changing the course of her future. 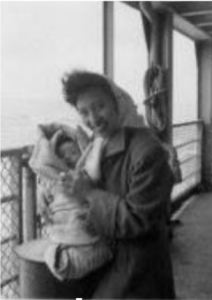 In 1953, Kitty boarded a boat with hope in her heart and a new baby in her arms, sailing to the land of opportunity.

Once in the United States, however, the American Dream seemed less attainable. Kitty lived with her family in a single-wide trailer, no white picket fence in sight.

My grandfather, who had once sent her loving tape recordings from his army base, became physically and verbally abusive. He eventually abandoned her, leaving her with five children and unable to drive or speak English fluently. 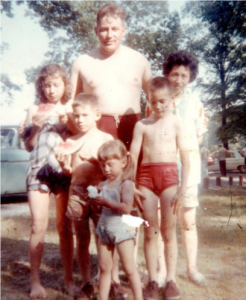 She walked two miles to work every day, where she wrapped candy for less than $2.30 an hour. Her coworkers treated her poorly, mocking her and not allowing her to interact with customers because of her accent.

She faced isolation because of the language divide and discrimination by her neighbors. She didn’t often leave the trailer because she wasn’t able to drive. The Korean and Vietnam wars heightened racism against her, though she was neither Korean nor Vietnamese. She lived in such poverty that her children were sent home from church one day with a note saying not to come back until they had nicer clothing. It was suffocating.

Although she was hardened by her circumstances, Kitty’s spirit didn’t break. Just as bitterness became her greatest strength, tenderness became her unexpected gift. She loved her yorkshire terrier, Mike, more than anything in the world, feeding her food directly from the table and carrying her everywhere she went. She reached out to her grandchildren by playing games with us in the Japanese market and buying us snacks like Pocky, chocolate-covered biscuits.

When she died, my grandmother bequeathed a doll to me. She had several in her apartment, but this one was special. It is one of the last remaining items she brought with her from Japan. The doll is beautiful and full of history, but for me the most sentimental parts are the remnants of Kitty it holds. It still smells like that sickening combination of cigarettes and Lysol, though the scent has faded over the years. The plastic case over the doll is the same shade of yellow as the tobacco-stained walls of her apartment.

Looking at that doll reminds me of that cramped apartment and Kitty’s sharp tongue. It reminds me of the suffering she endured that embittered her over the years. It reminds me that despite everything she went through and all the insults she hurled at us, Kitty could shower us with tenderness when we didn’t expect it.