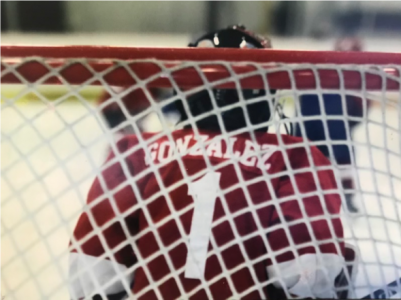 At ten years old, my younger brother Ian stands in full padding in front of the net at his hockey game. His head barely visible above the crossbar, he clutches the goalie stick in his right hand. He uses it to sweep the shredded ice that has collected around him, left to right in a semicircular motion. My father and I are standing to Ian’s right, freezing, behind the glass of the ice rink. Ian turns to his left, probably watching intently as his teammates defend him, and we see it: “GONZALEZ,” in all caps, printed in white above the number 1 on the back of his jersey.

Later as we walk to the car, each of us lugging a different piece of Ian’s equipment, my father beams with pride. He tells us that in Puerto Rico, everybody is a Gonzalez. He tells us that he never would have imagined that seeing the name Gonzalez at a sporting event would fill him with so much joy, such immense pride for his son.

My father came to the United States from Puerto Rico, alone, at 15. Though he spoke both English and Spanish on the island, he struggled for years to reach fluency in English. He grew up being one of many Gonzalezes, in school, at his tennis tournaments, you name it. 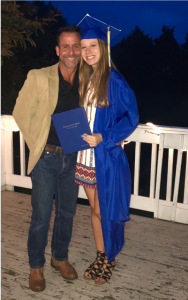 My dad and me at my high school graduation, June 2018. [Photo credit: Amy Wood Gonzalez]

He is, to put it simply, a brown person.

I am, unequivocally, not.

I was born in Florida, heard English and Spanish spoken at home as a small child, but lost a close connection with Spanish when my family moved to New York. I have attempted for many years to learn Spanish in the classroom, and am working towards fluency. My mother grew up in New York State. I inherited her caring personality, her tendency to cry at movies, her blonde hair and her white skin.

It is so important to me that I learn Spanish. This has always been obvious to me. As I began taking higher-level classes, professors would ask us why we were inspired or driven to continue taking a language. I asked myself the same question. To advance my career and communicate with more people? To feel more connected to my father? Or to prove myself to a world that regularly asks twice that yes, I swear, I really am a Latina?

When I was a child, my parents sat me down in the kitchen of our New York home to try to introduce me to the society we live in. How do you tell your six-year-old child that there are people in this world who will hate your father and people like him just because of the color of his skin? My father and I will never have the same experience. Yet I feel frustrated that the world does not validate my heritage when this heritage is the reason my father has struggled in this country so much?

It took a lot of unpacking for me to finally allow myself the phrase “my experience is valid.” As I began to hear it more and more in my college setting, knowing it was meant to validate and include everyone regardless of their experience, I struggled with believing it for myself.

My father immigrated from an island controlled by the United States. He didn’t cross illegally. He doesn’t live in fear each day of being forced to return. He has the right to vote. His experience is valid.

My mother worked for years to learn Spanish after she was welcomed with open arms into my father’s family. She quizzed us with Spanish flashcards and danced with us to Gloria Estefan. She did everything right, and yet when my brother and I lament that we did not speak Spanish more growing up, I know she feels partly at fault. Her experience is valid.

My brother doesn’t play hockey anymore. He also doesn’t take Spanish at school anymore, choosing instead to focus on art classes and exercise science. He has excelled at everything he’s felt a passion for, and language is simply not one of those things. I don’t know how it feels when somebody questions him about his heritage and he explains that no, he doesn’t speak Spanish. While he loves to brag that he always tans deeper than me after time spent at the beach, he is white like me. His experience is valid.

To my father, the name Gonzalez meant fitting in with his community before he immigrated, and standing out after he did. To my brother, it meant distinguishing himself and making his father proud in the world of sports. To me, it was my golden ticket to Latinidad. Yes, I am a Latina. See my last name. Hear my backstory, hear my stuttering Spanglish. I am one of you, or I am not one of you. This is my experience, this is why it is valid. See me, hear me, accept me.

I know now that I shouldn’t have to prove myself, or my heritage, to anybody. How much I identify as a Latina is not defined by the color of my skin, my knowledge of Spanish or my last name, and my experience is valid.