Will Iranian roots survive another generation?

I push the last few bites of kabob to the side of my plate in sheepish efforts to disguise my inability to finish the third portion I’ve been generously served.

Taking a sip of water from gilded glass, I listen intently to the conversation around me that drifts out of English into Farsi when father takes son to task in typical parental form.

The meal is brief, a Thursday dinner at my 18-year-old boyfriend Pedram’s home in the suburbs of Milwaukee before we head to high school to watch our football team scrimmage a local rival. 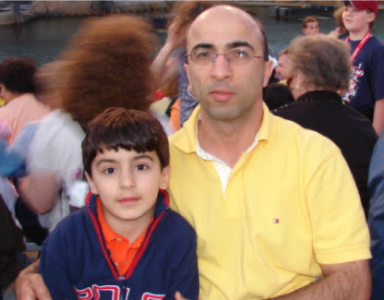 Pedram and his father Ali Sadeghi

Pedram and his father Ali Sadeghi exchange words on the game. Mr. Sadeghi doesn’t care much for football, but makes the effort to show interest as a parent’s attempt to engage a distracted teenager in dinner conversation. I notice a weariness in Mr. Sadeghi’s eyes. A long day of anesthesiology has left him with fatigue he disguises well with upbeat commentary.

The evening seems standard enough, an American family gathered with a friend on a fall evening, parents making kind attempts at light-hearted talk. As my gaze wanders around the room, the image of a typical American family shifts. I notice the intricate rugs, gold figurines, and sundry other Persian decorations that fill the room, accents of Iran that belie the outside construct of a standard suburban home. My thoughts drift from talk of touchdowns.

As I watch Mr. Sadeghi across the table, I see an accomplished doctor conversing with his son. I recall stories the doctor has told me of his upbringing in Iran.

It was the late 1970s, time of Iran’s Islamic revolution, a hostage confrontation with the U.S. and pre-war tensions with Iraq. His family was not very well-to-do and with limited opportunities for advancement in Iran, Pedram’s father decided to leave his family and most possessions behind, and travelled to Sweden to pursue an education in medicine at the University of Gothenburg. After school, he relocated in Chicago and started a family.

My boyfriend Pedram is American. He is as American as I am, which is what his father wanted when he established his family in Wisconsin after becoming a citizen of the United States. This relaxed midwestern dinner scene is the only life I’ve known and the only life Pedram has known. This isn’t the case for his dad.

Mr. Sadeghi managed to retain part of his Iranian background, marrying an Iranian woman, filling the house with accents of home, and passing along the language of Farsi to his son.

US and Iranian flags

As we talk of sports this autumn evening, it’s apparent he’s also the father of an American teenager.

What remains uncertain is how Pedram’s identity will develop in the years to come, and what connections to his father’s background will carry forward in the passing of generations.

We clear the dishes and leave. I follow Pedram outside to finish our math assignment before the scrimmage.  He talks of our weekend plans. My mind is elsewhere as I respond.