My papa may not tell me much about his Argentine youth, but there’s always football

It’s an October day in 2005 – springtime in South America. Barbed wires separating opposing fan bases may not be the custom for a baseball game. It is for Argentinian soccer, more accurately known as football. It’s my first time in Argentina and my first time at a football game.

I’m with my dad in Buenos Aires to watch his local team, River Plate.

About 10 minutes into the game, it becomes clear why his life revolves around football. The crowd is chanting song after song. Locals are banging on 6-foot drums. Confetti cascades along the pitch and unknown curse words are thrown around every minute.

Soccer is an essential part of my relationship with my father, or my “papa” as my sister and I call him. Being able to share an experience that linked my childhood with his was touching. It made me feel closer to him, being able to walk the same street to the stadium and wear the same white jersey with a red diagonal stripe. At the same time, it also conjured emotions of how uniquely different the environments we grew up in were. The language barrier was easy or us to overcome, but the distinct mannerisms and history in Argentina were not.

The stories that I heard about Argentina as a youth were mostly centered on his friend group or the passion surrounding football. Now and then, I’d get a snippet of what his life was like. The walk home from the River Plate game was one of those times.

With an orange popsicle in one hand and his hand in the other, I listened to my father recall a time that he witnessed sheer military force. When he was six, he witnessed a row of military tanks rolling down the very street where we were walking. At the time, I didn’t have much to say. I was overwhelmed by the crowd and couldn’t fully grasp what it would feel like to be that young and see military vehicles rolling down a commercial street. That very concept was so unimaginable for a New York City kid.

Stories about the political climate during his childhood started to become more common as my sister and I matured. At family dinners he would describe the oppression that local Argentines faced from the government. During one dinner he detailed the night he came back from basketball practice to find out that the government had kidnapped his neighbors. He explained the technique the military regime frequently used. Military officers would break into homes of activists and those who spoke out against the government, take them by helicopter and throw them over the Atlantic Ocean or the Andes mountains. He never saw his neighbors again. 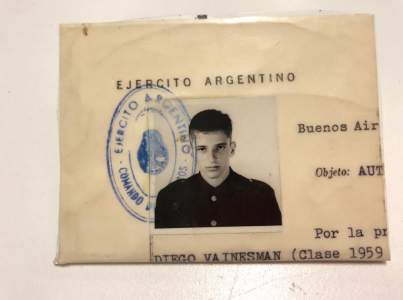 My dad’s ID card for the Argentinian military.

The last time my father was able to call Buenos Aires home was 1981. As soon as he finished his brief service in the military, he wanted to pursue his passion for the arts. At 22, he flew to Boston University to study graphic design. He had no family or friends awaiting him.

He barely understood English. After college, he found work in New York City for an advertising company. He married, and he and my mom have lived in New York ever since.

Growing up with an Argentinian father has always been my defining trait. I don’t speak Spanish and I don’t identify particularly with the culture. The only time my Argentinian side comes out is when football is on. It is what separated my papa and me from the rest of the upper east side of Manhattan. Being Jewish is what linked many of the kids who lived and went to school there. That wasn’t the case with my dad.

When my dad lived in Argentina, the Jewish population in Argentina was about 300,000 of 28 million people. Argentina’s population has almost doubled. The Jewish population is half of what it was. In addition, the numbers of Nazis who migrated there from Germany after World War II created an anti-Semitic environment that left my dad surrounded by Nazi sympathizers at a breakfast café or being an outcast in the army. When I was younger, he rarely discussed any of this. Maybe he wanted to spare me or didn’t want to relive a time when his religion wasn’t accepted.

When I walked to elementary school with my father, I often got lost in the notion that we had similar upbringings. I have the same mannerisms and similar facial features, but we experienced different childhoods. To this day, he holds back some details about his life in Argentina.

The childhood my papa wished upon himself is the one he granted me — and we have football to share.