I get a hint of my British-Jewish heritage

In a medium-sized residence near Westminster, I’m sitting around an oblong wooden table for brunch. I recognize less than a quarter of the faces present. I eavesdrop on conversations about everything from Israeli politics to local football results. I can smell the assortments of Sunday roasts, matzo ball soup, and shepherd’s pies – mostly British delicacies, with a kosher kicker. 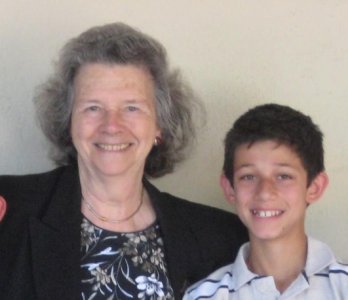 Nana and me (courtesy of Judy Wolkovitch)

I notice my Nana, livelier than I’ve ever seen her before. Her accent and outfit aren’t making her the odd woman out. She later tells me that she could count on one hand the number of times she’d met some of the attendees in person since she left England. If she kept in touch, she relied on letters, phone calls, and emails.

It all makes sense now, ten years later. Or, at least, much more sense than it did then. It was a little more than two years before my bar mitzvah, and until that point, I had no idea what the significance of the British ritual was. Every bit of preparation before the brunch had been hollow. Even the upcoming bar mitzvah itself seemed disconnected.

I had few connections to my British heritage, though Nana’s accent had persisted surprisingly well after the quarter-century she spent in southern California. I usually groaned when I had to visit her house, as it meant leaving the comfort of my own home and going to a place foreign to me. After I’d re-read the few children’s books enough times, there was nothing to do but stare at the collection of spice boxes and candleholders on the shelves, or glance at the printed-out family tree that swallowed up the larger part of an entire wall. With my bar mitzvah looming, the onslaught of questions about Judaism became unrelenting.

When my family decided to take a two-week trip with Nana to London, I didn’t know what to expect. It was my first time outside the country. I was lukewarm on the Buckingham Palace and Westminster Abbey visits. My family kept talking about some upcoming “reunion,” which would occur on the penultimate day of the trip. On that day, I was caught completely off guard by what occurred.

I had the opportunity to sample a whole new range of dishes, well outside the narrow menu that had to fit my two younger brothers and me, all picky eaters, at home. I got to speak to a couple of British children around my age, and compare our experiences. Nana’s lifelong friends and distant relatives spoke to me about their relationship with her and my grandfather, mentioning details that I had no idea about – how the two met, how my grandfather earned a patent for a new kind of aircraft wing, and why Nana was so obsessed with genealogy.

Her obsession with genealogy now had faces to it.

Nana’s husband, Julian Wolkovitch, was born a Londoner, but left during World War II due to a combination of the Nazi presence in Europe and the economic fallout that lingered. He’d completed his studies to become an aeronautical engineer before departing for the U.S., and  found steady work in Torrance and Rancho Palos Verdes, California. In 1966, he published a paper about helicopter issues that won him the Wright Brothers Medal.

That same year, he married Nana, whom he’d first met across the Atlantic. Like her husband, Nana too had British and Jewish childhood friends that were left behind.

My grandfather passed away eight years before I was born, and I had very little idea of what either of them left behind or what it meant to be Jewish 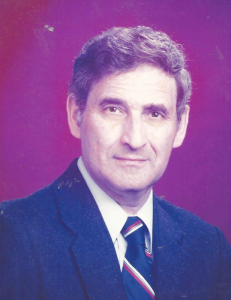 or British. Besides Sunday school, which was an insufferable chore, my only real links to Judaism were weekly Shabbat dinners and occasional interactions with Nana.

I had been told many times by various relatives about my family history, and yet I didn’t feel much of anything. Was I British? Jewish? Both? I had no notion of what it meant to be a “British Jew.”  I had only a limited sense of what each meant separately. The intersection of these two cultural foundations of my identity was a mystery.

With two years to go before my bar mitzvah, I had something to go on.