Did former President Obama abandon the Syrian people? If so, when, and how do Syrians here feel about it?

Suzanne Akhras Sahloul, Executive Director of Syrian Community Network, is one of the many Syrian Americans who had high hopes for President Obama.

“It was an inspiration and an amazing thing when he won the presidency. Obama stabilized the country after a huge crisis with the Bush administration and was very anti-Assad. Syrians were encouraged by Obama’s voice because he vouched for young people organizing fights of democracy.” says Sahloul, a self-proclaimed Democrat.

Yet, for Sahloul, Obama still didn’t handle things in the right way.

The moment when the Obama administration failed the Syrian people was in August 2013. That was when the Assad regime used sarin gas on its civilians, killing 1,400 in the Damascus suburb of Ghouta. The lack of a response is what defined Obama’s legacy, according to Sahloul. “Assad used chemical weapons. The day came when Assad used chemical weapons against his people, and Obama stood there and did nothing.” 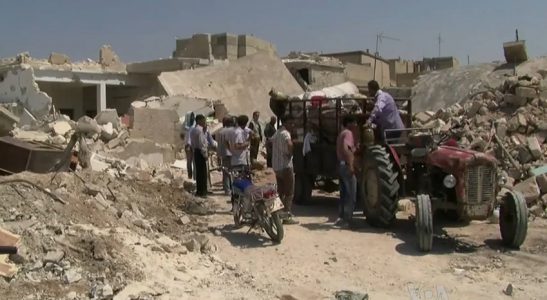 In northern Syria, residents of the rebel-held town of Azaz clean up after an aerial bombardment by Syrian government planes killed about 50 people and wounded more than 100. Click on photo to go to the video. [Photo credit: VOA News]

Not only did the Obama administration stand pat, but they broke a promise. One year before, on Aug. 20, 2012, President Obama had stated, “We have been very clear to the Assad regime, but also to other players on the ground, that a red line for us is when we start seeing a whole bunch of chemical weapons moving around or being utilized.” That line was passed in Damascus and no action was taken. [Here for Obama “red-line” speech]

Sahloul’s husband was as vocal as anyone about the struggles the Obama administration had in dealing with Assad and the Civil War. The time came when he was able to speak to Obama about Syria, claiming that how he would handle the crisis would define his campaign and legacy. To many Syrians, it did just that.

Ahlam Al-Jebory voices that the U.S. plays a significant role in protecting civilians of the middle east. “The U.S. does have a unique responsibility to serve as a sanctuary for refugees from the middle east,” she says. To the extent that Sahloul and Al-Jebory differ, Al-Jebory believes that the region woule be better off if the U.S. didn’t intervene.

Al-Jebory spent a significant amount of time in both Syria and Iraq, countries whose histories are riddled with violence and warfare. For Al-Jebory, it is as simple as “the U.S. should stay in their own business.”

Part of where this opinion comes from is rooted in America’s involvement in Iraq, beginning in the ‘80s with attempted removals of Saddam Hussein and carrying over into the Gulf War. Following Operation Desert Storm and the eventual liberation of Kuwait, the American presence was felt and felt strongly. “Tanks were going down streets half the size,” Al-Jebory describes.

Mimi Zidan, native Syrian, expresses similar beliefs to Al-Jebory. As she puts it, the role the U.S. should play in significant crises such as the Syrian Civil War should be concentrated on promoting immigration and providing asylum. When asked if the United States should let struggling Syrians in, Zidan responds by saying, “Definitely. Anything they could do to help families. They could send them to America. There are a lot of ways to help, and they need as much help because they are in danger.”

For both Al-Jebory and Zidan, the Obama administration didn’t fail the people of Syria. Militaristic intervention causes more problems than it solves, according to Al-Jebory, and the best solution for Zidan is opening the doors to those who are in need of help. To them, for the most part, Obama’s administration was a success. Raising the quota for Syrian’s during the war was an achievement, especially for a President many consider “Deporter in Chief.” However, when Assad used Sarin and Chlorine on his own civilians, the American response was not enough. Whether it is the United States’ responsibility to intervene or not is a more extensive philosophical debate. However, in the eyes of Suzanne Akhras Sahloul, this was when the Obama administration failed the Syrian people and the world for that matter.