What does it take for immigrants to start their own businesses? 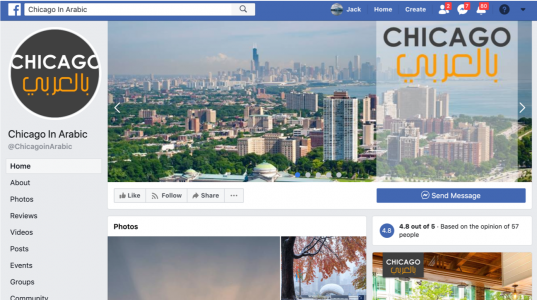 Anwar Jebran, co-founder of Chicago In Arabic, is working to shed light on some of the success stories of Arabs who are recent arrivals to the United States. He shares the voices of Arab leaders in Chicago on his podcast in hopes of inspiring Arabic-speaking immigrants who’ve settled in the city. As an immigrant himself, Jebran, 31, wanted to create a platform that shared experiences of career development and entrepreneurship in his mother tongue.  Motivated by his own experience with starting a business, Jebran wanted others to see what’s possible.

He didn’t have to look far to find successful entrepreneurship in Chicago, though the stories of the community leaders behind the businesses often remain untold and unrecognized.

Jebran capitalized on the opportunity he describes. In 2014, Jebran moved from his home in Syria to pursue higher medical training in the United States. His family moved with him and settled in Chicago.

After completing his board exams, Jebran started work as a resident physician at Weiss Memorial Hospital and conducting research at Rush Medical Center.  As he adapted to life in Chicago, Jebran watched his family struggle with the adjustment. Without the distraction of work, they found it hard to avoid thinking of the travesties occurring in the war-torn country they left behind. Media accounts of Syria didn’t help. To ease their sadness, Jebran looked for ways to turn his family’s attention elsewhere.

The idea came to him one night over dinner. Surrounded by an impressive array of traditional Syrian food, made by his mother and grandmother, Jebran realized how much others, especially Syrian immigrants looking for a taste of home, would appreciate their culinary efforts.

“Food is one of our greatest connections to home,” Jebran told me. 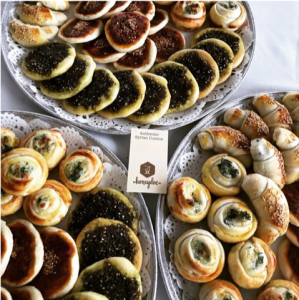 Jebran recognized the lack of authentic Syrian food in Chicago, and figured his family could fill the void. He decided to open a Syrian restaurant and catering company that featured his family’s talented cooking. Jebran’s idea was daunting to the rest of his family. Even though they sensed the dearth of authentic Syrian food in Chicago, they didn’t know where to start to create a new business.

The thought of starting a company is intimidating enough without the unknown of being in a new country with a different economic system.

Despite his family’s uncertainty, Jebran was determined to make his idea a reality. In between research at the hospital and work at the clinic, he devoted his free time to looking into the logistics of starting a company.

“It was a big uphill challenge and learning curve,” he said. “Starting from nothing is a big, big challenge. I had zero knowledge and experience in the food industry.”

Jebran reached out to friends and spent hours researching online. With months of work, he created a menu, established pricing, obtained a food certificate, and sorted out the requirements of having a commercial kitchen. In early 2016, three months after the idea was born, Jebran, his mother Rana, and his grandmother Siham opened HoneyDoe Syrian Kitchen.

The business has been a huge success.  Through social media and by word of mouth, news of the first authentic Syrian kitchen in Chicago spread rapidly. Jebran watched as people enthusiastically shared posts of HoneyDoe content, excited to see such Syrian food being made in the United States. The company’s Facebook site tells of the family’s story.

“The reaction was astounding. People would share, ‘Look these pictures are from Chicago!’” said Jebran with pride.

Although pleased with the acclaim HoneyDoe has received, Jebran doesn’t dismiss the work that was required to create a successful business. He credits his experience as an immigrant for his work ethic and the hours spent devoted to the company. Seeing the opportunity available in Chicago, after living in a country with much less possibility, inspired him to work tirelessly.

“Immigrants come and they’re so hungry to do something. They have the motivation to work. They’re coming from developing regions to a developed nation that has all this infrastructure.”

In 2016, immigrants like Jebran made up 36 percent of Chicago’s entrepreneurs and generated $659 million in revenue, according to a 2018 New American Economy report.  Over 39,000 current Chicago businesses were founded by foreign born entrepreneurs, making them 67.4 percent more likely to start a company than those born in the United States.

Today, Jebran has a more macro role in the company, working with broad strategy as his mother and grandmother focus on the day-to-day operations. Jebran hopes to motivate others in positions similar to his and encourage them to work for their dreams. He shares his story and others like it in his second start-up, Chicago In Arabic.

In October, Jebran presented at Facebook’s offices in Chicago as part of a Boost with Facebook event, a gathering designed to provide training and advice for budding entrepreneurs. He shared his experience with building and developing Honeydoe Syrian Kitchen. 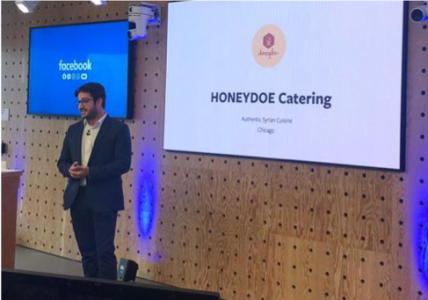 “If any immigrant can make it, anyone can make it.  It’s a great excitement,” he said.