Are there differences in cultural identities between Mexicans who came to the US years ago and those who’ve come since the Cold War?

Before throwing his hat into the ring as a presidential candidate, Julian Castro served as San Antonio’s mayor for five years, from 2009-14. As a relatively unknown figure beyond Texas, some say that his keynote speech at the 2012 Democratic National Convention was the single event that caused his leap into national prominence.

“The unlikely journey that brought me here tonight began many miles from this podium. My brother Joaquin and I grew up with my mother, Rosie, and my grandmother, Victoria,” started Castro, emphasizing his accent on the names “Joaquin” and “Victoria.” “My grandmother was an orphan. As a young girl, she had to leave her home in Mexico and move to San Antonio…my grandmother spent her whole life working as a maid, a cook, and a babysitter, barely scraping by, but still working hard to give my mother, her only child, a chance in life, so that my mother could give my brother and me an even better one.” 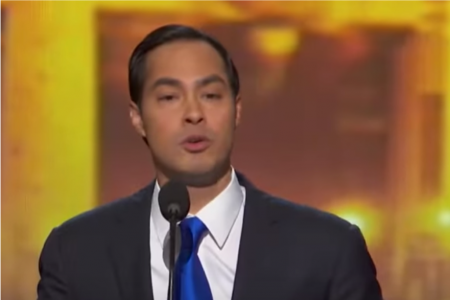 Julian Castro, giving the keynote speech at the 2012 Democratic National Convention. [Click on the photo to access video of the talk.]

Castro’s willingness to share his heritage throughout his political career shows a particularly ardent connection to his status as a third-generation Mexican immigrant. Conventional political strategy permits using one’s own immigrant background to establish a hardworking identity, but such a move is riskier for Hispanic politicians, given the controversial nature of issues surrounding the southern border.

“There’s a lot of things that remind me and bring me memories from out there, that make me feel comfortable here,” says Maria Flores, a single mother of three who moved from Durango, Mexico to Chicago in 1992. “My culture, my Mexican roots…I know some [Spanish], but my kids are fluent.”

Not all Mexican immigrants feel the same convictions. 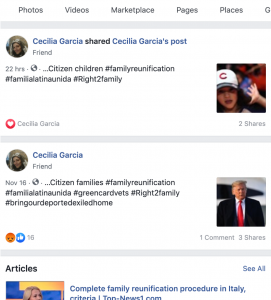 “We don’t want to forget our culture,” says Cecilia Garcia, a human rights activist and c-founder of #FamilyReunification. Her parents immigrated to the United States in the first half of the 20th century, and who acknowledges that her cultural identity, though strong, is to be less participatory. “One of the things I regret…yes, I am a white-washed child of immigrants. I never taught my children the Spanish language, because I was like, ‘What for? We’re never going to Mexico.’ We encourage [them] to remember where we come from. We encourage [them] to remember our ancestors.”

Rita Marie Velasco is a PhD student in Hispanic Studies at Northwestern University. She studies historical trends and conditions that affected Mexican immigration to the United States in the 20th century.

“One thing that seems to have changed is people’s reasons for coming to the United States,” Velasco says. “Some reasons remain the same; jobs, economic opportunity, but we see more people fleeing violence because of cartels than probably 40 years ago.”

“I hesitate to name one common feature [of cultural heritage],” Velasco surmises. “There are so many variables that go into what stays and what goes within a family or community. Things like…where you are from and where you end up [and] your age.”

“Collective ethnic awareness developed slowly over a number of years and varied significantly in content and expression depending on local circumstances, including local economic conditions, the ratio of Anglo to Mexican residents in a given area, the extent of interethnic contact, and other factors,” wrote Gutierrez in Walls and Mirrors: Mexican Americans, Mexican Immigrants, and the Politics of Ethnicity.

Originally, the “Mexican-American” label came with a negative stigma, and it was much less favorable to be identified as Mexican than American. However, as with many other ethnic identities, over time, it became a point of pride rather than shame to be a part of “la raza.”

“By the 1870s…Mexican Americans in various locales had begun to forge an affirmative sense of themselves as an ethnic minority of a larger society,” postulates Gutierrez. “In some ways it was indeed the immense challenge of adapting to a new political and social order, combined with Mexican Americans’ ongoing experience of prejudice and discrimination, that provided a basis for solidarity among a group of people who had previously had few bases of community or collective action.”

In the mid-20th century, Mexican immigrants came to be thought of as temporary “birds of passage,” making them circumstantially preferable as laborers.

“They were viewed as not coming to stay permanently but would leave once the work season was over and return again when it began the next year,” Velasco says. “Stricter border enforcement practices put in place with the Cold War made it harder to move freely across the border, so many guest workers decided to make the United States their home. The fear was they would get stuck on one side of the border or the other.

Lilia Fernandez mostly agrees with Velasco in what she calls “immigration’s salience to the Mexican American historical narrative.” In an academic review of Tomás Jiménez’s Replenished Ethnicity: Mexican Americans, Immigration, and Identity, she draws an apt comparison to illustrate her point.

“While indeed most Mexican Americans trace their family roots back to an original migration, this is true of most Americans—European Americans, in particular, who trace an ‘origins’ story of migration from Europe,” notes Fernandez. “Jiménez suggests that the presence of recent immigrants makes it more relevant and that such migration figures prominently in how Mexican Americans identify themselves.”

Graphic depicting Mexican immigration compared to total immigration into the U.S. from 1900-2010.

These distinctions shift over time and over generations. A 2013 poll conducted by the Pew Research Center found that only 3% of Mexican immigrants considered themselves “American” rather than Mexican or Hispanic/Latino, a figure which jumps to 35% and 45% for second- and third-generation Mexican immigrants, respectively. This suggests that parts of a Mexican immigrants’ cultural identity rely on firsthand memories and experiences formed in Mexico. It is also possible that American immigration policies portray immigrants as outsiders, placing them in predetermined “roles.” Or, perhaps, it could be a combination of both.

“Traditions and cultural practices are as different in Mexican states as they are between California and Massachusetts, for instance,” Velasco says. “Many places in Mexico retain their indigenous language as the first language of their residents. Linguistically, culturally, politically, every state and region has its own rich history.”

Of course, some of the greatest differences become evident during the transition between countries.

“I was confronted in a situation where my husband was deported, and my kids, unfortunately, even if we wanted to live out there, we couldn’t,” Garcia says. “But we always communicate not to forget the place we come from.”

For some Mexican immigrants, the passage is entirely personal.

“My family’s story isn’t special. What’s special is the America that makes our story possible,” Castro continued. “Ours is a nation like no other; a place where great journeys can be made in a single generation, no matter who you are or where you come from.”