Nala Chen, a college student from San Jose, recalls how the Camp Fire affected her immigrant parents. Smoke made breathing and travel difficult, but they didn’t reach out for aid because none of their property was damaged. Chen brought home gas masks for her family when her classes were cancelled, because “by the end of the first week, there was a lot of smoke within our house as well,” she says.

Similarly, a recent fire along I-80 impacted her and other students. “We could see small ash flakes in the air and we could smell something burning… On Monday, it began to hurt a little to breathe. Many students reported suffering from nosebleeds due to the air quality, and I woke up with a sore, dry, scratchy throat,” Chen says. The resident assistants in Chen’s dorm were instructed to pass out N95 masks to protect students from inhaling dangerous particles in the wildfire smoke.

Chen’s experience with difficulties in the aftermath of wildfires in California is not uncommon. Countless immigrants across the state face similar problems.

Genevieve Flores-Haro, the associate director of  Mixteco/Indigena Community Organizing Project (MICOP), a nonprofit that helps distribute masks to farm workers during the fires, says the recent wildfires in California are symptoms of inequality in the state.

In its story, “Undocumented immigrants face challenges after Wine Country fires,” the San Francisco Chronicle reported in 2017 of an immigrant, whom they called Javier who told his wife and children after the family’s house burned down, “We have to start over. There’s nothing we can do. Cry as much as you can in the next three days, because we have to rise up and do something for our life.” Javier worked in the service industry and did not have a green card. He told the Chronicle he was grateful to be alive and able to work. What lay ahead for him was to “get a house—a place we can call home and feel comfortable. That’s it.”

Chen’s parents and Javier are among many immigrants impacted by wildfires in California. The wildfires have been extensively covered by local and national news outlets from many different angles, especially as the fires increased in intensity over the last several years. In July, the Atlantic reported in “California’s Wildfires Are 500 Percent Larger Due to Climate Change” that “the past decade has seen half of [California’s] 10 largest wildfires and seven of its 10 most destructive fires, including last year’s Camp Fire, the state’s deadliest wildfire ever.” A recent study published in AGU 100 attributes the increase in highly-destructive fires to climate change, historical fire suppression and the expansion of cities into wildlands.

Many immigrants missed out on wages by missing work during the fires, and some lost their jobs, says Tania Reyes Diaz, the 805 UndocuFund Coordinator for Central Coast Alliance United for a Sustainable Economy. Many were pressured into continuing to work through dangerous conditions which left some with lasting respiratory problems. Additionally, many immigrants without green cards did not receive aid in the wake of the fires, either because they were ineligible or due to fears that they would be detained or deported.

One of the areas impacted by the recent fires is Sonoma County, a northern California community known for its sprawling vineyards. The Kincade fire destroyed 8% of the county’s landmass. Tourism revenue in the area dropped significantly. This year, occupancy rates have dropped to 75.6% from 80.9% in 2018, according to Travel Market Report’s article, “Sonoma County is Open for Tourism.” While Sonoma and other affected counties are hurting as a result of the recent fires, some communities are left especially vulnerable. According to the UndocuFund for Fire Relief in Sonoma County, an estimated 38,500 immigrants without green cards live in the county, making up about 7.6% of the population.

Farm workers—75% of whom are immigrants, according to the latest National Agricultural Worker Survey data—were impacted by the fires in ways others weren’t. According to NPR’s “Many California Farmworkers Forced To Stay Behind During The Wildfires,” as many as 36,000 farm workers remained working in the fields during the Nov. 2018 Woolsey Fire, even as the fire sent clouds of suffocating smoke into the air.

Farm workers working outside as fires rage nearby are subjected to similar or worse conditions. “My eyes burn. My throat is irritated. 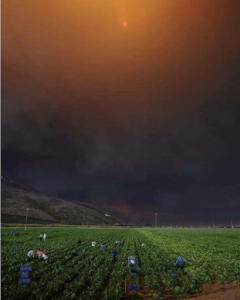 I know we should leave, that it’s not good for us to be here,” said Filiberto, an immigrant who spoke with the Washington Post.

The Post reported in its story, “During California wildfires, farmworkers say they felt pressure to keep working or lose their jobs,” that many farm workers lacked proper respiratory protection. Some farmworkers were not provided with protective gear such as N95 masks. Some were only given one to last a week. They’re supposed to be thrown out after a day of use. Still more did not take the protections provided because language barriers prevented them from understanding whether they were allowed to take a mask. 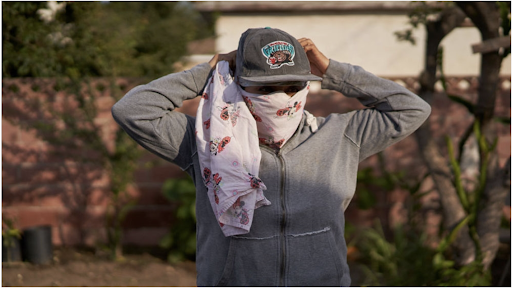 Flores-Haro is concerned about the content of the smoke many are inhaling. “We say wildfire, but it’s not trees or pine that’s burning. It’s people’s homes, it’s paint, it’s chemicals, asbestos,” she says. “There are these really hazardous things that are floating around in the air.”

Domestic workers, too, were impacted by the fires. In its Oct. article, “Getty fire: Housekeepers and gardeners go to work despite the flames,” the LA Times reported that while Los Angeles residents were ordered to evacuate their homes during the Getty Fire, domestic workers continued to report to work. Many of the domestic workers were unaware that their employers had evacuated or even that it was dangerous to spend time in the areas where they worked because of the smoke, the story reported.

“I should just go home. They didn’t tell us. They need to tell us not to come in,” Marcela Aquino, one of the domestic workers, told the Times.

Immigrants in the area are also facing housing insecurity and displacement in the wake of the recent fires. According to the New York Times’s “As Fires Move On, Wine Country Wonders Whether Immigrants Will, Too,” the problem looms especially heavily over those who lost their homes in the fires, but as a result of losing wages or their jobs, many—even those whose property was not damaged by the fires—are unable to pay rent in wine country.

Immigrants who earn $40,000 annually often pay $1,800 a month in rent in Santa Rosa, and anecdotal evidence suggests that prices have risen after the fires, the article reported. 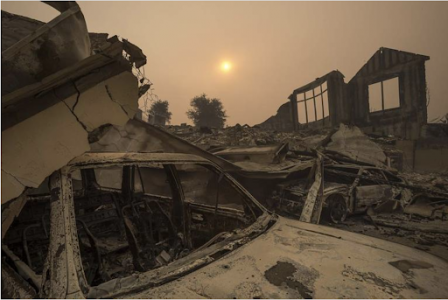 Many immigrants lost their homes as a result of the fires or lost wages. Rincon Ridge area Santa Rosa.(Photo credit: Paul Kitagaki, Sacramento Bee) Click on the photo to go to the photo and Sacramento Bee story]

Many mixed status immigrant families have concerns that they will be targeted for deportation by immigration officials. This has led some families to avoid going to shelters and caused problems for those returning to their homes as evacuation orders are lifted. Those who avoid going to shelters for temporary housing and assistance fear that they will be asked to confirm their legal status, according to a 2017 article in the Sacramento Bee.

Identification requirements are often instituted in the wake of fires as evacuation orders are lifted and can cause difficulty for immigrants without green cards. In the wake of the Oct.-Nov. 2019 Getty fire, the Los Angeles Fire Department website stated: “ALL EVACUATIONS ORDERS HAVE BEEN LIFTED. Residents within the former evacuation zones will be allowed to return to their homes. Residents will be required to provide identification and proof of residence.”

The Bee reported that such orders throw “a spotlight on the frayed relationship between government and undocumented workers.”

“We’re not a disaster relief organization, but because of these fires we’ve kind of had to morph into this rapid response kind of thing to provide for the gaps that are there,” Flores-Haro says of MICOP’s efforts to aid immigrant communities in the wake of the fires. “Unfortunately, we’re getting good at it.”