“There’s a lot of comments from people. They’re being taken, anywhere, everywhere, anywhere you go,” said one Chicago resident* about the fears of arrests and deportations in Chicago, a city known to be a welcoming or sanctuary city.

The person is an immigrant without a green card, who emigrated from Mexico over 25 years ago. ”I’m on probation for three years. I’m scared they might deport me…My son is diabetic. If I were to leave, I don’t know what he would do.”

This person’s fears aren’t unique among Chicago immigrants, many of whom rely on Chicago’s welcoming city policies to maintain their rights and safety. Many cities and counties across the nation are in the midst of litigation battles related to these policies, and Chicago is no exception.

Sanctuary has become a focal point for immigration advocacy.

Sanctuary is bigger than the city

Maria Ferrera is an Associate Professor of Social Work at DePaul University. A child of Filipino immigrants, Ferrera co-authored a petition asking DePaul to become a safe haven for all students, regardless of citizenship status.

The political and legal history of the sanctuary city is fraught with conflict. As a term without a consensus legal definition, clashes between local and national law enforcement and the withholding of federal funding based on sanctuary city policies have set the stage for the policies to be used as proxies in the political battlefield. Many political analysts have even suggested that certain Trump administration appointees were chosen for the sole or primary purpose of combatting these laws.

In an Oct. 2017 tweet, President Trump disseminated: “Hard to believe that the Democrats, who have gone so far LEFT that they are no longer recognizable, are fighting so hard for Sanctuary crime.”

Chicago had off-and-on de facto or less-encompassing sanctuary policies since 1985 when then Mayor Harold Washington signed an executive order ending the city’s practice of asking job and license applicants about their U.S. citizenship and halting cooperation by city agencies with federal immigration authorities. The policies evolved into a more comprehensive set of practices that were enshrined into law in 2012, and reaffirmed in 2016, when then Mayor Rahm Emanuel signed the Welcoming City Ordinance, which prohibited arrests and the denial of public services based on citizenship status, but didn’t fully prevent cooperation with the federal government. 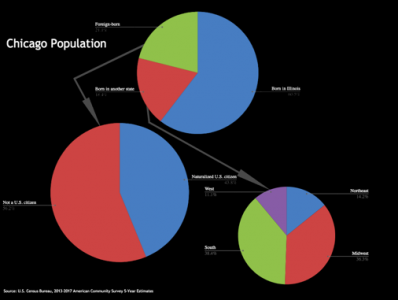 According to a 5-year survey conducted by the U.S. Census Bureau, over one-fifth of Chicago’s population is foreign-born, ranking it among the most immigrant-dense cities in the nation. Many proponents of the city’s sanctuary policies worry about the negative stereotypes that would persist in their absence.

Chicago is somewhat late to the party among major left-leaning cities to fully codify these protections. Los Angeles (1979), San Francisco (1989), Minneapolis (2003), and others all have long-standing ordinances in place. Smaller cities and even some red-state towns are gradually passing similar measures.

Political critics on one side decried Chicago’s Welcoming City Ordinance, arguing that it would lead to an uptick in criminal activity, a claim which is not supported by short-term city data. Critics from the other side have argued that the 2012 and 2016 provisions aren’t enough. Later laws, such as the TRUST Act, which former Illinois Governor Bruce Rauner signed in 2017, expanded on these rights slightly, applying the provisions throughout the state and requiring a warrant for federal searches.

The debate over the potential repeal or expansion of the ordinance and state law became such a hot-button political issue in Illinois that it played a key role in the recent elections of Chicago Mayor Lori Lightfoot and Illinois Governor J.B. Pritzker. Mayor Lightfoot held frequent discussions related to the carve-outs that allow Chicago police to cooperate with ICE.

“The Welcoming City Ordinance still does have carve-outs that allow Chicago police to work with ICE when there are raids in the city,” said Aarón Siebert-Llera, an Immigrants’ Rights Attorney at the ACLU of Illinois. “There is a desire, there are groups working to get those taken out of the Welcoming City Ordinance, and for all I know, Mayor Lightfoot is pretty open to working to do that.”

Among other American cities that have sanctuary policies, the extent of the policies vary. The right of local law enforcement to inquire about an individual’s citizenship status can depend on various factors, including people’s criminal records, the existence of arrest warrants, and the suspected category or severity of an offense. Some cities, including Chicago, forbid city police from making  arrests based on immigration status while allowing the federal government to do as they please, as opposed to cities such as Seattle, which have wider-reaching sanctuary protections, more severely limiting cooperation between the city and ICE.

“Because the awareness is high here, we’re more inclined to be successful in protecting immigrants in terms of disseminating information and raising further awareness,” Ferrera said. “It does help if the mayor in Chicago continues to value this idea of sanctuary. [The city doesn’t] penalize organizations and churches that create different types of sanctuaries, and the message to police officers and authorities is that they’re not working with ICE agents.”

Besides having welcoming cities, there is a Welcoming Rural Initiative, in which smaller towns are getting themselves designated as welcoming communities, Siebert-Llera said. The initiative has started a competition in which in nine rural communities will be chosen to receive technical assistance, coaching and access to ongoing learning opportunities. “There’s an awareness by a lot of people that immigrants bring a lot of value to a lot of communities, and there’s a definite need to demonstrate that, ‘You’re welcome here, and you do not have to worry, at least within the power of local law enforcement or local officials.’”

Of course, it may be more difficult to pass far-reaching measures in more politically neutral areas, so these victories are not the end goal for most immigrant advocates.

“Just because you have a Welcoming City Ordinance does not mean that you’ve created some sort of oasis where immigration [ICE] is not allowed to come in and conduct raids or arrest people,” Siebert-Llera said.

“We are a country of immigrants,” in which people should be proud to say, “I immigrated here to the U.S. when I was 13,” said Lesley-Ann Brown-Henderson, Executive Director of Campus Inclusion & Community at Northwestern University. ” To make it seem like all immigrants are illegal, or dangerous, or don’t want to contribute to this country, or don’t contribute to this country is ridiculous,” she said and added, “Perpetuating this narrative is harmful.”

“I use my role as a scholar-activist to challenge a lot of narratives we hear about the complexity of the immigrant experience,” Ferrera said. “There’s a lot of historical trauma in the context of immigrants in the United States…we have to be challenging this single narrative that’s more negative and stigmatizing and stereotyping.”

Much of the anti-immigrant rhetoric has come from Donald Trump himself.

“A lot has been just words, but the goal is more than an actual raid,” said Siebert-Llera. “A lot of it is that the words are being used as weapons, in a way.”

There have been attempts at retaliation from officials, such as Robert Guadian, newly appointed Director of the Chicago Field Office of ICE. Guadian’s support for a nationwide enforcement campaign or former U.S. Attorney General Jeff Sessions’ threats to prosecute uncooperative local law enforcement agencies and withhold funding from those areas reinforce Trump’s rhetoric. Trump himself has yet to make good on his promise to deliver a “monumental weekend raid,” but the threat of federal action is still unsettling for immigrant communities and advocates who are counted on to know the law and impending actions.

“You always have to believe it could happen on that scale because we’ve seen plenty of things happen over the past two years that we would have never anticipated happening with the President,” said Siebert-Llera. “Unfortunately, whenever we hear some of these outlandish statements made either through Twitter, at rallies, wherever else we see these statements being made, you have to at least listen to them, as there is that potential of [them] becoming reality, because a lot of what’s threatened has become reality.”

[Listen to how Aarón Siebert-Llera tries to clarify the policies and the limits of how secure immigrants can feel with the sanctuary policies in place.]

The courts are a venue of choice

Many of Chicago’s litigation battles on the issue are ongoing. Legal victories in other major cities may provide hope for Chicago’s immigrants and immigrant allies.

“We’re living in an environment [where] the future here is very uncertain,” Ferrera said. “It has to be a hyper-vigilant environment to change that.”

Thus far, the ACLU of Illinois seems to be winning the majority of battles statewide, and recent lawsuits filed against Ogle County and Stevenson County over enforcement-related TRUST Act violations from sheriffs’ departments are currently ongoing. Siebert-Llera is confident the trend will continue in all parts of the state.

“[The plaintiffs are] not doing this to get money out of it, any kind of potential damages would be fairly miniscule,” Siebert-Llera said. “They don’t want anyone else to go through what they went through, to experience the same things they did, to make sure local enforcement are following a state law.

Much remains uncertain in Chicago. Once touted as the city’s greatest crime-fighting tool, the infamous gang database is the focal point of multiple lawsuits that are still in their initial stages. Critics say that the database relied on privacy violations for collection methods, acts as a powerful weapon for ICE, and is overly broad in its listings. An outdated version of the database reportedly lists as many as 134,000 names, far beyond prior gang estimates. Chicago’s Inspector General concluded in April that Chicago police have done little to make sure the database information is accurate, and that the result is that the misinformation has caused lasting damage. ProPublica Illinois reported that the database, now called the Criminal Enterprise Database, has been accessed by federal immigration officials 32,000 times.

“The CPD has outright refused to work with impacted communities in developing a fix to this problem and has also refused to place additional safeguards for juveniles labeled as gang members,” said Karen Sheley, Director of the Police Practices Project at the ACLU of Illinois, in a public statement. “Chicagoans deserve to know why.”

Chicago’s Welcoming City Ordinance is, seemingly, the compromise neither side is comfortable with.