It’s Saturday in late Sept. 2019, in Pilsen, and Francisca Lino is making a sign with a marker and paper in the front hallway of the Lincoln United Methodist Church (LUMC). “No use esta puerta use la del jardín,” the sign reads. She tapes it above the shattered glass on the front door, adjacent to a sign with the message in English: “Do not use this door, use side door.” 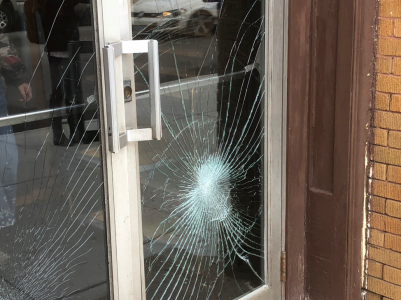 Just a few days earlier, the front doors of the church were kicked in by a man attempting to break and enter. The attempt was linked to other recent acts of violence targeting the church for supporting people, like Lino, seeking sanctuary. For two years and three months, Lino has been living in Adalberto United Methodist Church, a church that is of the same congregation as Lincoln, in sanctuary from Immigration and Customs Enforcement (ICE) after an order was issued for her deportation.

Lino came to the United States from Zacatecas, Mexico, in 1999. She lived in Chicago, met her husband Diego in 2000, and the two soon started a family. The family lived together for years until Lino was notified that she was being deported during a scheduled ICE check-in in March 2017. She asked her husband to drive her to Adalberto church, where she sought sanctuary, according to the Chicago Tribune.

She and her husband were reunited briefly this year in July, after which she returned to the church.

She says that there have been no violent incidents at Adalberto to date, though the violence towards Lincoln has caused her to fear. “There have been a few times now that people have tried to do things to this church,” she says in Spanish, gesturing toward the front door. She surmises that the violence has been motivated by LUMC’s support of immigrants without green cards. “They don’t want this church helping people and letting them stay here,” she says. “This worries me a lot that they know I am in the other church, that maybe they’ll try to do something to me.”

The person who walked around Pilsen openly terrorizing the church on his Facebook site is Ben Bergquam whose 50-minute video on Frontline America with Ben Bergquam shows him entering the church intending to confront the pastor, as he put it, and arguing with Pilsen residents about his First Amendment rights as an American.

Though Chicago identifies as a sanctuary or welcoming city, Lino doesn’t think the majority of Chicagoans are in favor of the movement, citing experiences she’s had of harassment and doubt from people of various races and origins, including her own. “At the other church, people pass by saying ‘in that church they have cucarachas,’ or ‘they have rats there.’ They’ve yelled at me, ‘you damn cockroach, why don’t you go back to your country?’” She says many people without green cards are anticipating the day that they will be told to leave and that they have never thought of this country as theirs. They don’t understand her insistence on fighting back in a country that’s not hers.

Each day, Lino wakes up in the apartment above Adalberto where she stays and reflects on her situation. “Sometimes it’s pretty difficult and I don’t feel like getting out of bed. I feel depressed. I don’t feel like doing anything. But I try to help out around the house where I live, however I can.” She spends her days knitting flowers and fastening them to the tops of pens, which the church then sells to help support the sanctuary.

What motivates her to stay and continue the fight is her family. Lino has a husband and five children. Staying unified as a family is of utmost importance to her. She is not able to live with her children or her husband, and sees them currently only on weekends. Though she isn’t able to spend much time with her husband, she recognizes that they share a special connection as a couple.

“He supports me through expenditure and also just by being there for me,” Lino says. “We have something special.”

Over the course of her time in sanctuary, her daughters have fallen behind in school; one of them attempted suicide, telling her mother that she didn’t want a life here without her and she wouldn’t have a life in Mexico. Lino recognizes that her children have no strong connection to Mexico. “I know that I would be better in my country than here,” she says of her current situation. “But my children, who were born here, would not be better off.”

Lino hopes that she will be able to stay as long as possible in order to be a positive, present force in her daughters’ lives, keeping the family together and strong in the United States.

“If God wants me here, then this is where I’m going to be,” she says. “My children were born here and they have every right to be here. I’m going to fight so I can be with them. I guess what motivates me most is that my children can study here and that we can all be together.”

In terms of her legal case, her current solution involves staying in the country in sanctuary as long as possible in hopes that the law will change, or a new law will be passed. Her lawyer argues that if she leaves the country, she can attempt to re-enter based off of an asylum claim.

“My lawyer says that if I leave, I will be able to try to come back seeking asylum because there is so much danger in my country,” she says. “I would be afraid to go back, but for now, I can either leave or stay here and wait.”

Lino maintains hope that new legislation will be passed to protect people in her situation. Familia Latina Unida (which translates to Unified Latin Family), a Chicago activist group that works closely with Lincoln, has promoted many petitions encouraging local legislation that can protect immigrants without green cards.

Lino hopes that if she is able to stay here and win her case, perhaps other mothers who are in her situation will be able to as well. “There are a lot of kids who are going through the same thing as my kids and that hurts me,” she says. “It’s not fair that they treat us this way when all we want is a better life.” She firmly believes that children who were born in the United States have every right not only to live and study here, but also to have their parents with them, to have a unified family so that they can succeed.

Lino greets other community members as they file in for the meeting. They embrace her one by one, saying it’s a miracle that she is there, catching up about their families and children. For others in her situation, Lino advises them to keep fighting and never give up. “We have to fight to the end, because we have to end all this racism. We haven’t done anything to anyone. We are just looking for a better life for our children.”