A Syrian asylum seeker who loves Chicago laments, she wasn’t safe in Syria and somehow isn’t safe here either

As the chill of winter descends upon the city, Chicago residents like 28-year-old Heba Kalaji brace themselves for a season spent indoors. For Kalaji, the cold weather means fewer bike rides along the lakefront. The rides are Kalaji’s favorite way to enjoy the city she loves, one she has only recently come to consider home.

Kalaji grew up in Syria, moving from Saudi Arabia to Damascus at the age of three. It has been just two years since she left home to pursue a better life in the United States. 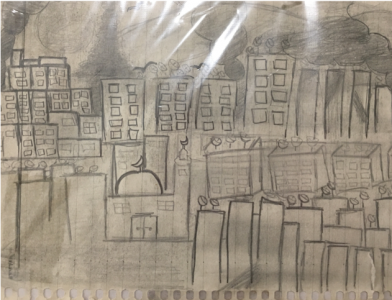 Sketch by Kalaji of the view from her bedroom window in Damascus.

Kalaji’s decision to relocate to the U.S. wasn’t made on a whim. Ever since she visited the country at eight years old, Kalaji knew she wanted to return permanently someday.  The only family member able to obtain a visa, Kalaji accompanied her mother for a medical consultation and found the U.S. fascinating.

Civil war had overtaken Syria when Kalaji was in her second year of medical school in Damascus. Her aim to relocate to the U.S. became an encompassing mission. She wanted a new life, one in which she wouldn’t be “trapped by cultural and traditional restrictions.”

Her dream became a reality in the fall of 2017. Just as she was losing hope of finding a way to the U.S., Kalaji was issued a visa. Her siblings, wanted by the Syrian government, had already relocated to Germany. On the evening of Oct. 5, Kalaji said goodbye to the only life she’d ever known.

Her mother was the only person present for the farewell. They shared a rotisserie chicken, Kalaji’s favorite meal. As she prepared for departure, the electricity went out as it often did.

“I remember walking through each room and even though it was really dark,” she recalled. “I could close my eyes and remember a lot of things. My mom went down the stairs with me and then that was it.”

At seven p.m. a taxi took Kalaji to Lebanon, the first stop on her journey to the U.S. She brought with her letters and writings from loved ones. To her, they were “the most valuable things.” Just two days later, Kalaji entered the U.S. and filed for asylum.

Alone, Kalaji was thrust into life in a foreign country. She didn’t know how to start or where to go. With the guidance of a doctor she met through the Syrian American Medical Society website, Kalaji chose Chicago as a place to settle. In the past two years she has grown attached to the city. The crowded sidewalks and bustling traffic remind her of home in Damascus.

“The city of Chicago is very comforting to me. It’s a very beautiful city to me,” Kalaji said. “I love that the roads have a lot of cracks. It reminds me of home a lot.” 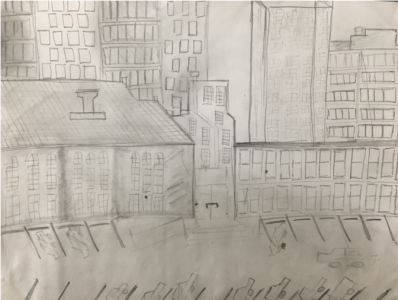 Sketch by Kalaji of the view from her bedroom window in Chicago.

Kalaji is happy with life in the U.S. She appreciates simple things like listening to podcasts, a pastime forbidden in Syria. The freedom of individualism has been liberating.

Kalaji hopes life in the U.S. will be permanent. Her biggest fear is that she will be forced to leave her new home in the country she loves.

“Even though I’m really comfortable here, trying to get settled in, sometimes I feel like what if after all this they’re like, ‘Oh you’re deported.’ I didn’t feel safe home and somehow I don’t feel safe here either.’”

Since she arrived, Kalaji’s been looking for a residency position in internal medicine. In the interim, she works in housekeeping for Chicago residents like Hilarie Huscher. Huscher says Kalaji thrust herself into the job with gusto, determined to do the best work despite having higher education in the medical field.

“It’s been a wonderful experience to watch her do all of this,” Huscher told me. “She is nothing but a positive force,” 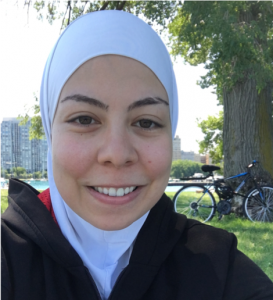 Huscher has helped Kalaji settle into life in the U.S., taking her for car rides to practice for driving tests and sharing books. Watching her take the board certification exams and travel for interviews, Huscher is confident that Kalaji will advance in the medical field.

“I know she will do something very successful here. She’s been wanting to be a doctor since she was very young, and it’s been wonderful to watch her come here and pursue it,” Huscher said.

Recently, Kalaji has been taking courses with Upwardly Global, a non-profit organization designed to help immigrants and refugees rebuild professional careers in the U.S. She hopes the classes will help propel her medical career.

Kalaji is positive about her life in the U.S. However adjustment to an entirely new life is never easy. In order to stay in the U.S., Kalaji’s asylum petition must be granted.  If it is, for her, it’s a commitment to life in the U.S.

“It’s not that I want to go back. It’s just the feeling sometimes. It’s hard to not even have the idea of going back if I would want to,” she told me.

It’s been almost eight years since the whole of Kalaji’s family was together. Living without them in Chicago can be lonely at times.

“I miss the feeling that you’re known, you somehow belong,” she said. “No matter how hard you try to fit in, you’re just a stranger.”

Upon arrival in Chicago, Kalaji reached out to organizations designed to provide therapy to refugees, but was put on a waiting list. She still hasn’t received the services she seeks. Most support has come from individuals like Huscher.

“It’s amazing that people come with such enriched offerings, and when we see someone like Heba, we should really take advantage and help them along the way,” Huscher told me.

As she moves forward toward a career in medicine, Kalaji embraces all opportunities that present themselves with enthusiasm and determination. She hopes to find a residency and become a medical professional in the country she now calls home.