My mother jumped out of a crashing truck when she was 17.

She tells me the story for the first time when I’m home, taking a break from college. I’m on the living room carpet, looking up at where my mother sits on the couch. The Chinese soap opera she was watching still plays on TV, the volume muted. She usually begins preparing for bed at this time, but I’ve captured her attention.

It’s unclear how my mother and I begin our conversation and arrive at this story. In the past, we rarely had sincere conversations, but since I’ve been home, it’s been easier to be open.

It’s May of 2019, and I’ve spent the last six months at home. My first quarter at Northwestern had been disastrous, my mental health deteriorating to the point that staying in Evanston was no longer safe. I returned to Houston and started a cycle of therapist after therapist, psychiatrist after psychiatrist. Despite everyone’s best efforts, I sunk deeper and deeper into a state of isolation and hopelessness. 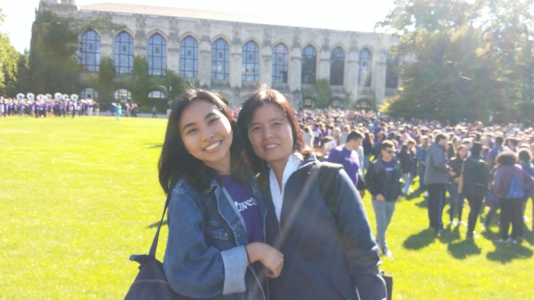 My mother and me on Northwestern’s campus. At the time, I was incredibly excited for my freshman year. We were both unaware of how the next few months would play out. Wildcat Welcome 2018, Northwestern University [Photo credit: my dad (Wuguo Deng)]

Tonight, I listen to her stories about growing up in China at a time of cultural upheaval, in an impoverished rural village. She tells me about sleeping on the roof of her house in the summer, about her dedication to her education, about her conflicts with her parents. I get the sense that it’s been years since she’s talked about these memories with anyone.

She tells me about the time that she was hitchhiking home from school and got into a truck with a stranger. She holds onto the belief that people were less malicious back then, and that you could trust people you didn’t know. I hang onto her every word as she talks about crossing a bridge when the driver began to swerve. As she recalls, she thinks he fell asleep at the wheel and the truck veered toward the side of the bridge. In that split second, she jumped out onto the road, severely injuring her legs and passing out. People from a neighboring village came across the scene. They saw the capsized truck in the river below and my mother laying broken on the pavement. She says that she was bedridden for months afterward. She didn’t think she would graduate high school.

She tells me this at a time when I resent myself for being weak and ashamed of my situation. She knows that I’m afraid I’ve ruined the life I’d meticulously planned for myself.

A part of me often blamed my parents for the state of my mental health. As a first-generation American, there was pressure about grades and a sense of alienation from my “more” American friends. Possibly the most oppressive feeling was that being Chinese meant that I wasn’t allowed to be depressed. Integrated into it all was that affection felt like an act of vulnerability. “I love you” was rare in my household when I was growing up.

When I was sent to the hospital the November before I came home, my parents didn’t know what to do. They came from a place where speaking about mental health was taboo. My parents didn’t trust psychiatric medication, and they didn’t understand the concept of a therapist. There were certain things you didn’t talk about, especially with strangers, even the ones you’re paying. This was the first time they saw a part of me that I’d kept hidden from them since I was 13.

As I sit in the living room, listening intently to my mother, I can feel the disconnect between us mending. She becomes 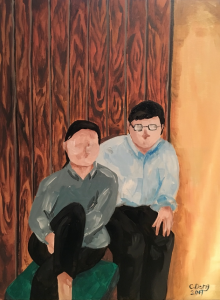 A portrait of my parents that I painted in March 2019. This was based off of an old photo from the 1990s, after my parents immigrated to the U.S. before I was born.

more human to me. I see her flaws and her dreams. She tells me about meeting my father and about making the decision to immigrate to the U.S.

Growing up, I searched ceaselessly for confirmation that my parents loved me, reading our lack of communication as signs that they didn’t. But here my mother is, saying that even before I was born, before I was even a solid idea, she wanted to make a better life for me.

My mother’s behavior changed post-hospital. She needs me to know that she loves me unconditionally. She tells me every day. It’s a subversion of cultural expectations, but for her, being Chinese means providing anything and everything so that her child can live a better life than hers. It means the little things like giving me the best parts of a meal,  the in-between things like saving for my college tuition and the big things like holding me when I can’t stop crying.

It means being here, past her bedtime, in the living room, talking to her daughter.