I get off the plane in Toronto. I rush through customs and quickly grab my bags at the baggage claim. I see Svati standing there. It’s a late January night, and it’s cold. 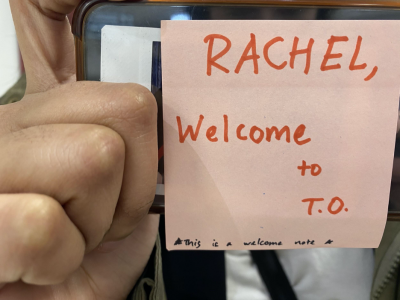 Svati holds a welcome sign as she greets me. (Photo credit: Rachel Baldauf)

She’s holding a welcome sign in the form of a tiny post-it note with the words, “RACHEL, Welcome to T.O.” She tells me that she couldn’t find a piece of paper big enough for a proper welcome sign.

We share a laugh and a long hug. The last time we’d hugged was in August when Svati left for her freshman year at York University.

Svati hadn’t expected to go to college in Canada. She’d always dreamed of attending a four-year university in the States, but her situation was complicated. She was certainly qualified. She was a straight A student, an active member of Model United Nations, French Club president and the editor-in-chief of the school newspaper. But she’d come to the United States from India on her father’s work visa her junior year and was considered an international student. This disqualified her from much federal aid and ballooned the cost of tuition.

Undaunted, she prepared to begin classes at the local community college, even though it meant biking roughly eight miles to get there in the morning and another eight to get home.

But just a few weeks before classes began, Svati got an email from York University. She had almost forgotten that she’d sent in an application. The email that notified her of her acceptance also notified her that classes were to begin in two weeks. Svati was overjoyed at the prospect of attending a prestigious university, but she had a lot to think about. If she accepted, she would have to scramble to find housing, pack and move to Toronto immediately. She’d have to go alone. According to the terms of her family’s visa extension, if any member of her family left the country to go anywhere except India, they couldn’t come back.

Despite her fears, Svati decided, for the second time in her 18 years, to uproot her life. She packed her belongings into two small suitcases and left.

During our frequent phone conversations leading up to my visit, Svati told me that her life at York was sometimes lonely. Her dorm room was tiny. The weather was bitterly cold, much different from her home of Chennai and her adopted home of Southern California. While others spent holidays home with their families, Svati holed up in her dorm and focused on her studies.

We texted and video-called often. Both of us agreed that virtual meetings are a poor substitute for the real thing. For months, we counted down the days until my visit. 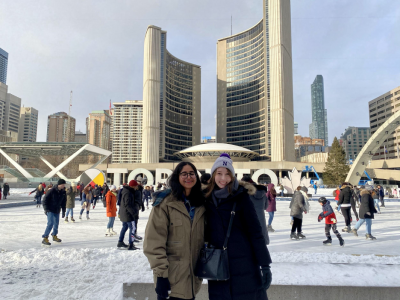 Svati and I pose in front of the Toronto sign in Nathan Phillips Square.

When the trip finally arrived, it was even better than I imagined. The weekend was filled with snow flurries and arctic temperatures. We hardly felt the cold as we toured the city at breakneck speed. She taught me how to navigate Toronto’s labyrinth of subway lines and showed me where I could get the very best dosas in the city. We flew through cafes, museums, theaters and plazas.

When Svati first arrived in the US, I was the one who toured her around. When I learned that she had never been to Los Angeles (save for LAX), I took it upon myself to give her the grand tour. I excitedly took her to my favorite landmarks, restaurants and beaches. I agonized over our itineraries, picking spots that I was sure she would enjoy. I took pride in showing off my city, but most of all, I wanted to make her feel at home.

Now, Svati was returning the favor. She had clearly done her homework. Every stop on our itinerary had been methodically researched and planned. Throughout the trip, I could feel Svati eyeing me with anticipation, hoping to see that I was enjoying myself. I knew that feeling. It was precisely what I’d felt when showing her Los Angeles.

When the weekend came to an end, we rode the subway back to the airport. As we said our goodbyes, tears welled in the corners of my eyes. While I was sad to once again leave my best friend, I also felt immense pride in her resilience and strength. 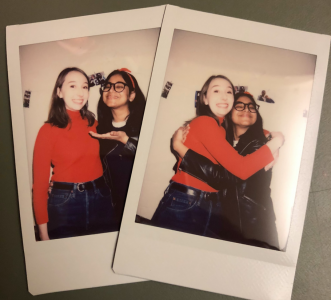 Svati and I take two polaroids to keep as souvenirs of the trip (photo credit: Svati Sundararangan)While I was sad to once again leave my best friend, I also felt immense pride in her resilience and strength.

As I came in for one last hug, I whispered “You’ve got this.”