The heart of our home is in the kitchen, where my grandfather and I sit at the table in the late afternoon. In front of him is his prized wooden cutting board, with its fancy scalloped handle, laden with peaches that he slices with a paring knife and deft fingers. There’s a rhythm to his work; cut, share, eat. Every other slice goes to me. Underneath the peaches, the paper towels he laid down were soaked through, saturated with the sticky juice. 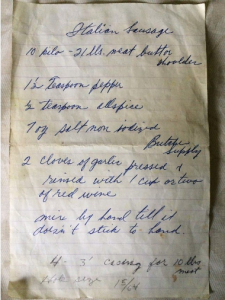 My grandfather’s handwritten recipe for homemade Italian Sausage, one of his specialties.

My mom and I had traveled from our home in Minneapolis to visit my grandmother and him for a week. It was August, and that meant only one thing: the peach harvest. The peaches were all he could talk about for the first few days we were there. One sunny morning, he, my mom, and I had packed his walker into a van and drove to a little farm about an hour outside of Detroit to buy a crate of those prized peaches.

Most of the memories I have with my grandfather, like this one, revolve around the sharing of a meal in his kitchen. He was Italian, after all. He showed his love through sharing his love for food.

Even though our Italian heritage is a point of pride, my immigrant family Americanized and assimilated during the twentieth century. My 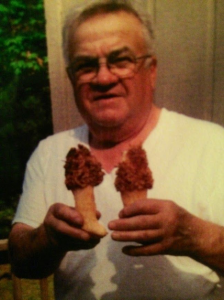 Every spring, my grandfather would probe into the woods of northern Michigan to hunt for morel mushrooms, another local delicacy he integrated into his cooking.

grandfather, Benjamin Fortunato Gaioni, whose parents were called Beniamino and Caesarina, named his children Melissa and John. My grandfather did not speak Italian at home, but he wrote it in letters that crossed the ocean and made it to his family, our family, in the Alps, in a town called Bergamo. He adapted his recipes to the food available to him in America. He took up hunting and fishing and put the venison in his Italian sausages and fried the fish in the summer. His love for pure Michigan peaches is a result of this adaptation in a new country.

After my grandfather’s passing in 2014, it felt like our ties to Italy were severed. Today, I can find echoes of our culture if I look in our rosaries, our recipes, and our bastardized Italian sayings. We like to call a feast a “mangia-thon,” which comes from the Italian mangiare, to eat. Sometimes these echoes aren’t enough. During Italy’s coronavirus outbreak, my family’s town was at the epicenter outside of Milan, where they still live today. My ability to speak Italian is not molto bene, so my cousin Gerardo messaged me to say he was okay using emojis. After all, a thumbs up needs no translation.

I’m actively trying to pick up the language now that the pandemic has spurred me into action. I have an account on the language learning app Duolingo and it has taught me how to say things like “the family is in the kitchen” (La famiglia è nella cucina). One of my American cousins is doing the same, trying to reconnect with our family an ocean away. Thinking about it now, there is an element of irony. The Spanish Flu killed many of my family members in Italy during the early 1900s. This loss spurred my great-grandfather to make the choice to take his family to America for a better life. A century later, a second pandemic is pulling us back.